This past winter, I replaced my old rusted-out smoker with a new MasterBuilt Sportsman Elite smoker. The smoker was being stored in an storage cabinet on the deck that developed a leak, which led to an unfortunate surprise a couple of years ago. It still kind of worked, but it was time to replace it. 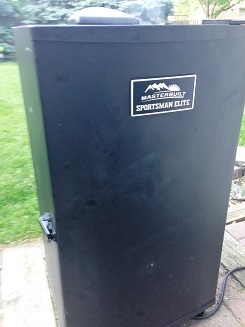 On sale at Cabela's last winter, it turned out to cost about the same as my previous starter unit at that "Save Big Money" home improvement store, but with a bunch of upgraded features. For starters, the smoker door latches; last year, the old smoker needed to have the door held shut with a 2x6 leaned against the door. (Biggest sign that it was time to send that thing out to retirement.) It's electric with an electronic thermostat; it's much more precise with the temperature than the older unit. However, the digital readout isn't very bright and is very difficult to read in the sunshine. I usually have to shield the unit to read it. It also has an integrated temperature probe, which allows you to continuously monitor the temperature of the meat without opening the door. (I've had mixed success with those probes with a wire; the units that transmit via radio waves never seem to work, and all of the corded ones tend to fail quickly when being passed through a hot door opening.)

I also like the ability to add wood chips to the burner box without having to open the door, though that also poses a bit of a conundrum. That design that makes it easy to reload also makes it very difficult to check the box, so the only gauge you really have is the amount of smoke being produced. I figure that it'll be one of those things that will take time to master the art of. (Much like smoking itself.)

My best success with smoking has been with leaner roasts; briskets have been hit or miss, and I'm not much into ribs. Smoked pork loin has been my "go-to" over the years; it's cheap (when found on sale), lean and smokes really fast. With an active family, it can be difficult to find eight to nine hours to properly do a brisket, but a 2-3 hour slot for a loin or beef roast is pretty manageable.

Which was my latest foray into smoking. When the heat wave hit last month, we decided that with high temperatures in the mid-90's, a pork loin would provide us with plenty of leftovers without having to turn on the oven. I started with a 9 lb loin cut in half; smoked one half and put the other half in the freezer. The rub was a combination of two Fiorella's rubs from Jack Stack Barbeque in Kansas City. For wood, I used apple chips, which have been my favorite, and for the water pan, I experimented with a Shock Top Grapefruit Shandy. (We figured that the sweeter tone of the beer would pair well with the sweeter wood.)

And about 2 ½ hours later, it was done after smoking at 225. Pork loin is one of those meats that smokes well, but you have to make sure you pull it when it gets done as it can dry out very quickly - especially if you don't have a moist heat. Sometimes, I'll add an extra pan of water to the smoker to ensure that it's a moist heat - especially in winter time.

Next up? Sometime in the next month or so, I've got a beef sirloin roast and a New York Strip waiting in the freezer for a lazy Sunday afternoon...which may take a few weeks with all of the summer activities coming up. Did I say "New York Strip"? Yep. That was one of my finest creations. Buy a whole strip from a good butcher shop, and instead of having them cut it into steaks, have them cut it into 4 or 5 pound roasts.