Share All sharing options for: What Will Nebraska's Win Total Be In 2015?

That’s it. That’s the question - What Will Nebraska’s Win Total Be In 2015? Discuss!

Mister Mike: I happen to "buy in" to what Dave Bartoo (cfbmatrix.com) has to say about the Huskers’ record this year.  He predicts a record of 9-3 as the most likely, with 10-2, 8-4, and 11-1 coming in second, third, and fourth respectively.

Paul Dalen: My early model runs predict 9-3 as the most likely with a probability of about 67%, with 10-2 and 8-4 almost tied for second at about 12% each.  The individual game probabilities (most likely scenario) are below.  I believe that NU will lose to MSU and Wisconsin, and the Miami and Minnesota games will be the difference between 8-4 and 10-2. 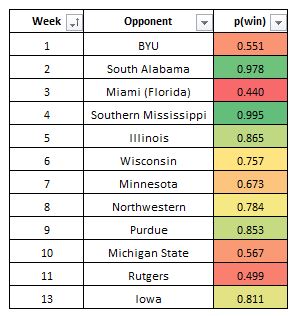 Husker Mike: I’m leaning towards 7-5 at this point in time. BYU and Miami look like tough matchups in the non-conference schedule. The opener against BYU looks like it could be a three-touchdown game either way, depending on how well Taysom Hill is recovered and whether Nebraska can fill the Ameer Abdullah void. Miami’s heat (and the void at I-back) bothers me as well, and we know that Wisconsin and Minnesota have had Nebraska’s number as of late.

The good news is that it doesn’t take much of a stretch to believe Nebraska can win four of those five games I’m leaning towards losing.  Heck, IFFFFF Alonzo Moore reels in that late pass against Michigan State, ANNNNND De’Mornay Pierson-El doesn’t fumble against Minnesota, ANNNNNNNNNND a monsoon floods Camp Randall Stadium midway through the second quarter, Nebraska could have headed to Indianapolis undefeated last season.  So optimists, yes 10-2 or 11-1 is certainly possible, if you really believe in Mike Riley.

Ranchbabe: I tend to go with the 9-3 crowd. I expect to see a better-prepared team than in the past but I also see a team adjusting to a very different offense and defense. I am assuming we will see some glaring personnel deficiency somewhere as this staff is still recruiting to their type of roster (Looking at you LB’s…prove me wrong).

I also see issues at QB. Tommy Armstrong is one tough kid and receives nothing but rave reviews for his leadership and work ethic. However, it is hard to ignore the questionable passing accuracy. Can Riley and offensive coordinator Danny Langsdorf improve those mechanics and can Mike Cavanaugh build an OL that actually gives TA2 time to do something besides "chuck it and duck"? I think Tommy can make big strides if he gets protection and the run game keeps opposing defenses guessing, but he is not the prototypical Riley quarterback and we still aren’t sure who the next great Nebraska running back will be.

When I first started this answer, I really wanted to go with 10 or 11 wins because of all the warm fuzzy feelings Riley has created so far. After I counted the number of things that need to go right, I started to lean toward less than 9 wins. However, I do not want to live in a world where Nebraska fires another 9-win coach and then proceeds to lose more games. I’m sticking with 9 regular season wins + a toss-up 10th in an upper-middle class bowl.. The schedule is incredibly favorable and that might be enough. Crossing my fingers.

Pat Janssen: I like being "creative" and "different," but I have to side with the majority here. It’s looking like 9-3 is the realest possibility. Considering how desperate we as a fanbase are to escape the drudgery of that record, that would normally be a bad thing. But with this many toss-ups and, you know, the whole coaching change, I feel like that would scream "upward trajectory." And truthfully, even though that might be a bit of an optimistic number, to maintain a lot of the good vibes currently surrounding this program and the coaching staff, that might need to be the number Riley and crew hit. Because Lord knows the vultures will be out in full force if the guy hired to get Nebraska over the nine-win hurdle doesn’t hit that mark this season. It’s completely unfair, considering the philosophical changes and recruiting gains that will undoubtedly leave a positive effect on the future, but it’s the baseline for the Riley doubters.

There are a number of early games that could really affect this number. If Nebraska loses early to both BYU and Miami (and looks bad doing so), the doubt that will be swirling over this season could threaten to derail the whole thing. If Nebraska survives those two games and then steals one from a Wisconsin squad with some coaching uncertainty of its own, the Huskers could conceivably find themselves undefeated going into the Michigan State game. Suddenly momentum is doing something completely different. This is the most wide open I’ve seen predictions for a Nebraska season in a while, so it only makes sense to predict the exact same season that’s been happening every year for the last seven years.

Keith: Busy watching Sunday Night Baseball, don’t we have to get through the Little League World Series before it is football season? Okay, I will actually answer the question. Nebraska probably goes 10-2 against the upcoming schedule.

Rationale behind the 10-2 prediction is that BYU will probably suspended a quarter of their team with the rest of them going on a mission so we can chalk that up as a win. Taysom Hill is more fragile than my 79 year old grandmother. Run over a couple of cream puffs in Southern Mississippi and Southern Alabama then comes a showdown with Miami which Miami fans don’t even show up to, so Nebraska wins another home game.

Illinois still can not stop the run, then comes Wisconsin. Chalk that up as a loss. Close loss but a loss. Nebraska will still not be able to stop the run, and protect against a blitz. So still 5-1 and ranked. Nebraska gets mad and then rattles off three in a row to come including a win against Minnesota.

Now comes a huge November night showdown with Michigan State. In a driving snow, MSU runs it down the throat and Armstrong still can’t figure out that Ed Davis. Nebraska rebounds and wins the last two games, including a snoozer against Iowa who goes 4-8 en route Ferentz getting fired. The season ends in some mediocre bowl.

Ty: Sigh.  I don’t know.  When the previous regime was sent on their way, I thought there was no way we’d get a quality coaching staff, so I didn’t think we’d get to 7 wins next season.  With the recruiting we’ve seen, and with what the players *seem* to be saying, I think there’s reason for optimism.  Having not really seen the package on the field, however, how can we possibly know?

I don’t want to join the 9-3 club, and thank goodness my instinct will allow me not to, but not to the good.  I think the team finishes 8-4.  Miami’s a big-time wild card game.

Ah hell.  Actually, the more I think about it, I have us at 10-2.  I can’t talk myself into losing to BYU.  I do kind of think that Michigan State is still too stout, but I’m seeing us beating Wiscy here and that momentum COULD build into a win over MSU.  A second loss could easily come from so many places.  Minnesota has our number, the non-conference is a total crapshoot (see Miami comment) and remember how we played when coaches’ jobs were on the line last year?  Why couldn’t Iowa do that?

Brian Towle: The baseline is 8 wins, plus a bowl win for this team, right? I mean, this was a 10 win team last year BUTTTTTTTTTTT Alonzo Moore didn’t catch a ball AAAAAAAAAAAAAAND McNeese State missed an alignment AAAAAAAAAAAAAAAAAAAAAAAND Wisconsin kept scoring on the same 3 plays AAAAAAAAAAAAAAAAAAAAAAAAAAAAAAND USC kept exploiting Ross Els great coaching. So, you think that coaching could help out with Minnesota, which has their best chance to win the West, and if you think Nebraska has improved enough to win that, there’s one. Also, we have no identity on Wisconsin yet, and Michigan State does come to town. BYU will be a feeling out game for both teams, and Miami could be the one that Nebraska looks shaky at, even though the Canes underachieve badly. Plus, who says there won’t be more Red than Green/Orange in the stands?

Nine wins, which seems anti-climatic but in the end, should be what we measure Mike Riley cause Bo Pelini had lesser assistants yet got there, am I getting this right?

Jon: The consensus seems to be nine wins - how could it be anything else?

I can see us losing to BYU because of early transition problems on both offense and defense. Miami - I’m not sold on Al Golden being able to pull that program together. Both of those could be losses, leaving Nebraska at 1-2 early. Husker fans pull the freak out and start questioning the hire and pulling out the "true fan" card because that’s what we do to each other when expectations aren’t met.

Wisconsin, toss up. Minnesota, toss up. Michigan State, loss. I’d guess I’d be leaning towards 8-4 more than 9-3, just because that’s what it feels like to me.

Everything about this coaching staff looks and sounds good. They’ve said and done all the right things. Despite that, Mike Riley’s losses at Oregon State to FCS teams sticks out to me as something of a quandary, that there’s going to be that one game a season we lose that we have no business losing.

That’s the long term. In the short term, remember that we’re in a transition year. The start could be rough. Keep the faith, as always.