With the last home game in almost a month, the Huskers get to work on some targets this weekend. Plus, lets see what has come from the past couple of weeks of Official Visits.

Share All sharing options for: Recruting: LSU Target Visiting For Illinois, Plus Updates From Last Week

Well, you can't say that the Nebraska Cornhuskers aren't trying to get some bigger names into Lincoln to finish off their 2015 cycle well. With about 4-6 spots left for the cycle, the Huskers are trying to get some home runs into town to complete the recruiting cycle.

While last week's list was actually bigger than we first advertised, this weekend's is smaller but just as important. A LSU target at Wideout heads the list. Of course, we throw the caveat that these are scheduled, and this list is going to change somehow, someway.

2015 Official Visitors not committed to Nebraska:

Stanley Morgan: This 4 star Wideout from St. Augustine HS in New Orleans is going to make a visit Saturday night. With a pretty decent offer list, it's a race that Rich Fisher and Charlton Warren could win easily. That being said, if and when LSU offers, it would be academic that the Tigers get the commitment. Morgan comes from the same HS as Leonard Fournette, so Les Miles knows what's going on there.

Dedrick Young: This Linebacker recruit from Peoria, Arizona, Young should be a Husker when it's all said and done. Washington is the main competition here, and the Huskers get the second visit after Washington got one 2 weeks ago (ironically, that was against Illinois too).

- Jaason Lewis, who the Huskers hosted as the lone visitor back on September 6th vs. McNeese State, pulled the trigger for Arizona State yesterday. It seemed that while Lewis loved the facilities in Lincoln, he expressed the way Todd Graham's staff will use him. That seemed to be the winner here.

- One name to definitely watch for a commitment from last weekend's visits is from Reuben Jones. The Defensive End from Lakeland, Florida loved his visit and a lot of folks think he never gets to West Virginia to visit. 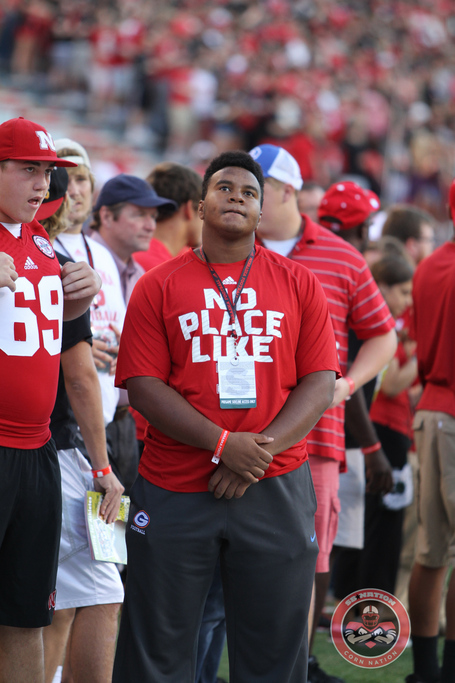 - Jackson Perry (above) is another name to watch for. Appearing on the sidelines last weekend, it's down to Nebraska and a handful of Ivy League schools on this one. UCLA or Stanford could try to get in there at the end, but with the work that was put in when Nick Gates in the Nebraska jersey above) came from Bishop Gorman last year, there's a lot for other schools to overcome. You can see Perry & Gorman vs. St. John Bosco on ESPN tonight at 8pm.

- One visitor that would have made big news but fizzled out was Christian Bell, the Hoover, AL DE/LB that is committed to the Crimson Tide. The thought came that he may visit on Tuesday, but it just didn't happen.

Of course, if and when any commitments hit the deck, we here at Corn Nation will be there for you.