Three years ago, CN assisted with a campaign to raise money for the Make-A-Wish Foundation of Nebraska. That campaign centered around Nebraska joining the Big Ten Conference.

This week a new campaign starts that is tied in with the upcoming historic homecoming game against Illinois on Sept. 27 that will also salute the 125th anniversary of football at Nebraska.

To honor that, and to also raise funds for which raises money for youngsters who have life-threatening medical conditions, Nikco Sports has created a limited edition Cornhuskers football to celebrate 125 years of Nebraska football.

Only 2,014 of these special, 125th anniversary Nebraska footballs will be produced to raise funds for the Make-A-Wish Foundation of Nebraska. Each is priced at $99 and includes a handsome acrylic display case along with a numbered certificate of authenticity.

For each football sold, $7.50 will be donated to the Make-A-Wish Foundation of Nebraska.

Several of the panels have all sorts of historic info on the Cornhuskers, plus there is one panel that has a beautiful panoramic color photo of Nebraska's football stadium that stretches the entire length of that panel. The three panels are shown below.

Everything is officially licensed and comes with a numbered certificate of authenticity. 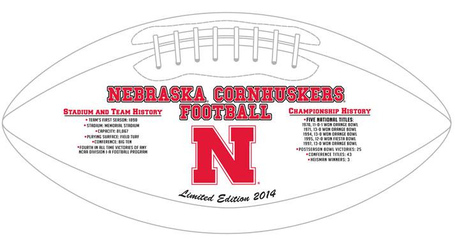 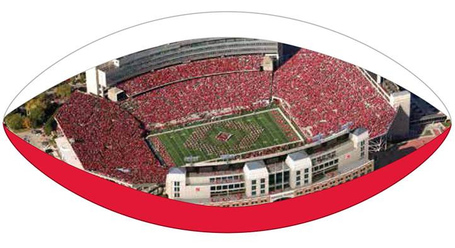 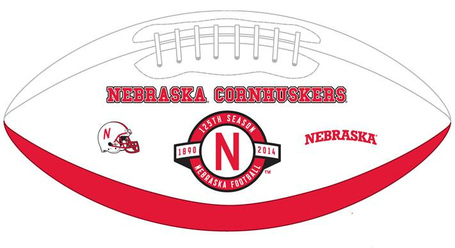 The 2014 B1G Power Poll Week 4: The Farm Animals Edition - Off Tackle Empire
Because nothing says B1G like farm animals.

2014 Iowa at Purdue: Preview - Hammer and Rails
Our Most Hated Rival is coming for Homecoming and Purdue might be able to actually win a Big Ten game.

YOUR STILL-WAY-TOO-EARLY BIG TEN POWER RANKINGS: POST-WEEK 4 - Black Heart Gold Pants
Ann Arbor may be up in flames after this weekend, but week 4 was a bounce back for the Big Ten.

The NCAA says attendance is up at college football games, but that isn't true across the board. The B1G big boys still pack'em in (pretty much), but there are places where they might be paying you to show up.

Big Ten Coaches Power Rankings: Week 5 - Maize n Brew
Voted on by SBNation writers, these power rankings answer an age old question once and for this week only: Who is the best coach in the Big Ten?

Upon Further Review 2014: Defense vs Utah | mgoblog
FORMATION NOTES: Not much of note. M was in a 4-3 over most of the day with few deviations. Miami did do some of that late-model RR/Baylor stuff by putting their WRs way far away from everything. I called this Shotgun 4-wide far.

Snapshots of Doom: Michigan's Cavalcade of Mistakes Against Utah - Maize n Brew
A quick look at the myriad of mistakes Michigan made against Utah in the loss last weekend.

Wisconsin LB D'Cota Dixon out for season after shoulder surgery - Bucky's 5th Quarter
The freshman linebacker appeared in three games, but will miss the remainder of the season.

Wisconsin football schedule: Getting to know South Florida - Bucky's 5th Quarter
Before the Badgers face South Florida at Camp Randall Stadium on Saturday, here are a few things to know about the Bulls.

This Week In Schadenfreude: Beyoncé, arson, and clownfraud tigers - SBNation.com
And rum. It's time for the weekly trawl through the internet's most unhinged quarters this past college football weekend.

The Acrostical, Week 4: Just go outside - SBNation.com
"El Tractorcito" is the country's finest nickname, Indiana takes on all the rights and responsibilities that come with being the SEC East's best team, and the Week 5 schedule sets up for us all to get a little exercise.

Nebraska's #FearAmeer campaign gets a boost from the band - ESPN
The red-hot start to the season by Cornhuskers running back Ameer Abdullah will get a shout-out from the school's marching band Saturday.

Study Hall: Nebraska 41, Miami 31 - Football Study Hall
Ameer Abdullah was amazing, but Nebraska needed turnovers to pull/stay ahead in this one. Miami averaged a healthy 5.2 yards per scoring opportunity but still managed to turn the ball over three times in Nebraska territory.

Catching Up with Kody Spano | Hail Varsity
What's former Nebraska quarterback Kody Spano up to today? We went and found out.

Tale of the Tape: Miami | Hail Varsity
Breaking down key plays from the Huskers win over Miami.