Should Abdullah be considered among the greatest Husker running backs?

Abdullah may finish the season as Nebraska's all-time leading rusher, but is he in the group with Rozier, Phillips, and Green?

Share All sharing options for: Should Abdullah be considered among the greatest Husker running backs?

Another day, another great question from Unsportsmanlike Conduct that is worthy of some in-depth research.

Where does Ameer Abdullah rank among the "tiers" of Nebraska I-Backs? #Huskers http://t.co/G7RxqULuZs

Answering this question objectively is difficult.  Rozier, Phillips, Green, and Abdullah all had different careers.  While Phillips and Green played at the same time, Rozier preceded them by more than a decade and Abdullah follows almost two decades.  They participated in different numbers of plays.  Rozier, Green, and Phillips had the benefit of lining up behind some of the greatest offensive lines in college football history and next to some of the greatest college quarterbacks of all time.

So how do we compare apples to oranges?  Easy, we compare fruit to fruit.

This is number of games that each played in and the number of plays participated in (PPI).  For Abdullah, I assumed 13 games and estimated his number plays based on the average plays per game now * 13.

The comparison factor, which I will use to adjust statistics, is the statistic / ave. of the four.  The result is that Phillips, who really only played 2 1/2 seasons, will have his raw stat numbers adjusted upwards to make a more direct comparison to Abdullah, who has played in more games and participated in far more plays that the others. Abdullah's career numbers will be decremented a bit.  In the end, the results can be assumed to be based on a notional, but equal, number of games and PPIs. 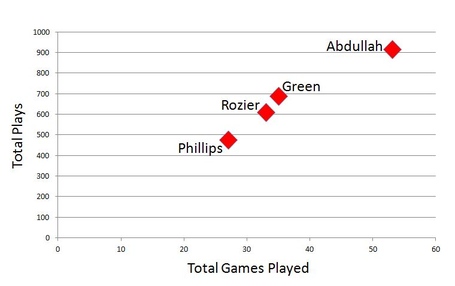 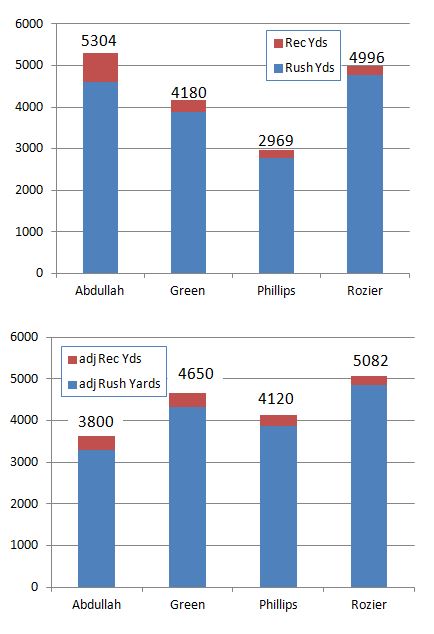 To estimate Abdullah's total yards, I used his current per game average * .80 (to adjust for a tougher schedule going forward) * 13 games.

If that estimate is valid, Abdullah will finish his career as the best of the four for total rushing and receiving yards.  For receiving, he already has a significant lead, and will continue to increase his lead on the others.  However, when we adjust for games and PPI, his adjusted total puts him in 4th position by a fairly large margin. 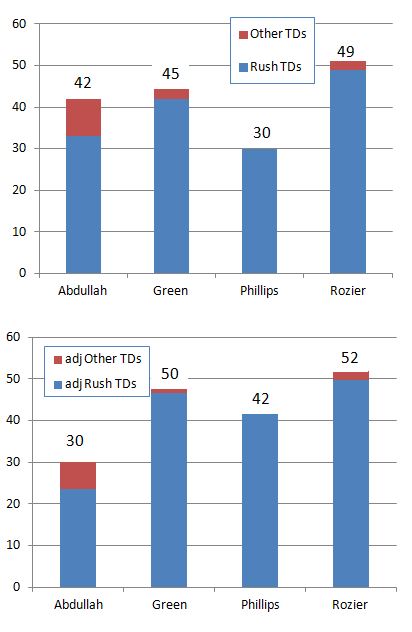 Efficiency (Yards per Carry, Yards per Reception, and Yards per Touch) 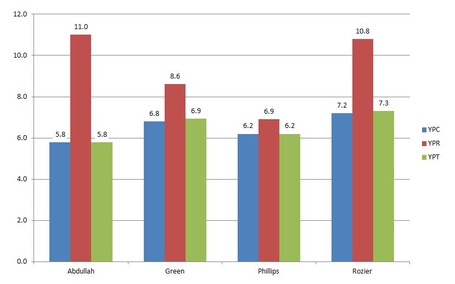 We don't need to adjust efficiency statistics.  By this measure, Abdullah is well behind the other three.  His receiving efficiency is slightly ahead of Rozier's, and because he will have more than 3x as many receptions as Rozier, Abdullah should get the nod as the best here.  Abdullah's yards per touch (includes all rush and receptions) is  below the other three as well.

So, what do we make of these numbers?

If we look at raw numbers, Abdullah is deserving of being considered among the all-time best at Nebraska.  He passed Johnny Rodgers to become the all-time leader in all-purpose yards last Saturday.  He is on pace to pass Rozier as the all-time rushing leader at Nebraska...a feat that alone is worth considerable weight in this discussion.

But I also think that if we are going to be as objective as possible in answer this question, we have to use some sort of adjustment factor to compare statistics.  When we do that, it's obvious that a fairly large gap between Rozier, Green, and Phillips remains.  And while we're at it, perhaps we need to ask whether Phillips deserves to be in the group with Green and Rozier.

Perhaps the grouping should be:

Tier 1A - Rozier and Green

Tier 1B - Phillips and Abdullah

What do you think?