Nebraska. Miami. The memories of numerous agonizing losses, but also one cathartic night of ecstasy. All held on an allegedly "neutral" field...which also doubled as Miami's home field. But this time was different.

It was in Lincoln.  Our house.

And when Thug U emerged in the second half with extracurriculars targeting Randy Gregory, the scene turned ugly.  Fans booed, and even serenaded the Hurricanes with a rendition of "Na na na na, hey hey hey, Goodbye!" that would have made any high schooler proud.

Was it childish? Probably.  Was it what Nebraska fans are known for? Nope.  But what it was was cathartic. For one night, the pain of past Orange Bowls was finally able to be redirected back at the U.  Neither football program is at the same level they were 20 and 30 years ago, but the opportunity to get Miami in Lincoln is one that won't happen again for a long time. And when you get an opportunity, you have to take it.

Ameer Abdullah was special on this night. Maybe Miami is that awful at tackling, but it probably was more Abdullah simply refusing to be tackled. It was almost like that last play against McNeese State all over again. Bouncing off of tacklers, and somehow regaining his balance. I don't know if anybody tracked yards after contact, but probably over half of Abdullah's 229 yards would have fallen into that category.

So it became one of those games where Nebraska outscored their opponent.  That's good enough for this week to get the team to 4-0.  Might not be enough in two weeks, though.  But let's not worry about that for now.  Here's this week's report card, and like always, your comments are not only welcome, they are encouraged.  Let us know what you agree or disagree with!

QB: Set aside a couple of turnovers, it was Tommy Armstrong's best game ever as a Husker. The fumble was probably more a great defensive play by Miami safety Deon Bush; the interception was either an underthrow or a miscommunication between Jordan Westerkamp and Armstrong. But even so, Armstrong completed 69% of his passes and rushed for 96 yards.  That's deadly because it forced Miami to play Abdullah straight up.  I wanted to give him an A, but can't do it with the turnovers.  Grade:  B+

I-Back: Wow. What a game for the Heisman candidate. Assuredly, he'll be Big Ten offensive player of the week and probably get a couple of other national mentions as well on Monday.  What was big to me was that he did all of this without breaking a long run; all night long it was Abdullah turning a 3 yard run into a 10 or 15 yard gain by bouncing off of Miami tacklers. Sure he had some help from his teammates, but Abdullah ran like a man possessed. Frankly, it was one of the most impressive performances by a Nebraska I-back that I can remember.  An A+ isn't enough; this grade is a perfect 100%.

WR: Kenny Bell opened the game with a beautiful catch and added three more.  Alonzo Moore also had a great catch at the start of the third quarter when Nebraska seized control of the game. The bigger deal was the downfield blocking for Abdullah, which wasn't always easy to do because you never were where Abdullah was going to bounce each run next.  Grade:  B+

OL: When you gouge the #15 run defense for 343 yards (over four times their average), you know the offensive line was playing well. Problem is, they could have played even better as the line had two false start penalties and three holding calls. (Alex Lewis, we're shaking our heads here...)  So once again, no A.  Grade: B+

DL: Wow, this is where the game got ugly. All night long, Miami paid special attention to Randy Gregory, holding him on the ground and being chippy in order to frustrate the all-American...and get him to react.  Still racked up seven tackles, two for loss, a forced fumble on the errant backwards pass, and two quarterback hurries. Decide for yourself if that was a successful strategy.  Vincent Valentine had six tackles but the controversial play of the day on the roughing the passer penalty. I finally found a replay via the ACC Digital Network, and realized that it wasn't after the interception, as some said yesterday.  Was it low?  You decide: 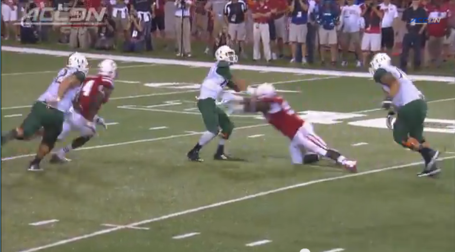 Here Valentine disengages from his blocker, but starts going down before making contact with Miami QB Brad Kaaya. 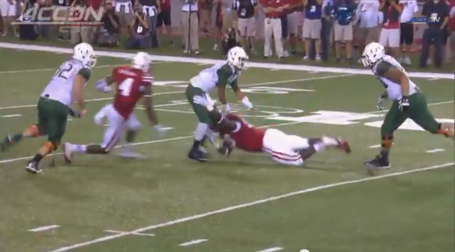 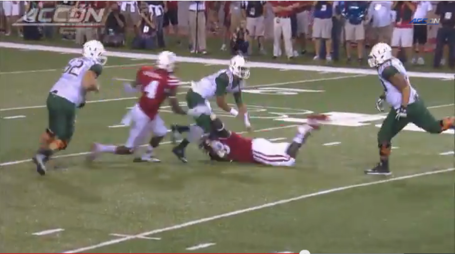 And once Valentine is down, he's making contact below the knee, which is now illegal. At the speed of the play, you can see how the official viewed the hit as aimed at the knees or below.  Sad to say, this probably was the correct call.

Overall, I'm giving the line a B- for the night.

LB: Josh Banderas had a rough night, with multiple missed tackles and a bad face mask penalty.  In came Trevor Roach, who didn't play much better until late in the third quarter, when he forced Duke Johnson to fumble the ball, which Josh Mitchell scooped up for a touchdown.  I suspect that Roach could get the start next week against Illinois. Last week's goat became this week's hero:  David Santos led the Huskers with 10 tackles and an early interception to thwart a Miami scoring threat.  Santos' heroics boost this grade to a C.

Secondary: I thought the secondary did a decent job of covering the Miami receivers, but nobody could cover tight end Clive Walford.  Too fast for the linebackers (who were usually on the bench) and too big for the defensive backs. Teams with tight ends certainly will take notice, though most don't have tight ends as talented as Walford. Grade: B.

Special Teams: Nice to only have to punt once.  Drew Brown was pretty good taking over for injured kickoff specialist Mauro Bondi, who's out for a while with a broken collarbone suffered in a motorcycle crash.  He probably shouldn't count on a friendly doink off the goal post in the future.  And he'll learn from that kickoff out of bounds; he is, after all, a true freshman and kickoffs probably weren't something he was focusing much on until Friday.  Grade: B

Coaching: For resisting the temptation to throw the ball more, Tim Beck deserves special kudos.  Masterful offensive game plan.  Defensively it was a little rocky as Miami tried to outscheme Pelini by waiting until the last possible moment to run their offense onto the field at the start of a drive. The problem for Miami was that sometimes they didn't allow themselves any time to snap the ball, resulting in delay of game penalties to start drives.  More importantly, Pelini got his defense settled down at the end of the third quarter after the scrum and the roughing the passer penalty, forcing a field goal after Miami had reached the Nebraska 6 yard line  Grade: B

Overall:  B+ Solid win that sends Nebraska into conference play undefeated. Sadly, the pollsters don't think much of the win, but it doesn't matter.  Just keep winning.

B1G:  A  After taking it on the chin the last two weeks, the Big Ten redeemed itself in non-conference play. Only Michigan failed to live up to their end of the bargain.  Brady Hoke is starting to swirl the drain at the Big House.

LSU:  F Just because the rope-a-dope worked against Wisconsin doesn't mean that it'll work on anybody else.

Illinois:  D  If you are still hyping Wes Lunt, please stop embarrassing yourself. Fourth quarter comebacks against Youngstown State, Western Kentucky, and Texas State shouldn't be necessary when your quarterback is playing well. Really, the question is who gets fired first: Tim Beckman, Brady Hoke, or Darrell Hazell.