The first NCAA berth in over 5 years came to a end for Nebraska Baseball in a fashion to frustrate folks for many days to come.

He who fears not the death of a thousand cuts will dare to unhorse the emperor. — Chinese proverb

In their final game of the season on Sunday, Nebraska Baseball happened to be undone by the things they didn't do on the way to the NCAA Tournament. Unearned runs, errors, a balk and failed hits with runners in scoring position ended up being the difference as Nebraska lost once again to Cal State Fullerton 4-3 in a elimination game at the Stillwater Regional.

Nebraska (41-21 overall) seemed to fight from behind all weekend, even against Binghamton yesterday as they took the lead in the 9th inning. However, the way that today's game went about showed both how the Huskers had fought back all year, but then spent all weekend trying to get out of their own way. 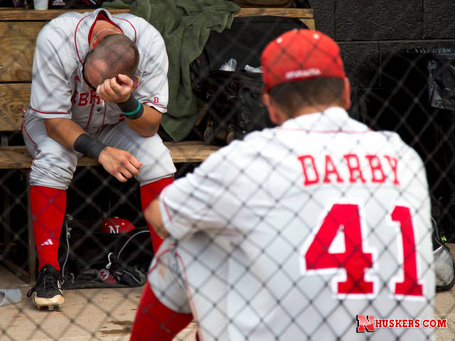 Fullerton (34-23) got on the board first in the bottom of the 1st with a Tyler Steib single, followed by an error by Nebraska starter Aaron Bummer on a Keegan Dale sacrifice bunt. JD Davis, who was a big thorn in Nebraska's side all day, singled to load up the bases with no outs. Bummer got the next 2 Titans in order, but a Clay Williamson single to left scored Steib and Dale to give the Titans the early 2-0 lead.

Nebraska started their march back into the game in the fourth inning, as Ryan Boldt doubled to right-center field. After a Steven Reveles sacrifice bunt to move Boldt to third, Michael Pritchard flied out to left to score Boldt. Pat Kelly singled, but Blake Headley ended the threat with a groundout to keep it 2-1 CSF.

Nebraska took the lead in the 6th inning when, with one out, Reveles and Pritchard had back to back singles. Reveles scored on a wild pitch by Fullerton starter Grahamm Wiest, and Pritchard moved to third. Pat Kelly hit a ball to Matt Chapman, who came home and got Pritchard out on a Fielders Choice. However, Pat Kelly did advance to second on the throw. Kelly came home on a Headley single, giving the Huskers a 3-2 lead.

Fullerton took the lead for good in the seventh inning. Bummer started the inning by hitting Jared Deacon with his first pitch, and then Bummer committed his second error of the day fielding a sacrifice bunt by Taylor Bryant. With another sacrifice bunt by Stieb, the game was tied with a Steven Reveles error on a Dale grounder to short. Bob Greco came on to pitch, but was called for a balk with runners on the corners. Both runners were allowed to move up 90 feet, therefore allowing Bryant to cross home.

Grahamm Wiest went 8 innings and gave up 3 runs on 7 hits with 5 strikeouts for the win. JD Davis took the mound in the ninth and allowed both a hit and a hit batsman to get runners in scoring position, but Jake Placzek lined out to Bryant at second to end the game and the Huskers season.

Bummer takes the loss, allowing 4 runs (none earned) on 5 hits with 2 walks and 4 strikeouts in 6 1/3 innings pitched.

Cal State Fullerton will take on Oklahoma State tonight at 7pm. If the Cowboys win, they advance to the Super Regional, where they will take on the winner out of the Corvallis Regional. If Fullerton wins, they will force a Game 7 on Monday. 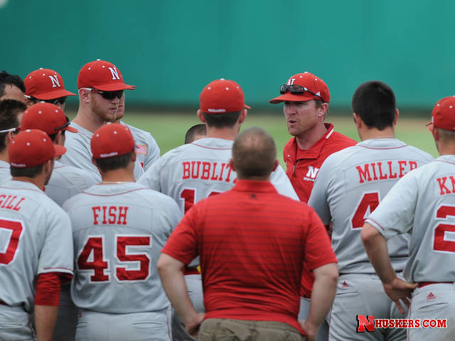 "First of all, Bob Greco's balk is on me. We wanted him to step off so we could change the first and third defense, and we probably called for it a bit too late. That's on me. We have a guy hurting over there and it's not on him, it's on me. As far as our team, what can I say? They fought their tails off again. It didn't look so promising in the beginning. I'm proud of Aaron [Bummer] for weathering the storm and giving us a chance to win. We fought back, it just wasn't enough. I'm proud of our boys for grinding it out--we just didn't play well enough today."

On the defensive struggles

"There needs to be better coaching. I need to do a better job with them, first and foremost. It's unfortunate, because we played so well defensively pretty much all year. I guess you get into these types of situations and little mistakes get exposed much more against quality opponents. Again, it's on me to get them better, and that's what we're going to do."

On replacing some of the senior leaders

"When you bring a new coaching staff, you have to earn the trust of your players. They have to buy in to what you're doing. Once that happens, the effect trickles down and the next wave buys in. I think our older guys have done a great job grasping what is expected from them and how we handle our business. The turnover is inevitable. Guys run out of eligibility--that's just the way it is. We are fortunate to have a group of older guys, who I think have instilled the type of mentality we want to have here, going forward."

"That was a gutsy performance by both pitchers. I thought Grahamm gave us every bit of energy he had, going all the way to the ninth inning. I thought their guy, Bummer, started off shaky as we all saw. We got a scratch hit in there with our big boy going up and popping up. We itched it away. They kind of scratched and clawed to get back into it. The balk was obviously a big play. It was 100 percent a balk. He flinched as he came up. It was fortunate for us."

"We don't score a lot of runs. Grahamm is 5-4 with a 1.55 ERA so that should tell you that when he pitches, we don't score very many runs. That's a pretty good ERA, and going into today, he was 4-4. He's stayed straight ahead every time and is 3-0 in the postseason. I'm pretty sure he's won every game he's pitched for in the last three years of postseason." 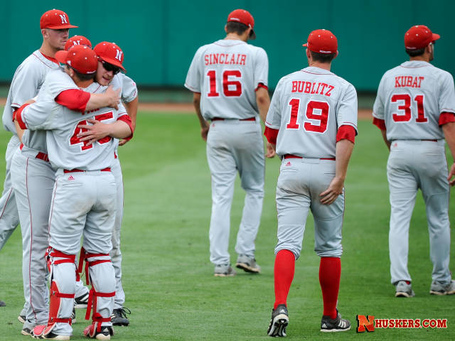 A great season has come to an end for Nebraska Cornhusker Baseball. 41 wins, a NCAA Tourney berth, and massive crowds at both Haymarket Park and TD Ameritrade Park for the B1G Tournament proves that a lot of people care a lot about these guys. The season was a success, no matter what happened this weekend.

You see, you spend a good piece of your life gripping a baseball, and in the end it turns out that it was the other way around all the time. ~Jim Bouton, Ball Four, 1970