You Have $15 To Create Your All-Time Huskers Offense - Who Ya Got?

Let's play the Nebraska football version of the $15 Starting Lineup Fantasy Game that's taken the sports world by storm this past week. You get $15 to pick your team consisting of Nebraska's all-time greats on the offensive side of the ball.

Share All sharing options for: You Have $15 To Create Your All-Time Huskers Offense - Who Ya Got?

If you've spent any amount of time on Twitter or any of the various SB Nation comment sections, you would have surely come across Ballislife.com's genius "NBA All-Time Starting Lineup Fantasy Game".

The premise of the game is simple: You get $15 to pick your starting five. Each position has five players available, and each player is worth a different dollar amount. Players have been valued from $1 to $5. For instance, Michael Jordan is the $5 shooting guard, whereas Dwyane Wade is the $1 shooting guard.

Now we can't do a starting five for Nebraska football, but we can assemble a set of skill position players and rank them from $5 down to a buck. I didn't spend a great amount of time ranking each position, but based on articles like this and from my own memory I think I'm at least in the ballpark with how these players would be ranked.

Based on the rankings below, who would be on your all-time Huskers offense? Remember, you can only spend $15 to assemble your team. 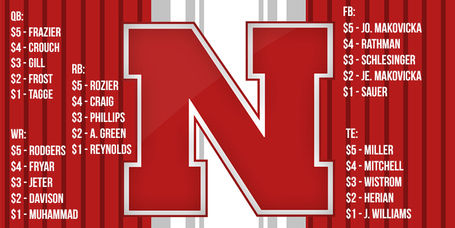