No one in Nebraska is surprised by this.

The 2014 Big Ten Baseball Tournament rolls on as Minnesota and Ohio State were eliminated yesterday. I was surprised that Iowa knocked off Minnesota, but Ohio State's loss....not so much. Their season never materialized into the season they wanted, and I have to believe they just wanted to get it over with.

This baseball team constantly refers to themselves as "the boys".

The boys will play at 9:00 am Saturday (yuck) against the winner of this evening's game between Iowa and Michigan.

Nebraska Advances To Big Ten Baseball Semifinals with 3-2 Victory over Michigan State - Corn Nation
Nebraska is just one win away from the Big Ten Baseball Championship game after another thrilling victory over a record crowd at Omaha's TD Ameritrade Park! Will you be there bright and early at 9 am Saturday morning? 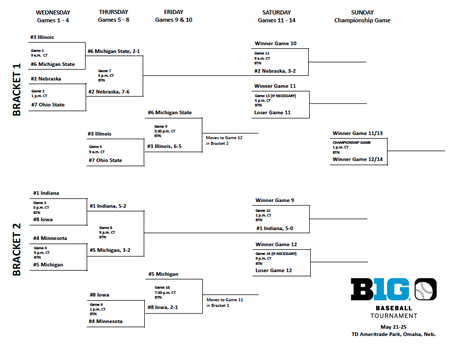 The Husker women's softball team was not so fortunate, losing to #2 Alabama. They had a solid lead, but errors cost them the game. They will now need to beat Alabama twice in order to advance.

A recent Football Writers Association of America (FWAA) announcement that Nebraska was again one of the nation’s “Super 11” sports information departments serving football was hardly a surprise.

From things I've heard around our network about other athletic departments, Nebraska is pretty darned good. They have their crap together, do things right.

Beyond the bagman: Podcast on Ohio State and the NCAA with Steven Godfrey - Land-Grant Holy Land
We chat with SB Nation reporter Steven Godfrey on the fallout from his epic tale of bagmen, future scheduling across the country, the Cincinnati game, and more.

The big 2014 Northwestern football preview: How big is the bounce back? - SBNation.com
It's been a strange 12 months for Northwestern, from injuries and tight losses on the field to union drama off of it. Pat Fitzgerald's experienced Wildcats will almost certainly recover this fall, but is the magic of 2012 gone?

The big 2014 Rutgers football preview: Potential vs. production for Big Ten rookie - SBNation.com
Rutgers was young, explosive, and all sorts of erratic in 2013. The Scarlet Knights move to the Big Ten with more experience, serious athletic potential ... and plenty of reason to doubt that potential turns into consistent production.

Why Landon Donovan's legacy couldn't carry him to the World Cup - SBNation.com
The greatest American soccer player ever isn't going to Brazil, and it's because he didn't earn his place.

OH MY DEAR GOD WHAT HAVE YOU DONE AMES IOWA?

Notice all of the people they profile in this look like they're about to eat a turd?