First day complete at the 2014 Big Ten Baseball Tournament in Omaha, with Michigan State, Nebraska, Indiana, and Michigan coming away as winners. 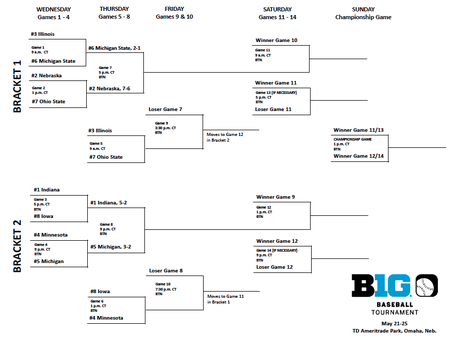 Ohio State suffered their fourth one-run loss to Nebraska, their third-consecutive walk-off loss to the Huskers putting their season on the brink in the process.

"The ninth inning, again, got away from us against Nebraska," Beals said. "We've played Nebraska for now 36 innings and we've beaten them for 32 of those 36 innings and are now 0-4."

Life of a Skipper - The Crimson Quarry

Tracy Smith, the 2013 NCBWA Coach of the Year and manager for the #TeamOfTheNorth, has taken Hoosier baseball to heights unseen, and has his squad in position to do even more this season.

Baseball is no longer an afterthought in Big Ten
OMAHA, Neb. (AP) — Long the Big Ten's forgotten sport, baseball is making a comeback in the conference. The most visible sign of progress: Indiana last year became the first Big Ten member since 1984 to play in the College World Series. Aided by the infusion of cash from the Big Ten Network, five schools have opened new stadiums the past seven years.

Attendance for Day 1 of the #B1GBaseball Tournament, 10,424. That is a single-day tournament record. Thank you fans!