BREAKING: Creighton Football to Begin In 2015

In a stunning move that will likely shake the very foundation of the state of Nebraska, Creighton appears poised to begin playing FBS football in 2015.

Share All sharing options for: BREAKING: Creighton Football to Begin In 2015

Creighton University is set to announce the establishment of a Division 1 FBS football program during a press conference later today, Corn Nation has learned. The new program will begin immediately, with the first game to be played in the fall of 2015. Bruce Rasmussen, Creighton's Director of Athletics, reportedly consulted with former Nebraska head coach and athletic director Dr. Tom Osborne and UNO athletic director Trev Alberts on this move. (Neither Dr. Osborne nor Director Alberts were willing to comment at this time, directing all inquiries to the Nebraska Board of Regents.)

While Creighton will continue as a member of the newly reorganized Big East Conference for all other sports, their football team will compete as independents in 2015 and join the Big 12 in 2016 for football only. Creighton joining the Big 12 is a surprise to many of the sportswriter community. Our sources inform us that a significant donation from Berkshire Hathaway to the conference may have played a role. (Baylor, the lone hold-out, is considering their legal options currently but our experts indicate they may not have much of a case.)

(The Big 12 will reportedly announce the addition of a twelfth school in the days to come. We were unable to confirm which program would join alongside Creighton but we have heard rumors that North Dakota State is listening to overtures from the Big 12 about transitioning to FBS and joining the conference.)

"He couldn't look those kids in the eye and guarantee them one win a season any more. He was heartbroken."

New Texas athletic director Steve Patterson was instrumental in bringing Creighton in the fold. Patterson informed our source at Burnt Orange Nation that the Longhorns have missed having a team from Nebraska on their schedule "every second" since the Huskers' departure in 2011. He even indicated that Mack Brown's loss of enthusiasm was actually caused by despondency on the loss of his guaranteed wins against Nebraska than any personal failings as an administrator. "He couldn't look those kids in the eye and guarantee them one win a season any more. He was heartbroken."

Oklahoma, at first skeptical of the move, was quickly swayed when ABC/ESPN agreed to televise an annual Black Friday game between Creighton and Oklahoma as part of a double-header with Nebraska-Iowa. When asked for comment, Oklahoma AD Joe Castiglione suggested that many of the fans of this new Creighton team would be the same that rooted for Nebraska during the best days of the Nebraska-Oklahoma rivalry, so really "it's all of the calories without any of the guilt". In order to accommodate evening programming, Nebraska-Iowa will be moved to a 10am kickoff.

The Bluejays are expected to announce their intentions to play at TD Ameritrade, home of the College World Series, in the fall. Portable seating will be added in to increase capacity to 57,000 "rabid Bluejay fans". While no official press photos are available at this time, we expect the TD Ameritrade football setup to parrallel that of the now-defunct Omaha Nighthawks.

Creighton is also expected to announce the addition of Lil' Blue to the Creighton family, an adorable inflatable mascot to be used for football and football-related events only. 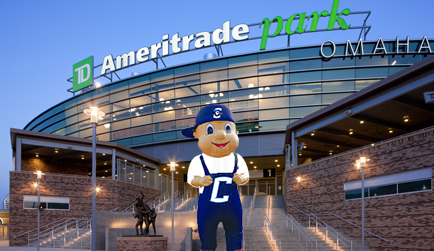 One potential stumbling block for approval from the NCAA is the school's continued use of a perhaps improperly spelled team name. The NCAA has recently taken a strong stance on names and may potentially make an example out of Creighton. Freedom of information requests submitted with the NCAA and Creighton remain unanswered in regards to this important detail.

Creighton will conduct a nation-wide search for a head coach. Our sources tell us to keep an eye on former Texas head coach Mack Brown. Discussions have been on-going and appear to have started shortly after Texas' loss to BYU. This seems to validate sources who had indicated a connection between Brown and Nebraska. There does appear to be significant interest between both parties and we anticipate a deal to be struck within a week.

This seems to validate sources who had indicated a connection between Mack Brown and Nebraska.

Our sources inform us that Coach Brown is particularly interested in a potential annual game against Nebraska as the annual in-state win will help with recruiting to the new program. There is also talk that Doug McDermott has been approached by Brown as to his interest in playing quarterback for the Jays in 2015. If Mack Brown can get McDermott, that may be the coup of the recruiting season and a huge boon to the fledgling Jays football team.

While talks have begun about an annual game between the Creighton Bluejays and the Nebraska Cornhuskers, it appears that UNL carries large reservations about this move. Major points of contention appear to revolve around fan confusion about which team to root for. Creighton fans may choose to not travel to Lincoln, an outcome that could threaten to end Nebraska's NCAA-leading sell-out streak. UNL athletic director Shawn Eichorst was unwilling to comment as appears to be standard policy.

As part of this move, Creighton University has enlisted the assistance of this site to help true blue Creighton fans make the transition from "Jayskers" to "Bluejays in the fall". We do apologize for having misled you earlier today, but we were under an embargo. While we have enjoyed covering Nebraska athletics, we feel this is a once-in-a-lifetime opportunity to follow a football program as it goes from scratch to champion. The unparalleled access to the team is impossible for journalists like ourselves to pass up as we'll be embedded with the program and following their every move. We will also begin coverage of all of Creighton athletics as part of this deal.

(Ed. Note: While we cannot disclose the financial particulars of this deal, rest assured, we've been well-compensated. Sorry we're not sorry.)

Of course, in our role as Creighton's new fan ambassadors, you will see some changes around the site as we prepare for the launch of Creighton football. For starters, we will be re-branding the site. Corn Nation is no more: welcome to Dougie Nation! We will also be bidding farewell to some of our writers as they seek other opportunities. We thank them for their contributions and look forward to their work in the future. In the coming weeks we will begin to advertise to fill the voids left by our departing writers.

We previewed our logo earlier this morning, but here is that logo again for those of you who may have missed it. 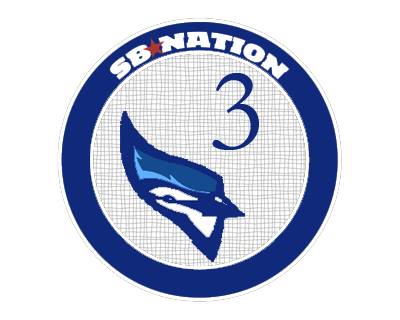 For those of you in our community who will not be joining us for this next chapter, we thank you for your time and contributions and we wish you all the best. For those of you who will, we're excited to have you. It's time to throw out those reversible sweatervests and go 100% blue!

After all, according to the latest graphics standards put out by the University:

The logo should never be used in direct relationship with the color red.

Like Corn Nation before today, Dougie Nation will continue to provide FREE coverage of Creighton athletics, from recruiting to results to hard-hitting analysis. Join the conversation and our community today!