We continue our Spring ball preview by taking a look at the Running Back positions.

Share All sharing options for: Nebraska Football: Previewing The 2014 Running Back Positions

Yesterday, we took a look at the Quarterback position. Today, lets focus on the ball carriers and lead blockers coming out of the back field.

Murat Kuzu - Jr. Has never played in a game.

Jordan Nelson - Soph. Has never appeared in a game.

Mitch McCann - Redshirt Soph. Has not appeared in a game.

The 2013 season was the Ameer Abdullah show. The Junior from Homewood, Alabama finally had the #1 part of the depth chart to himself after the graduation of Rex Burkhead, and boy did he show that he deserved it.

Starting every game for the Huskers, he put up one of the most prolific seasons in Husker history. Leading the B1G in rushing yards and 9th overall in FBS with 1690 yards, he also led the B1G in yards from scrimmage with 1922 total. The year-end accolades of being first-team All B1G by both the coaches and the media, third-team All American, and a Doak Walker Semifinalist. Oh yea, don't forget being an Academic All Big Ten member too.

While Ameer was the man who toted the ball all over the field, Imani Cross was the man on the goal line, leading the team with 10 rushing TD's. 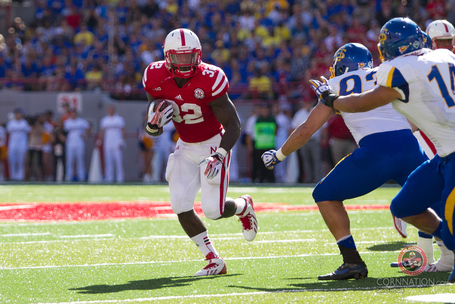 Terrell Newby found a few touches here and there, starting off the year with a season-high 76 yards vs. Wyoming. Newby also had appearances on both kickoff and punt returns through the season. 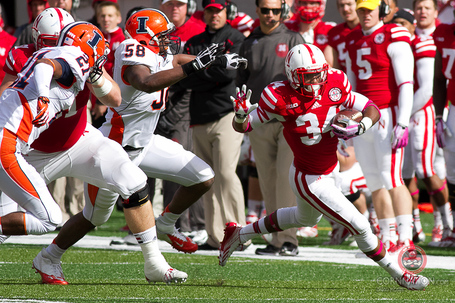 With the addition of redshirt candidate Adam Taylor into the fray, there's a lot of folks who will be looking for a touch through a game. We know Ameer will be there, and Imani is the man on the goal line. Past that, trying to figure out where Taylor and Newby gets their touches will be interesting to see. Taylor will be there in case of injury to either one of the first two guys on the depth chart, so the one to watch will be Newby here. Tim Beck seemed to found a spot for Newby as Jamal Turner was injured in the second part of the year, using him for things like jet sweeps and option plays out of the slot. However, with the return of Turner to the starting lineup (and as long as he stays healthy), it's easy to wonder where touches will come on offense for Newby. He could be a player on Special Teams still, but with others there too, it's another situation where there may be more bodies than touches available.

At fullback, Andy Janovich will be the starter heading into the season as C.J. Zimmerer has graduated. Janovich is the only Fullback on scholarship, so he should be the man leading this group through the spring and fall camp periods.

Players in bold are gone. Note that nearly all of the production from last season returns.