In what had turned into a magical season for this Husker squad, it did not carry over into post season play, falling to the Baylor Bears in San Antonio 74-60.

The end of the 16 year tournament-less drought came to an end today for the Nebraska basketball team. Unfortunately, their six game losing streak in the dance did not. In what had turned into a magical season for this Husker squad, it did not carry over into post season play, falling to the Baylor Bears in San Antonio 74-60.

The Huskers came into this game looking to write a new script about Nebraska basketball in March. They had an opportunity to do something that had never been done. And they played like they felt the weight of that burden to start. After hitting their first shot of the game, the Huskers missed their next nine attempts from the field, not hitting again until almost 10 minutes has passed. Fortunately for the Huskers, however, the Bears were struggling from the field as well. Nebraska was doing everything it needed to do to win the game except make shots.

As the half came to an end, things hadn’t gotten much better. They were 6/26 from the floor, 0/11 from behind the arc. Nebraska hasn’t been a great shooting team this season, but they weren’t terrible, either. Certainly, not this bad. Things surely would get better in the second half, and they did. Unfortunately, Baylor improved offensively as well. The two teams basically played even, but the Huskers had chipped some of the Bears 15 point half-time lead down to 11, then things got crazy.

The Huskers had grown more and more frustrated by the officiating in the game. In the first six minutes of the second half, the Huskers had been whistled for four fouls, the Bears just one, despite the Huskers getting back to their aggressive, attacking the rim mentality that has served them so well this season, getting the deficit to nine points after a Ray Gallegos three. The wackyness began after Petteway was whistled for his fourth foul with 13:56 to go in the game, Head Coach Tim Miles had had enough, he let the referees know exactly what he thought of the job they were doing and they did not appreciate his criticism. He was whistled for a techincal foul. Kenny Chery hit both of the ensuing free throws, building the lead back to 13, and would shortly swell back to 15.

The Huskers were still clinging to a small glimmer of hope at the under 12 media time out, but as the Bears ran their offense, the Husker bench noticed the shot clock was not moving. Miles tried to get the attention of the officials, but all they saw was Miles waving his arms wildly and approaching mid-court and Karl Hess, one of the officials in the game with a reputation for a quick fuse, assessed Miles with his second technical foul. His day was done. Hess would later acknowledge his mistake to assistant Craig Smith, who took over in Miles’ absence, but the damage had already been done. Miles was gone. The Huskers spirit was broken, the hole was too big to climb out of.

This season will be one that will live on in the memories of Husker Hoops fans for years, even decades to come. The sheer unexpectedness of the run this team made, the way they came together and endeared themselves to this fanbase is something to be celebrated. Today’s outcome should not diminish any of that. This is a team that is set up to win a lot of games next season and beyond and for many fans, they got a taste of what is to come. If this was the appetizer, we’re in for one hell of a main course. 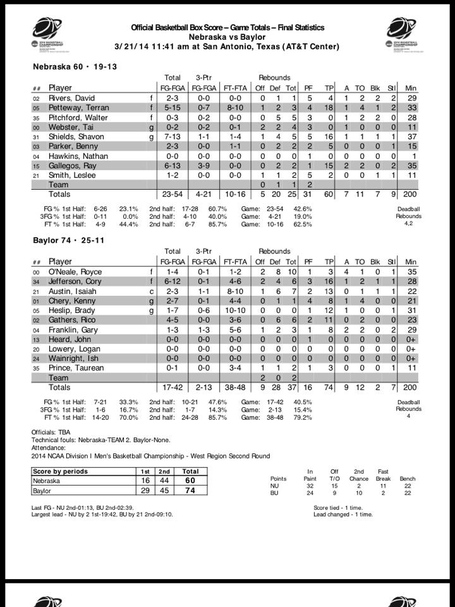