I'd really rather we were having an open thread for Nebrasketball today, but apparently that wasn't meant to be.

Nebraska baseball playing a doubleheader against UC Irvine at Hawks Field. This starts at noon. Nebraska lost last night's game 7-6, nearly rallying in the bottom of the ninth.

Nebraska softball playing against Northern Illinois in the Jayhawk Invitational at Lawrence, Kansas. This game starts at 3:30 pm. Then they play Kansas at 6:00 pm. Both games are available via audio via your usual audio sources.

Remember you can always use the Husker app on your phone and listen to games live. This is how I follow baseball for two reasons:

- Our baseball announcers Greg Sharpe and Lane Grindle are damned good announcers. They really are a joy to listen to.

- BTN doesn't show the games even though the Big Ten is starting to play home games. Why is that? WHO THE HELL KNOWS?

And of course, there's the Big Ten Basketball Tournament, which you can watch even though we're not in it. You should watch it to become a better basketball fan, and because you can watch how the Big Ten referees won't call fouls against Aaron Craft again, and how the announcers can talk about what a wonderful defender he is because I know you'll like that sort of thing. 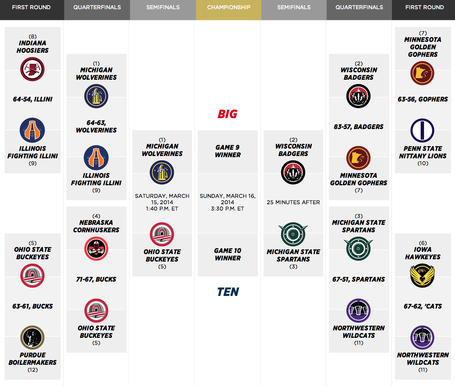