Our Spring preview continues by taking a look at the people on the Defensive Line this coming season.

We're taking a look at the Nebraska roster as they head through the Spring Practice portion of the season. If you've missed anything so far, go here and you'll find all of the Offensive previews.

Garret Johns - Sophomore, has not appeared in a game
Logan Rath - Sophomore, sat out the '13 season after transferring from South Dakota State

It was an interesting time for the Defensive Line last season. In the '13 season, it was obvious that this was the weak point of the entire Blackshirt Defense, and quite possibly the entire Nebraska Football team. Thad Randle, the SR Defensive Linemen, played as much as he could with two knees that seemed to be injured the whole time. Plus, with Cameron Meredith playing much bigger than he did in his younger years in Lincoln, Baker Steinkuhler graduation, and Chase Rome going AWOL on the team, there wasn't much in the interior. At Defensive Ends, Eric Martin seemed to be the only consistent rusher. 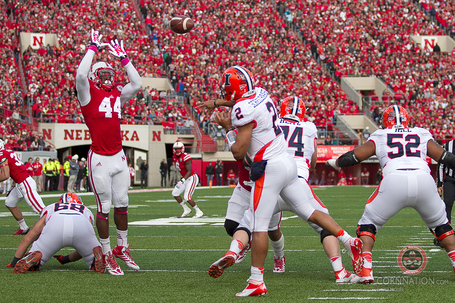 Not only did Randy Gregory come invigorate a much needed pass rusher into the Huskers wheelhouse, Randle finally had the depth on his side and behind his spot, which was much missed in '12. Valentine started slowly, and Kevin Maurice added great depth. Collins and Curry got better through the year, helping the Huskers give up 40 less yards a game in 2013 and obtaining 5 more sacks in the season.

On the outsides, Avery Moss was a grand compliment to Gregory on the opposite side, however because of Avery's self-induced ban from campus till New Year's Day 2015, players like McMullen, Keels and Natter will get the reps that Moss would have gotten. There is help coming in the beginning of the season in Peyton Newell, Mick Stoltenberg and DeAndre Wills to help both depth and push everyone for the cream of the crop to rise to make the DL much better.

With no one on the scholarship part of the DL a Senior this coming year, there's going to be some expectations for this whole group to only get better.