Scarlet, Cream, & Nothing In Between: A Look At Diversity In Husker Sports Coverage

An analysis of minorities in sports journalism, why diversity in the workplace is important, and how Nebraska Athletics' major information outlets can increase diversity.

Share All sharing options for: Scarlet, Cream, & Nothing In Between: A Look At Diversity In Husker Sports Coverage

Variety may be the spice of life, but uniformity is the norm in Husker Nation's sports coverage.

Take a look at your favorite newspaper's sports page. Scroll through your favorite Facebook group. Flip to your local news channel. The athletes you read about and the legends of yesteryear you see being interviewed reflect the face of America, or at least the one Coca-Cola tried to embrace, but if you lined up the narrators of these stories you would feel like you were transported into an episode of Mad Men.

Case in point, we had a myriad of articles (1, 2, 3) detailing Husker running back Ameer Abdullah's faith and how it motivates him every day, but how much more insight would we have been provided if the writers could draw from personal experiences about the subject material? To steal a line from NBA writer Jesse Taylor, sports coverage regarding minority athletes in its present state is like taking the writers from Friends and asking them to script episodes of Chappelle's Show. The main ideas may be conveyed, but the depth just isn't there.

So just how diverse is the sports journalism landscape in Husker Nation?

Based on my very nonscientific scan of all the major Husker athletics information sources*, I accounted for 97 total positions related to covering the Nebraska Cornhuskers in some capacity. Of the 97 positions, seven were held by non-whites, three of which were former Husker football players. I couldn't find data to support my eyeball test, so given human error, let's say roughly 4% of the approximately 100 positions analyzed for this exercise were held by non-white, non-former athletes. 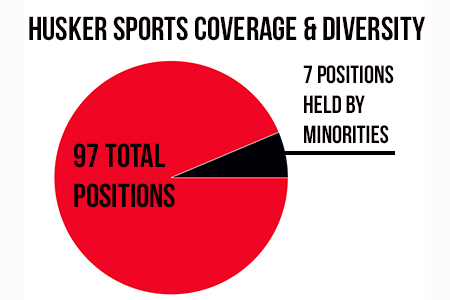 For comparison's sake, let's take a look at the following statistics from The Institute for Diversity and Ethics in Sport's 2012 report. The report, which comprised of more than 150 major newspapers and websites, revealed that in 2012, 90.9% of sports editors, 86.6% of assistant sports editors, 83.9% percent of columnists, 86.3% of reporters and 86% of copy editors/designers were white. The fact that the percentages of males in those same positions were 90.4, 82.8, 90.2, 88.3 and 80.4 was also noteworthy and probably worth an in-depth analysis in itself. 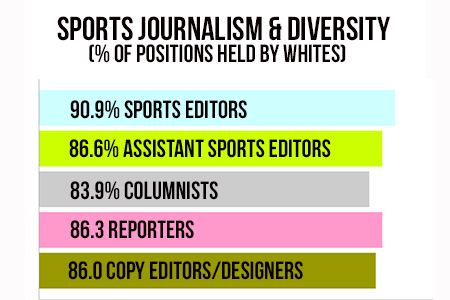 To take an even higher-level view, let's take a look at the most recent demographics available for the major cities in Nebraska, the state of Nebraska, and the major colleges near the University of Nebraska-Lincoln: 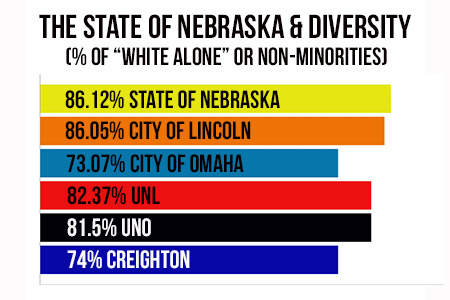 Based on the data above and without knowing the number of non-white applicants that apply to sports journalism jobs each year, the percentage of positions filled by minorities should be somewhere around 10-15% rather than the 4-7% determined in the research completed for this article.

So what's the point? Why is diversity necessary in sports journalism?

"It's an issue because when you survey the storytellers in sports, it doesn't reflect the demographics of our society," explained Omaha World-Herald staff writer Jon Nyatawa. "And more so than that, it doesn't come close to reflecting the locker room makeup. If I'm a 24-year-old black athlete, on a team that's 50 percent black, 40 percent white, and 10 percent Hispanic -- wouldn't it feel just a little awkward to step on the podium at press conferences and see that 90 percent of the people relaying my comments to the world are 50-year-old white men? So, yeah, it's an issue."

Additionally, diversity breeds creativity, knowledge, engagement and innovation in the workplace. For example, Professor Ron Burt of the University of Chicago conducted an empirical study in 2011 that revealed people with more diverse sources of information generate consistently better ideas. The graph below indicates that higher diversity of connections also translates to the perception of higher quality ideas, which is a fundamental component of innovation (click on image to view full-size version). 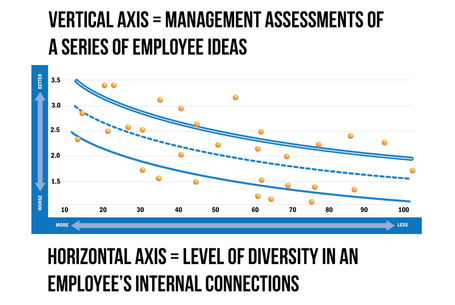 The United States is quickly becoming more diverse each year, and one of the fastest-growing demographics is people made up of more than one race. Sports news outlets, and companies in general, will have to employ a diverse workforce to cater to changing demographics.

The challenges of plucking recruits from the south are well-documented, but have we considered how a more diverse sports journalism workforce might affect potential African-American recruits' perception of a school like Nebraska? The assumption for most recruits is that the entire state of Nebraska is predominantly white and bitterly cold most of the year. We have minimal control on handling the latter issue, but the former assumption can be marginalized by making potential African-American recruits more comfortable with their environment by making the fishbowl of Nebraska football coverage more diverse. It's no coincidence that Bo Pelini replaced Marvin Sanders with Corey Raymond, Raymond with Terry Joseph, and Joseph with Chartlon Warren, all of which are African-Americans. Perception matters just as much as the reality sometimes.

"I haven't encountered any instances that come to mind where I thought the color of my skin or my heritage mattered at all. If anything, it's been a benefit. I can connect with black athletes a little better. We've had similar life experiences. I get their perspective," said Nyatawa.

The $64,000 question is how do we diversify Nebraska's major sports journalism staffs?

One popular solution may be to implement the NFL's often applauded and sometimes criticized "Rooney Rule" -- a mechanism to assure that teams interview at least one minority for their head coaching vacancies. The logistics to implementing this rule to all the information sources analyzed in this article aside, the Rooney Rule is far from a panacea.

Creating mandates may help minority candidates get looks they otherwise may not, but without accountability there will be concerns about inauthenticity and interviews with no intent to hire. Likewise, just filling a quota won't equate to success. Diversity needs to be engrained in organizational goals. Diversity often doesn't happen without deliberate effort. If it did, simply posting job openings and hosting job fairs would solve every problem.

For example, you may have heard Saturday Night Live recently hired a black female cast member and two black female writers to which many fans and critics of the show said, "FINALLY". It wasn't that showrunner Lorne Michaels didn't want to hire a black female cast member, but the fact that people of color are underrepresented in many of the traditional pipelines for talent is a very real obstacle to overcome. What SNL had to do was hold special auditions to find a black woman for their cast. This could be seen as lowering standards or making excuses to add an African-American to the cast, but it's more about changing where and how you look for talent to find fresh faces wherever they may flourish.

"I think it's pretty standard in this industry for media companies to emphasize the identification of minority -- and female -- candidates at the start of the job search process," commented Nyatawa. "But obviously, based on the diversity figures here locally and across the board nationally, actually hiring those minority reporters is a different story. But being an minority can open doors for you, too. I got my internship with The World-Herald back in college by meeting with an editor at a job fair at a National Association for Black Journalists (NABJ) convention."

When asked about initiatives currently in place to promote diversity in sports journalism, Omaha World-Herald talk show host Mike'l Severe stated, "I don't know of any other than what NABJ does for black journalists."

Even if policies are implemented and alternative talent sources are utilized, social qualifications are just as important for minority candidates to possess as any technical skills relevant to the job. The uniformity of sports journalists that cover Nebraska sports didn't happen deliberately, but through a series of networking that made people gravitate and hire people who they share similarities with. This more than likely made it next to impossible for anyone who's different in any way, former athletes excluded, from getting hired. Continuing with the SNL example, the short list of minority success stories, the Tim Meadows and Keenan Thompsons of the world, had mostly integrated, majority-white backgrounds that allowed them to assimilate and navigate through terrain similar to what they would later experience at SNL.

All that said, assimilation is a precondition for diversity. All successful multiracial environments need team members with commonalities. The issue with the current state of Nebraska Cornhuskers sports coverage is reaching beyond those commonalities, which in turn would diversify the workforce in more ways than one. However, those that have made it into the industry have had no complaints about their experiences. When discussing how different his experience working as a sports personality in Omaha was compared to his non-minority co-workers, Severe stated, "I don't believe my experiences have been any different as a minority here in Omaha."

Where do we go from here?

Sports journalism is mostly a for-profit and commercial endeavor, at least for the major outlets, and one of the main motivations has to be drawing as many viewers and readers as possible. The major outlets aren't in it to propagate social change and I fully understand that. However, my hope is that bringing this issue to light on a forum such as Corn Nation and presenting the value of a diverse workplace will bring about change or at least start conversations about diversity throughout the major information sources analyzed in this article.

The pressure to succeed, with or sometimes without the assistance of diversity policies, for minority hires will always be high as they may end up being stigmatized and marginalized as a diversity hire. I'm a firm believer in hiring the best talent, regardless of ethnic background, but I would like to see hiring managers push beyond their comfort zone in the name of providing a more representative voice to their audience. However, based on Nyatawa's experience, it may not be that simple:

"Unless you're Ray Lewis or Deion Sanders, employers looking for prospective minority candidates aren't going to hire someone who they feel is untrained. They want to bring on a person they can trust, someone who has experience, who has proven that he/she can be dropped into a beat or an area of coverage and do the job well. To be honest, I'm not sure there are enough minority reporters out there who fit that mold. Because really, what media organization doesn't want diversity? They're looking for it."

The moral of the story? Whether you value diversity or covet a career in sports journalism, you have to work for it.

EDITOR'S NOTE: The views expressed in this article are those of the author and the interviewees and do not necessarily represent the views of, and should not be attributed to, the Omaha World-Herald.