Husker Recruiting Under Bo: The Class of 2009

Part 2 of 3 as we look back at how each Husker recruiting class actually played out over time. Think of this one as the Martinez/Burkhead edition.

Share All sharing options for: Husker Recruiting Under Bo: The Class of 2009

Is there such a thing as a defining class for a coach? If so, many people would agree that it's the one they sign in their first full cycle of a recruiting year. Enough of these players should become regulars that any previous cries of "He's winning with X's recruits" will apply less as coach hits those 1st hot seat years.

(Note: "Winning with the other guy's recruits" is a negative only if you can turn a down program around to 7-9 win seasons with an occasional 10-win thrown in. If you can "win with the other guy's players" to the tune of BCS bowls & national championships, then it's ok. They don't complain about this in Auburn, do they?)

The 2009 class was a smaller one due to some holes and overloads that carried over. It was ranked as the #28 class by Rivals and did not finish in ESPN's top 25. There were no 5-star super recruits or reaches with lower ranked recruits. And it did produce two players who will be talked about for years to come.

Rex Burkhead - **** - 4 year player, 2 year starter, 5th all-time leading rusher, most carries in a single game, 1st team All B1G. Upgrade for eating the old 96er and asking for dessert, running the 40 in 5.3 while carrying a piano and having the charisma to sleep with any of your women he pleased but being much too nice a person to do so. As far as you know. He's Rex Freaking Burkhead. He gets that 5th star. - *****

Jesse Coffey - *** - didn't play, fell off face of the earth after 2010, Google is no help, maybe joined Santino Panico in underground MMA career? - *

Dejon Gomes - *** - JC transfer, 2-year starter, 2nd team All Big 12, probably 1st team if any of the voters had a clue what to call his position, no upgrade for looking like Predator's kid brother with a football helmet but it WAS cool - **** 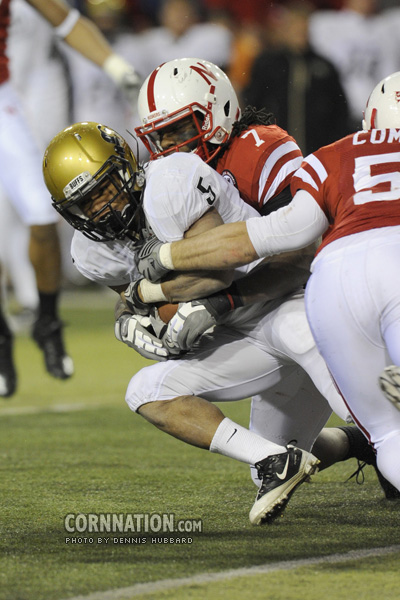 It rarely bled & no one killed it.

Eric Martin - *** - 4 yr player, started senior season, 1st & 2nd team All B1G, notable for suspension & penalties for burying shoulder into soon-to-be semi-conscious dickheads who thought it was a better idea to stare up in the air at the fucking football instead of looking for Eric Martin - **** 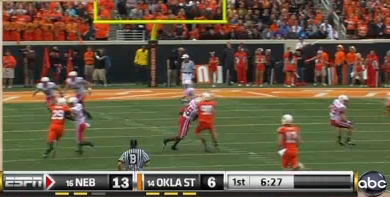 In actual performance vs. the initial Rivals rankings, the 2009 numbers improved slightly, but given the subjectivity of everything, we can probably call that a push for the two seasons.

There were two noticeable differences, one good and one bad - and maybe the bad wasn't actually THAT bad.

1) 25% of the original class transferred. At first glance, that seems eye-popping, but a look at the five transferees reduces some of the alarm. Three of the five (Green, Middleton, Robinson) appeared to have a roadblock in front of them on the depth chart. Four of the five (add Williams) went to schools that would be considered definite downgrades & Kerr never saw the field at Southern Cal. In the end, no one critical was lost.

2) The 2009 class of 20 actually provided 2 MORE starters than the 2008 class of 27 as well as two of the biggest names to come through the program in years in Martinez & Burkhead.

Given these facts, it is safe to say that, despite being similarly ranked in the beginning, the 2009 class proved superior to 2008 despite its size. However, while it might have crept up and been considered a top 25 class, it wouldn't have done so by much, and for coincidence's sake, it's interesting to note that the Huskers finished #25 this year with the 5th year seniors from this class.