Husker Recruiting Under Bo, a Review: Class of 2008

On national signing day, everyone, and I mean EVERYONE, can tell you the exact future value of a recruiting class before any of the players ever take a single snap in a college game. As Pelini's third group prepares for their fifth years, I thought we'd take a peek backwards to see how these first three classes actually panned out.

Share All sharing options for: Husker Recruiting Under Bo, a Review: Class of 2008

I've always felt it odd that we make a final decision on a recruiting class approximately six months before they tell their first Tri Delt pledge, "Yo, I'm a Husker," and rarely glance back to see how it shaped up after all of their careers actually played out. There's a little bit of that on the NFL side with the draft, but those are generally assigned a letter grade (A, B+, etc) and fan interest usually wanes after the first couple or three rounds play out.

College recruiting though? Wow. Every 17 or 18 year old kid is analyzed from his generally fictitious 40 times and bench presses to two and half minutes of carefully selected clips, some of which involve running around in shorts, throwing balls through hoops, and many other things that have never taken place in an actual football game. From this incomplete catalog, we know all.

Of course, Bo has been vilified for being unable to bring in a top five class despite the travel resources of mid-major squad and a home state that has produced about five 4-5 star recruits in the last 30 years while schools like Texas can fill a class without leaving the state. These aren't excuses, just facts. OK, maybe I'm ranting a little. That's another article entirely.

But how has Bo actually done? As trying to go back and effective rank all of the Division classes would probably require more time than Stephen King took to write The Stand, I'll just hit this on a micro-Nebraska level and see how each Husker class performed in comparison to its initial expectations.

Starting with 2008, I will review Bo's first three recruiting classes and try to assess how they played out over time as a class and how the players came out individually as compared to their initial rankings.

I'll assign post-career stars for each player using the VERY general guidelines below with maybe a small bump up or down for positive or negative intangibles:

(Yes, I understand there's quite a bit of room for interpretation here - feel free to do so in the comments)

- These will be based on their NEBRASKA career only. Success elsewhere after transferring will not count in their favor.

- This will be looked at strictly from a football standpoint. Believe me, that's tougher than it sounds. It's a crappy feeling assigning one star to a kid who stuck it out for 4-5 years and made all kinds honor rolls and all-academic teams. Bo's kids could give Stanford's team a run for their money in a Quiz Bowl. I'm not kidding.

For the class review at the end, I'll list the class' initial rank in Rivals followed by:

This was Bo's first class and, as he was hired about a month and a half before signing day, was probably more famous for who decommitted (Gabbert, Trevor Robinson, DJ Woods, Jonas Gray, etc) after Bill Callahan was fired. In a short time, Pelini regrouped and signed 28 players for a class that ended up ranked 30th by Rivals and 22nd by ESPN. Most of the higher end talent chose other directions with Steinkuehler, Compton & Whitmore being the only 4/5 star players to reaffirm under the new coach.

Khiry Cooper - *** - 13 catches freshman year, little seen after that while trying to play baseball as well, transferred to Tulsa for 2012 - **

Micah Kreikemeier - ** - The first recruit of the post-Callahan era, played some special teams & mop-up duty as a senior - *

Tim Marlowe - ** - Only one start but regular contributor for all four years, upgraded for volume of play and excelling on special teams as well - ***

Collins Okafor - *** - barely saw the field, no upgrade for decommitting to have a televised hat ceremony on signing day - *

Kyler Reed - *** - played/started regularly for 3 years, probably should have ended up higher but can't upgrade due to not being employed as much as the fans thought he should - ***

Kody Spano - *** - Most camels have better looking knees, the very definition of a career cut short by injuries - INJ 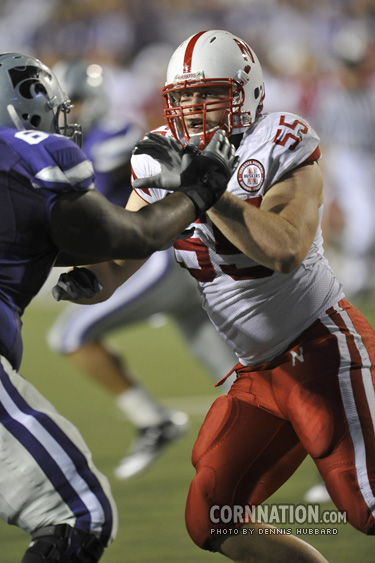 Alonzo Whaley - *** - Began earning playing time as a soph, gradually increased until becoming a regular starter as a senior - ***

David Whitmore - **** - never made it to campus, attended Iowa Western then Baylor - *

At an initial glance, it would appear that this class was a bust and to an extent that is true. A class of 27 (minus Spano) produced only three offensive and six defensive starters. Of their higher ranked (4/5 star) signees, only Compton played to expectations. One can wonder if Baker may have been better suited to the O-line where he received his initial ranking and Whitmore was a no show. And 16 players came in below expectation.

However, several played above expectations and Dennard was an absolute home run.

Does Pelini deserve a bit of a pass for this? With only a month and a half to cobble together a class that had around 14 players decommit, I think that's extremely fair to say. At that point in time, quality definitely had to take a backseat to quantity with a suddenly dwindling class and pool of available players.

I'm also entertaining a theory that three stars is a bit of a fallback rating for Rivals. Four or five star players are what make the fans drool and two stars or less are the kiss of death when it comes to the upper end of the BCS spectrum. I believe that 1) for a variety of reasons (moved around, didn't attend camps, talented but not from TX, CA, FL or GA, etc.), the majority of ranked players under consideration end up being assigned three stars, and 2) Rivals tends to err with many players who are borderline two's in the three star range. I believe the combination of these two factors produces a greater number of three star rankings than any other number - at least where players in which qualifying schools are interested are concerned. (Anyone feel free to dive into Rivals.com & crunch those numbers.)