Inside the Playbook: Multiple Ways to Option the Playside DE

We look inside Nebraska's playbook at how they give defensive ends a lot of responsibility in their spread option game.

Share All sharing options for: Inside the Playbook: Multiple Ways to Option the Playside DE

Introduction
Over the past few years, Nebraska has done some creative things with the spread option run game. The veer play, once a staple of many triple option offenses as Nebraska fans know, has made its way into spread football via the "inverted veer". Once teams started figuring out the straight veer play, teams started incorporating a veer triple option, which one of the ways Cornhusker teams of the ‘90s moved the ball at will on over-matched opponents. It is no different in the spread system. In the past few years, I've seen Nebraska do two different things to counter the inverted veer version of the scrape exchange defense. In this article, I will highlight those two plays.

Veer
First, let's start with the basics of the veer read. I'm assuming I don't need to spend a large amount of time explaining the system to this fan base, so I'll only touch on the basics.

From under center, the QB will step laterally at a 4 O'clock position. His eyes are immediately drawn to the playside DE. Meanwhile, the RB is taking a direct line off tackle, well inside of the defensive end. The QB is reading this defender, and if he crashes down to squeeze the RB's hole, the QB will pull the ball from the RB's belly and keep it around the edge. 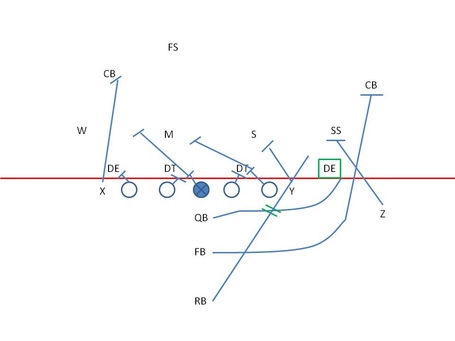 Note here that this is not Power O blocking, as from the under center position you cannot pull an OG to the point of attack.

Later, a second read was added for when the QB pulled the ball. Now reading the second defender outside the DE, the QB could read him as he would a typical speed option. If that defender cheats down on the second RB, the QB keeps and cuts up field. If that defender attempts to stop the QB, the QB pitches and the running back is in the open field. Essentially, two players are being "blocked" by the option. 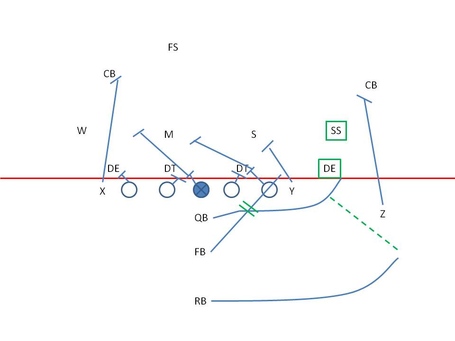 Inverted Veer
Perhaps the newest fad for spread to run teams is the inverted veer. The change here is that the QB will read the playside DE rather than the backside DE. It also allows the OL to utilize a power O blocking scheme rather than the zone blocking scheme of the read option. This means offenses are getting more blockers to the point of attack and still have two threats in the run game, slowing down a defense and making them hesitant regardless of where the RB lines up relative to the QB. 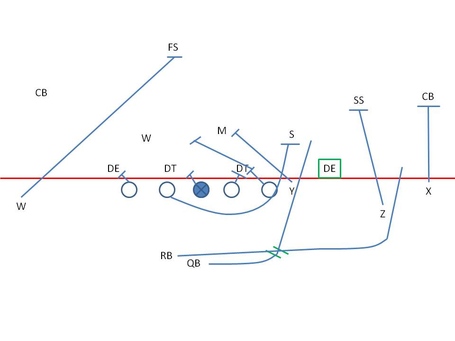 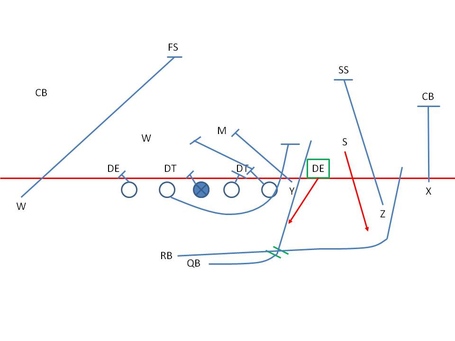 See here, the QB will read the DE crashing and will give. But the give is running straight into the teeth of the CB blitz. Because of the blitzing angle, this forces the RB to cut it back up, almost using the QB as a lead blocker (a typically ineffective one) and back into the pursuit of the defense for a minimal gain at most.

Inverted Veer Triple Option
One of the few times a team has run a play on Michigan where I just shrugged my shoulders and laughed was when Nebraska pulled out the inverted veer triple option back in 2011. I mean, it was pretty awesome. 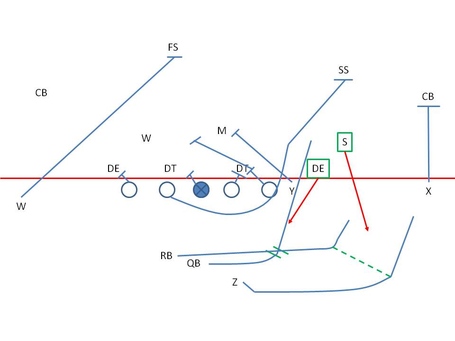 You can see that this is essentially the same exact play as the Veer Triple option above, but here the RB has a pitch option to another player. When the #2 defender outside the EMOL tried to leverage the defense, the pitch man was wide open to break contain, giving Nebraska an easy TD.

The reason this isn't run more is the difficulty in taking a handoff and then getting the ball in a position to cleanly pitch it. This is more difficult than it seems, and a second man off the edge quickly can make a big play for the defense. The other worry is that the two players do not get enough reps to properly have a feel for the pitch relation aspect of the pitch option portion of the play. It's a risky play that can pay great dividends if run correctly.

Inverted Veer Bubble
Since the days of Rich Rod at West Virginia, a method of running read option and defeating the scrape exchange has been the added bubble option on the backside. The QB, by reading the second defender, decides to keep or throw the ball on the bubble. The natural motion of the read fake and the run gets the QB in a natural position to make a play, and this is why it is so often an add on to the typical read option play.

Now, the Cornhuskers have added it to the inverted veer on the front side, as seen against Wyoming (the video below is actually OSU running it on Nebraska, because I couldn't find the video of Nebraska running it). 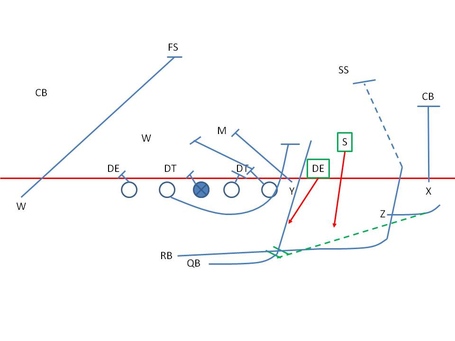 Note here that Miller is not reading it as Martinez did. This is a designed QB run, as can be seen by the kick block from the pulling OG. But the rest of the motion is the same.

Now I'm forced to make some assumptions on the correct read progression here (and had to show OSU only showing the look against Nebraska in the past, as I don't have film to the Wyoming game). The QB is still reading the DE on the front side first. If the DE maintains contain then there is obviously no scrape exchange on the outside, and the QB can cut the ball up quickly. If the DE attacks, the QB must elongate the exchange between himself and the RB. This means he must ride the RB as he turns his eyes to the #2 defender of the EMOL. The read must be extremely quick, and as soon as he sees attack he must pull the ball, turn, and fire the bubble. If he doesn't see attack, he gives to the RB.

This is still a very effective play with the Power O blocking scheme. The pulling OG to the front side still provides a seal to the outside, and the threat of the QB taking it up field forces the defense to be gap sound in the box. This means they can't flare out to the sideline right away, and can then get sealed with the blocking scheme. On top of that, if the QB pulls from the RB's belly, the RB can easily pass by the exchange player and move on to the safety level to make an extra block for the bubble receiver.

As you can assume from the old veer triple option, Nebraska will likely also run the veer from the pistol formation with a bubble attacked to the playside as well.

Conclusion
So Nebraska not only has the ability to attack the backside DE with the read option, they can also attack the front side QB in many ways as well. They have the ability to run the read triple option, the read bubble option, they can run the speed option, they can run the inverted veer, and they can run the inverted veer bubble option. This maximizes run game variety. It makes defenses have to play passive and read then react, rather than just react. It allows Nebraska to utilize both man and zone blocking schemes. And it gives numerous looks to the defense while keeping it relatively simple for the offense. It's these sorts of concepts that make for an explosive run game, and start to open up the pass game over the top.