The Wyoming game falls in line with a disturbing trend of schizophrenic defensive performances.

Share All sharing options for: Wyoming by the Numbers - Lousy Defense Edition

Since 2007 (the earliest season for which I have detailed stats) Nebraska has given up 600+ yards of total offense 5 times. Those games include:

The Husker defense has given up 498+ yards seven times:

Other than the 2008 Oklahoma game against a team that had one of the most prolific offenses in modern college football history and played Florida for the National Championship, all of these games have something in common. They happened in 2007, or within the last year. Perhaps most distressing is the fact that the last three games Nebraska has played are on these charts.

I'm at a complete loss to explain what is happening, but every part of my being screams that Nebraska is heading for a disappointing, if not losing, season in 2013.

After the game I tweeted:

Pelini is not on the hot seat. That is all.

I'm not sure about that this morning.

Consider this chart of Nebraska's average total defense since 2007. 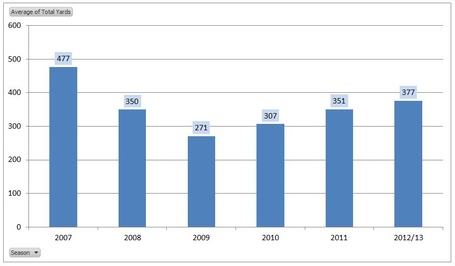 Things are getting worse, not better, in Lincoln.

The next chart shows every game since the beginning of the 2007 season (you may want to click to expand it). Three things jump out at me: (1) 2007 is still the standard by which bad defenses are measured, (2) Pelini's defenses are far more unpredictable and inconsistent than Callahan's were, and (3) prior to the last three games Nebraska has played, there was never a three-game stretch in which the the defense was as consistently awful as they have been. Not even the 2007 team had a three-game stretch in which the defense stunk it up as badly has this last stretch has been.

Something has to give here. I don't believe Nebraska can continue to outscore it's crappy play on defense. The Huskers are in serious danger of losing to UCLA, Northwestern, and Michigan simply because those teams have the offensive firepower to hang 600+ yards on Nebraska.

The implication of all of this is clear, if hard to accept: Pelini MUST fix this or he will not be the head coach at Nebraska for much longer. Pelini was Osborne's guy. If TO were still the Athletic Director I would feel differently, but he's not. Eichorst doesn't have the personal investment in Pelini that TO did. I can't believe that he will allow this to continue.

I like Bo. I like his work ethic and I really like seeing Nebraska manhandle teams for 360+ yards of rushing. But I also think that the offense's performance is due to Tim Beck, and the smart money is on him not coaching at Nebraska next year. Where will Pelini be then?