New East Stadium expansion seats push prices down across Memorial Stadium for Huskers' 2013 campaign. If you've wanted to jump in and lock in season tickets at a low donation level, this could be one of your best chances in years.

Disputed during divorces and willed at death, Nebraska season tickets have always been a family treasure. The demand for Husker tickets has always been strong, with an NCAA-sellout streak that dates back to 1962 and the Bobfather.

While Nebraska maintains a waiting list for donation free season tickets, the reality has been that for the last decade or more, it's been possible to donate to the university and essentially get your preferred location. Once you lock in a donation level, you can continue to renew your seat at that price. Entering the 2012 campaign, a seat on the 50-yard-line would cost you the face value of the season ticket, plus $3,500 dollar donation per ticket. As long as you kept ponying up the $3,500 each season, the seats would continue to be yours, even if donation levels rose.

It's doubtful most of the people in that section 6 or 26 are paying $3,500 on top of their ticket face value. Most have been sitting there for years or decades and will only relinquish their seats upon death (and even then, sneaky family members may try to continue to renew even after their owner has departed the Sea of Red).

While this illustrates the very low supply of season tickets available in high-value areas, it doesn't necessarily correlate to aftermarket prices on these tickets. During the mid-90s, season tickets were gold, with aftermarket values at extraordinary levels for a Top 5 college football in its prime. Buyers also didn't have the marketplaces and options (ebay, stubhub et al), to compare and contrast from a see of potential buyers.

Smart buyers could potentially buy their tickets completely via aftermarket (especially with current and upcoming home-schedules that are light on big games), and have better seats than donating and ending up in the upper end zone. This illustrates the disparity between the required donations, and the secondary market value of the tickets (due to lack of supply from the Athletic Department).

Beginning with the North Stadium expansion, and now with the new East Stadium expansion, Nebraska has drastically increased the supply of tickets on the market, and for the first time since 1923, added new regular (ie, non-skybox or club) seats between the 20 yard-lines.

To illustrate the effects of the new seats on the Nebraska season ticket market, let's take a look at the pre-2012 season donation levels around the stadium. 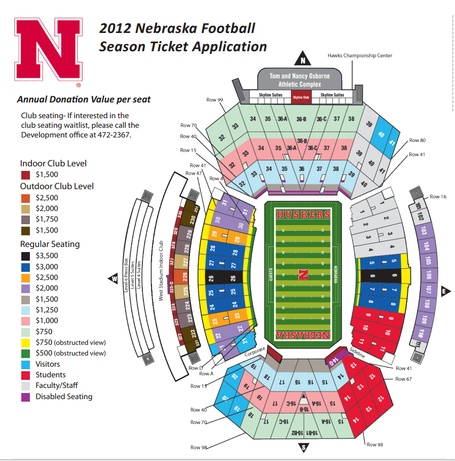 Prior to the 2012 season, the cheapest non-obstructed season ticket in Memorial Stadium required a $750 dollar donation for the upper reaches of North and South Stadium. Keep in mind there is some deviation inside of these areas and it's very unlikely that $750 would've gotten you 99th row. I've heard stories prior to the 2011/2012 season of folks getting season tickets for under $300 per seat in those upper 90 rows.

This shows just how hard it is to secure good seating in the stadium. Despite the extra seats from the North Stadium expansion, and the up-and-down nature of the team, generally speaking, you needed to pay nearly an extra $100 per game in donations to "secure" seats inside the stadium. Hence why smart buyers could be better off buying tickets on the secondary market at lower prices.

Again, remember, most people in the seats already aren't paying those levels, they are grandfathered in at their previous level whenever they bought the seat (in the expansion year of 2005 for instance, when it was much cheaper).

Let's now look at how Nebraska projected season ticket levels (rather optimistically), going into the new East Stadium expansion and 2013 season. This is where it gets interesting. 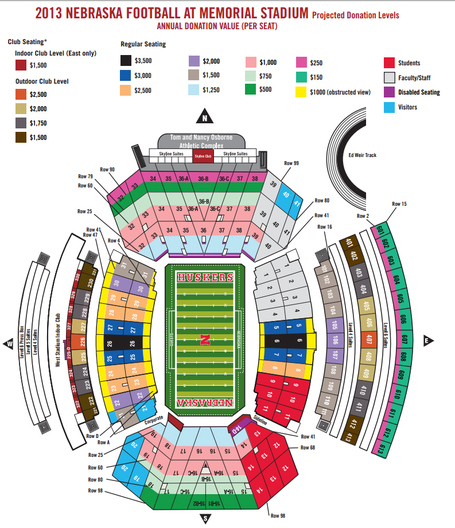 The new upper east balcony was projected at $250 for first two row seating, and $150 per seat for the back thirteen rows. This was in line with the roughly $150-250 donations required in the 2005 North Stadium expansion for all but the worst 1,000 seats (which were sold without donation required).

But it's clear Nebraska underestimated demand for the new east balcony. Particularly when it came to folks looking to move out of the high rows in North / South stadiums (who saw low projected donations that matched their current ones). That combination yields massive price drops in the end zone, with higher than expected prices in the balcony. It also resulted significant price drops on the sidelines as well.

Check out where things actually ended up: 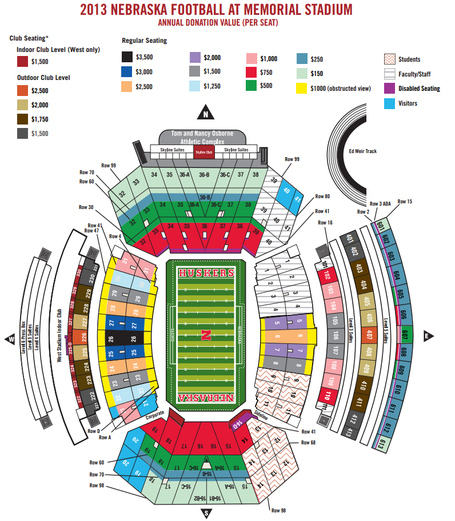 First, the higher-than-expected demand for the new balcony is apparent. Section 607's first row donation weighs in at $1000, an increase of $750 from the projections (though we have heard that folks paid far less than $1,000 for those seats). The only area that comes in at the expected price are some of the front rows on the ends at $250, and sections 601 and 613 (on the ends) with the $150 per ticket price. 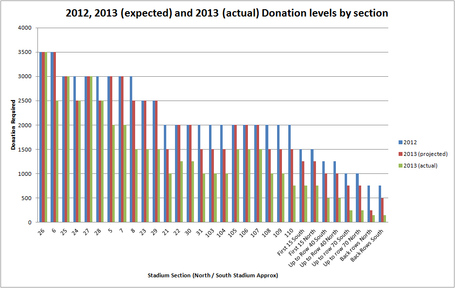 However, it's also apparent that this has satisfied much of the demand from outside buyers and even current season ticket holders as well. This is illustrated with the massive drop-offs across the board besides the club seating and inside-the-20s sideline seating. Both the East and West sidelines see prices dip to the lowest levels I can remember. Section 31 at $1,000 a donation is half price compared to the $2,000 dollar 2012 donation level. Section 6 on the East sideline dropped from $3500 to $2500, and sections 5 and 7 both saw a similar drop from $3000 to $2000.

Not a single seat in North / South stadium retained the expected donation level. While the 6000 or so new balcony seats going for more than expected certainly counters SOME of this, this is by far the biggest shock to Nebraska season ticket pricing I've witnessed. 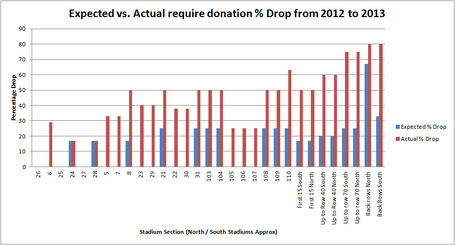 On average (and this is only a rough estimate across the North / South end zone sections), donation levels for most EXISTING non-club seats fell between 25 and 80% between the 2012 season and 2013 season.

It also may be concerning that Nebraska has rarely shown price bands in the $150 range, and certainly not for a full 30 rows in both North and South stadium. Rumors of Nebraska still holding unsold season ticket inventory seem more plausible upon viewing this new donation level chart.

While new tickets in the shiny new upper balcony are commanding a higher than expected price point, most of the rest of the stadium is on sale. If you've wanted to jump in and lock in seats at a low donation level, this could be one of your best chances in years.