Adidas Announces Nebraska Alternative Uniforms for UCLA Game, which contain black and at the least are better than the Noid Uniforms for last year's Wisconsin game.

As we speculated over the weekend, Adidas has tweeted out photos of the alternative uniforms Nebraska will wear for this year's UCLA game. 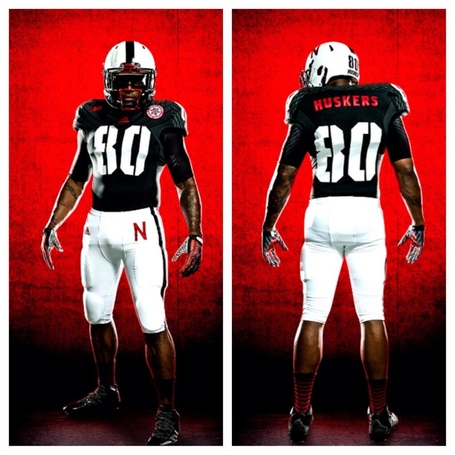 I'm probably not the best choice to be writing about alternate uniforms - I don't care about this kind of stuff a whole lot. I guess if the "kids" like them, then maybe I should just shut up.

My real comments are as follows:

But, since comments are required, here are some others:

- Oh, look, we have a black shirt. Everyone poop!

- The numbers are large. At least they won't have that problem this year.

- Are the tattoos optional?

Crazy to think that Nebraska finally busts out black jerseys for a game someone will probably win 55-48.

Update - there's a video so you can squeal even more!!!!

Update: The players react to the uniform...