A look at the final rounds and whether there's anything to learn from a simulated tournament involving the best Husker teams of the last 32 years when talking about the right size of the college football tournament.

Last month I introduced the brackets and results of first round games in the Husker Madness Tournament.

Other than some controversy over seeding there weren't a lot of surprises to be had. Because there were only two possible teams playing in each game the results were pretty straight-forward.

This post, which will look at the Elite 8 through Championship rounds, is a bit more thought provoking. If anything, I hope it helps illustrate why even when there are just a couple of dominant teams in a large tournament the final rounds almost always contain some pretty surprising entrants. I think it's also useful to think about what the right tournament field for a college football tournament should be.

Note: The percentage next to the teams below indicates the percentage of model runs that a team advanced to that round. So to advance to the Elite 8 a team must win 2 games.

The model loves 1995 and 1983, and they continue to dominate the field, advancing to the Final Four 59% and 45% of the time. 1996 seems to want to play the Cinderella of the tournament, knocking #1 1994 out of the tournament by a narrow margin to advance. Region 4 appears to be have the greatest top to bottom parity with the top three teams by percentage of Final Four appearance much more closely grouped than any other region.

Looking at the most common mix of Final Four teams, one can't help but be struck by how unlikely any particular mix of teams is. 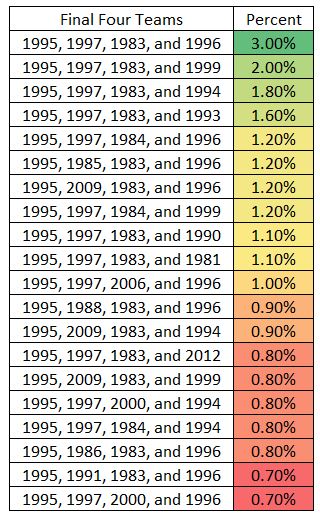 The right side of the bracket shows that it has more parity than the left. The left side, Regions 1 and 2, have only five teams in the championship game accounting for 80% of appearances. The right side needs seven teams to reach the 80% level. At this point the cumulative effect of probability mathematics really begins to show. Does anyone really believe that 2011 should be considered one of the two best Husker teams of the last 32 years? No, but eventually, when you play enough games, something completely bizarre and unfathomable happens.

Here's the most common matchups in the Championship Game. 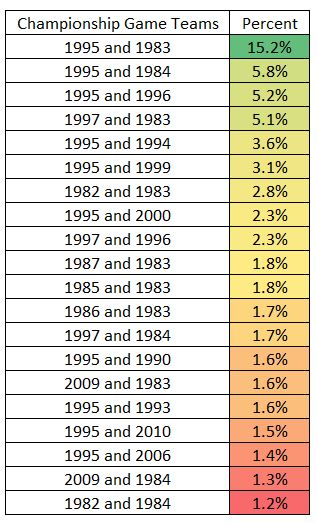 I'm a big proponent of a college football championship tournament. I firmly believe that the only real way to determine a champion is to have the best teams play each other. However, this little exercise reinforces one very important thing:

As the size of the tournament field increases, the probability of any given team winning, dominant #1 or not, decreases dramatically.

Every game is another chance to fall.

If I take just the 4 #1 seeds and start the tournament at the Final Four round, the differences in probability of winning the championships are apparent. 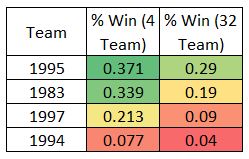 The flip side of this is that in the 32-team tournament, there were four other teams who won it all more frequently than 1994 who would never have gotten the chance to compete for the championship in a 4-team tournament.

Remember this when the inevitable discussion of expanding the football tournament field comes up.