2016 Big Ten Schedules: What Parity Schedules May Look Like

What might the future of Big Ten schedules look like as the conference moves to "parity scheduling" and a nine-game conference schedule?

With the new Big Ten divisions set for football, now is the time to start thinking about what the schedules will look like. In 2014/2015, the Big Ten will play eight conference games (six teams from our division and two cross-over games). Come 2016, that will change. There will be nine-game conference schedules with three cross-over games.

I decided to sit down and hammer out what the schedules might look like, using the following criteria:

Purdue and Indiana have the only protected cross-over game.

Attempt to play every school in the opposite division at least once during a four year period.

Integrated one version of a "parity based" scheduling concept as outlined by Jim Delany:

Delany: The strong majority view was that we not have assigned crossovers, so we could play each other as much as we could over a long period of time. Obviously, Indiana and Purdue have the Bucket game, it's historic and we wanted to preserve that. It made Purdue comfortable going West, Indiana comfortable going East and it preserved that tradition.

An awful lot of our rivalries could be taken care of through divisional play. If you look at the schedules, what you'll see is over time, the crossovers rotate. In the first 18 years, you're going to see a lot of competition between teams at the top of either division. We call that a bit of parity-based scheduling.

You'll see Wisconsin and Nebraska and Iowa playing a lot of competition against Penn State, Ohio State and Michigan. But it will eventually rotate. BTN did some surveys. We didn't rely on them but we followed the results. We had 62,000 people who participated. By and large, this aligns with what we think is fan-friendly in terms of regionalization, protection of rivals and so on. About 80 percent of fans were supportive of nine or 10 games.

Delany states that it will be an 18-year cycle. I can do it in 12. Making this schedule wasn't as difficult as it seemed. I started off with defining how parity should be done. Mr. Delany is quoted as saying he wants to see Nebraska, Iowa, and Wisconsin play Michigan, Ohio State and Penn State more. With that information I decided to start making groups of scheduling partners. You may want to click on this image to get a bigger copy of it (right click + open in new window). 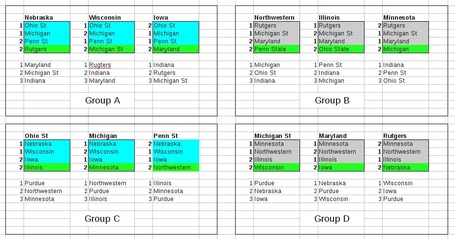 So what am I doing with this? As you can see, I created four groups of three teams. Purdue and Indiana are different because of their protected game and so they are excluded right now. Each school has a group of four teams that they are assigned to. The first three schools (light blue) are assigned based on what Jim Delany stated. Michigan, Ohio State and Penn State all get Nebraska, Iowa and Wisconsin. The opposite is also true. The other three schools from each division get each other (Michigan State, Maryland and Rutgers get Northwestern, Illinois and Minnesota). To make schedule rotations easier, each school also gets one school from the other pod (green). The choices I made were based upon the following criteria:

Preserving Illibuck as much as possible.

Preserving the Little Brown Jug as much as possible.

To a lesser extent, getting Penn State into Chicago and Nebraska into New York City (expansion is all about TV bucks right?)

The remaining three schools from the other division (including Indiana and Purdue) were placed below each schools "group of four" pod.

Comparing the two, you can see Michigan and Ohio State are home-and-away the first two years, while Penn State and Rutgers are home-and-away years three and four. Maryland, Michigan State, and Indiana rotate through a six year cycle. This works for the non-Indiana schools very well. When we include them, they will rotate two schools every year and will complete a home-and-home cycle with all cross division opponents in six years. Using this method, you can come up with the following cross over games for each school for the first six years. The next six years continue on the same path and you complete the cycle after 12 years. 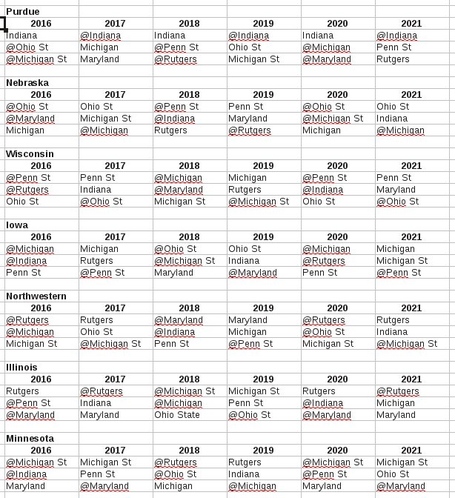 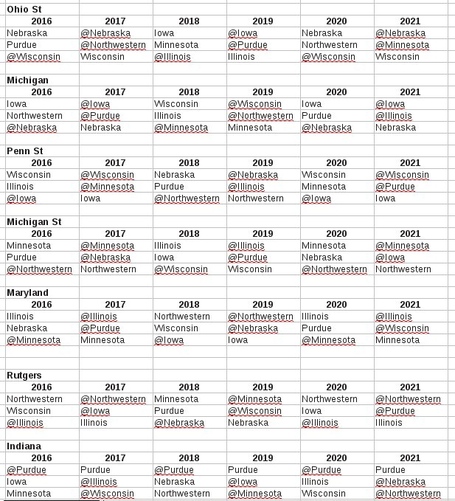 Completing the schedules is very easy. Within your division, you play 6 games, 3 at home and 3 on the road. Pick your poison and then rotate them the next year. You will come up with something similar to these schedules:

NOTE: These are not the schedules for the following years. These are an example; a projection of what they might look like.

Are they fair? No. They are designed with the criteria that Big Ten Commissioner Jim Delany set forth. I think it will help the weaker schools in the long run develop their programs and will help the stronger schools with their strength of schedule when the playoffs come around. Again, this is what I came up with. It is not set in stone. Delany mentions an 18-year cycle so it sounds they may already have a plan in place.

What do you think about this so called parity based scheduling?