The Husker Madness Tournament: 32 Nebraska Teams Play Each Other For The Title

What if all the Husker teams for the last 32 years played each other in a tournament? How many times would the 95 team win?

Share All sharing options for: The Husker Madness Tournament: 32 Nebraska Teams Play Each Other For The Title

Ah, the off-season. That long, dark tea-time of the soul between Spring Football and Fall Camp. The time that football writers' minds are clouded with panic that they will run out of things to write about.

This rookie writer is no different. Fortunately, as a rookie Nebraska football writer I can always fall back on the one thing that interests every Nebraska fan...the 90s.

Most Husker fans...okay...most every college football fan, agree that the 1995 Huskers were the best college football team of all-time. They ran through their opponents like Mark Mangino through a Golden Corral. They put an epic beatdown on the Florida Gators to win back-to-back national championships.

How do those 95 Huskers compare to say the 94, 97, or 83 Huskers? Again, most agree that they were better, but how much better? Other than gut instinct and fervent argument, is there a way to know?

That's a question that can never be answered objectively. Like any kind of history, the 'facts' are simply assemblages of the most compelling arguments and evidence. There's no way to empirically prove anything in the past. But there are ways to inject some objectivity into the discussion.

One such way is to create a model to simulate the games. If the inputs into a model are reasonable (and I think these are), then the results should be reasonable, and should at least add some useful information to the discussion.

Over at Football Study Hall I'll be publishing the results of my weekly season model. That model aims to predict the final win total of all FBS teams. The primary inputs are scoring offense and scoring defense; the two statistics most closely correlated to probability of winning or losing. It only took a bit of work adapt the model to simulate 1000 games between every Husker team of the last 32 years (1981-2012).

After computing win percentages for all other teams using the same methodology we have everything needed to put together a simulated March Madness-style tournament involving every Husker teams from the past 32 years. 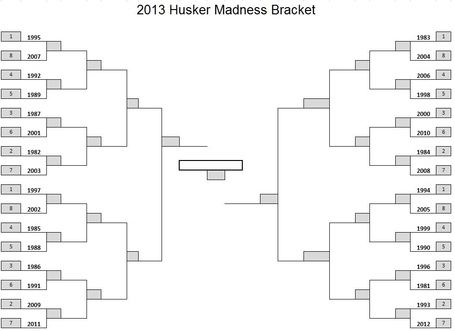 Seeds were primarily determined mathematically, with some subjective input from Husker fans who replied to my post on HuskerMax.com asking for opinions on the seeding. Regardless, because the model doesn't use seeding as part of the probability of win, seeding doesn't matter...much. What does matter is the other teams in a region. Not unlike the West Region in this year's March Madness tournament, an unusually difficult or weak region can lead to some surprising results in a tournament format. I tried to balance the regions, but that's always a subjective, and often unsuccessful, activity.

Since there's only two possible teams that can play in each first round game, the next graphic just shows the teams that advanced to the Sweet 16. The box next to each team in the Sweet 16 round is the percentage of games (of 1000) that the team won during the simulation. Subsequent rounds will show more than 1 team advancing in each game. 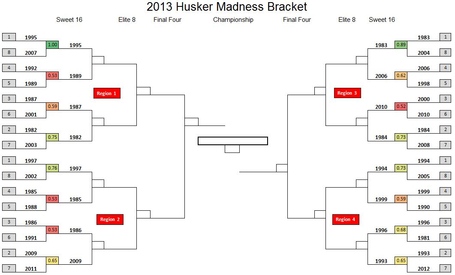 In the next post I'll look at the next two rounds and the make up of the Final Four.