Nebraska begins play in the 2013 Women's College World Series today at 11:00 am against the Washington Huskies. It is

The Nebraska softball team is set to begin play in the 2013 Women's College World Series starting today at 11:00 am central. They'll start the tourney by taking on the Washington Huskies. The Huskers are the lowest seed remaining in the tourney, but earned their way into the College World Series by sweeping their regional in Lincoln and beating #3 Oregon in Eugene, snapping the Ducks' 24-game home winning streak.

Eight teams make up the double elimination format with the games being played in Oklahoma City at the ASA Hall of Fame Stadium. The stadium seats 7,300.

It is Nebraska's first trip to the College World Series since 2002, seventh overall, and third under head coach Rhonda Revelle.

The team is lead by junior Tatum Edwards, who was named a second-team All-American earlier this week by the National Fastpitch Coaches Association. Edwards is a pitcher with a record of 30-9, an ERA of 1.81 and has thrown 30 complete games in 34 starts.

An interactive bracket for the tourney is available at NCAA.com and the initial CWS bracket is here (click to embiggen): 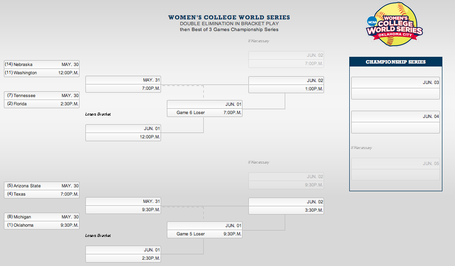 Today's Nebraska game vs Washington will be televised on ESPN2. All of the games throughout the tourney will be broadcast on ESPN or ESPN2.