The 2013 Big Ten Baseball tournament starts Wednesday at Target Field in Minneapolis. Indiana and Ohio State earned the #1 and #2 seeds, getting a bye in the first round. Minnesota will face Illinois to start the tourney, while Nebraska will play Michigan in game two.

The 2013 Big Ten Baseball Tournament starts this Wednesday at Target Field in Minneapolis, home of the Minnesota Twins.

Indiana won the Big Ten regular season title, their first since 1949, and with that they earn the #1 seed and a bye in the first round. The Hoosiers finished with a 17-7 conference record.

Ohio State also wins a bye in the first round as the #2 seed. Ohio State finished the season tied with Nebraska at 15-9, but earned the #2 seed by winning their series over the Huskers and thereby earning the tiebreaker.

Minnesota earned the #4 seed and will take on #5 seed Illinois in the first game of the tourney on Wednesday at 12:05 PM CT.

Nebraska and #6 seed Michigan will play following game one with a start time of 3:35 PM.

The first two games of the series have teams that just finished playing a series against each other as Illinois won their series against Minnesota and Michigan won against Nebraska in an embarrassing fashion as the Huskers gave lost the final game in the series 19-9.

Indiana and Ohio State will begin play on Thursday and will face the winners of Wednesday's games.

All games will be broadcast live on BTN. 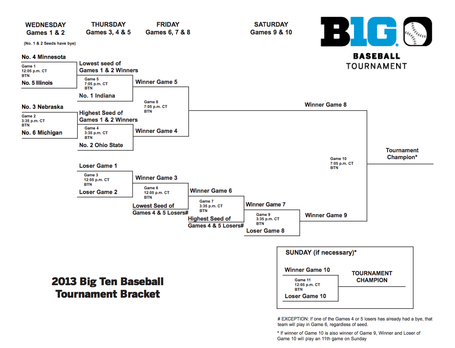