The Husker Harlem Shake? Cobby breaks this down.

The CN staff sent me the Husker Harlem Shake. I break it down with my precision.

Share All sharing options for: The Husker Harlem Shake? Cobby breaks this down.

So, there I was, planning my summer trip to central Asia to find the secret to special Mint Gelato when Jon and Husker Mike sent this video to me via secret pager on my Nokia cell phone.

OH THIS DEBAUCHERY. TIME TO BREAK IT DOWN.

Lets do the first scene, by golly. 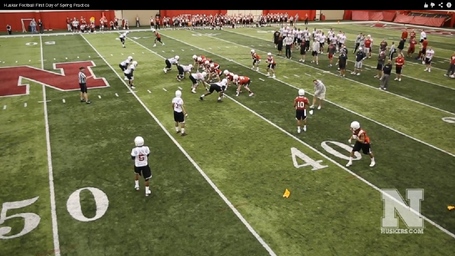 - Bo spiked his hat. In this, we learn that the AD's marketing department should really be targeting Rogaine as a proud sponsor of Husker football.

- And HEY! NOBODY FLINCHED ON EITHER THE OFFENSIVE OR DEFENSIVE LINE! Let's have the PA announcer play some Baauer before every play! We'll go all Arena League on the Big Ten!

- WHO IS THAT GROUP UP TOP. CAN'T THESE WALK ON'S DO SOMETHING LIKE SHOVEL SNOW OUT OF HAYMARKET PARK? 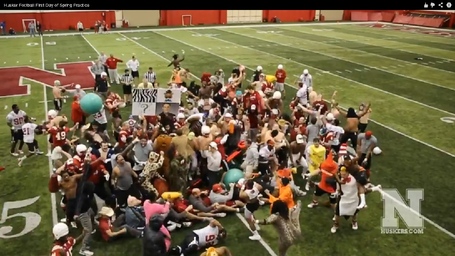 GOLLY GEE GOODNESS. WHAT CAN WE FIND HERE.

- I was right about Bo and Rogaine.

- THAT ROWBOAT IN FRONT OF THE DANCING. WHERE ARE YOU GOING IN LAND LOCKED LINCOLN NEBRASKA?!?!

- What is Taylor and RK3 doing with that sign? And who is on that sign? I got a zebra, a question mark, Mr. Potato Head, and.... who else? I mean, if that's one that wants you to get hit to force a penalty, it could be Ed Cunningham I guess YEP, WENT THERE.

- There is a leopard doing unmentionables to a tackling dummy while someone in a dog's uniform dancing next to him. WHERE IS THIS A NORMAL THING TO DO? AND WHO LET CARL BACK INTO LINCOLN???

- Hey look more officials looking away as debauchery is going on. Must be Big 12 refs.

- MORE PAD ABUSE ON THE LEFT SIDE. PAD SAFETY ACTIVISTS HAVE TO BE RAGING OVER THIS.

- If this isn't as sure a sign to that Eichurst guy, what's his name, Shane? Doesn't matter. If this isn't a sign that this program has fallen into mediocrity, I don't know what is!?!? What more does this man need to see to make some changes around here?!

- What time is it? Holy crap, I gotta go. My plane for Asia leaves in 45 minutes! I'll let my buddy Harvey tell y'all what's up.