From Bubbasan's kitchen, we bring you an agricultural homage to Thomas Jefferson.

As promised, I've finally gotten around to taking your recipes and actually cooking them and documenting that process. In a vote provided during a game thread earlier in the off-season, the vote was split between Bubbasan's "Smokehouse Macaroni and Cheese" and Uglydog56's "Sweet ‘N Spicy Meatloaf" as the first dish.

This meant it was chef's choice so congratulations to Bubbasan!

How better to celebrate the start of this off-season series than by celebrating our future divisional roommate Wisconsin's Big Ten successes with that truly American dish, macaroni and cheese!

According to Wikipedia, you can thank Thomas Jefferson for importing macaroni from Europe. He was apparently so smitten with the noodle that he imported the machinery for making the noodles. Of course, the machine went the way of a January treadmill - that is, it went unused and Jefferson continued importing from Europe. Fascinating!

So let’s get started. As requested, Bubbasan provided a list of ingredients (It’s quite robust!): 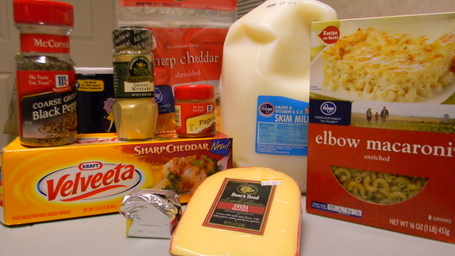 But seriously – So much cheese. Also, Velveeta? Not what I expected! I'm not really sure what I expected but this is the first time I’ve ever cooked with it. 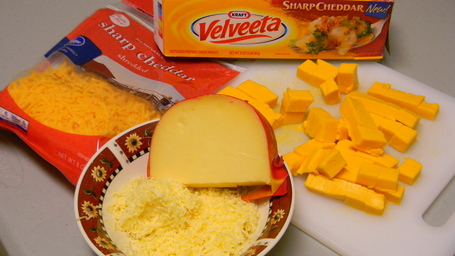 (And really, does anything say Big Ten more than Velveeta.)

As far as pots and pans go, I ended up using a medium saucepan, a large pot and a 13 x 9 glass pan, greased with butter.

Let's take a moment to learn a little about the star ingredient of this dish.

VELVEETA
Velveeta is the brand name of a processed cheese product having a taste that is identified as a type of American cheese with a texture that is softer and smoother. It was first made in 1918 by Swiss immigrant Emil Frey of the Monroe Cheese Company in Monroe, New York. In 1923, The Velveeta Cheese Company was incorporated as a separate company, and was sold to Kraft Foods in 1927. The product was advertised for its nutrition.[1] According to Kraft's website, in the 1930s, Velveeta became the first cheese product to gain the American Medical Association's seal of approval.[2] It was reformulated in 1953 as a cheese spread.[2] Velveeta is labeled in the United States as a "Pasteurized Prepared Cheese Product" (see processed cheese). The name 'Velveeta' is intended to connote a velvety smooth edible product. Smoothness and meltability are promoted as its iconic properties that result by reincorporating the whey with the curd. (Source: Wikipedia.org)

No, wait, not that one. Sorry about that.

SMOKED GOUDA
Gouda, or "How-da" as the locals say, is a Dutch cheese named after the city of Gouda in the Netherlands. If truth be told, it is one of the most popular cheeses in the world, accounting for 50 to 60 percent of the world's cheese consumption. Smoked Gouda is a variant of this famous cheese wherein it is smoked in ancient brick ovens over flaming hickory chip embers. Sensational with beer, this hard cheese has an edible, brown rind and a creamy, yellow interior. It can also perfectly complement tasty snacks like fruits, nuts and dark chocolate. It forms a good combination with sandwiches and burgers. (From Cheese.com)

Hard to tell the difference, right?

Anyways, once you've scrounged the prairie or, if you're not feeling adventurous, the local grocery, get back home and throw all of these ingredients on the counter. And then set your oven to 375 F. (Very important that this is in Fahrenheit - a similar temperature on the Celsius scale or in units Kelvin would have very different results.)

You're going to cook the box of pasta as directed by the purveyor. (If you're really adventurous, you could make the noodles from scratch. If you accomplish this, congratulations! You've out-done the 3rd president of the United States!)

In large saucepan, melt butter over low heat. Stir in flour, salt, mustard and pepper until smooth; take off heat. 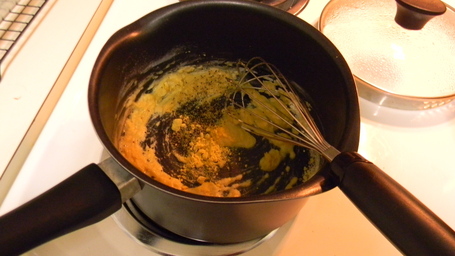 Little by little, stir in milk until smooth. Stir constantly for 10 minutes on heat until thick; take off heat. Stir in 1 1/2 cups Cheddar cheese, Velveeta cheese and smoked gouda cheese until melted. 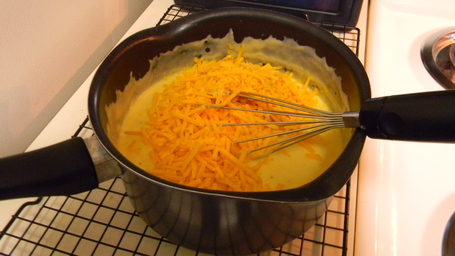 This is fairly straightforward so go ahead and do that. It smells fantastic, if you like melted cheese.

Now all that's left is to fill the 13 x 9 pan with the cooked noodles and then to cover the whole thing with your melted cheese mixture. Sprinkle the rest of the cheddar cheese and paprika to taste. 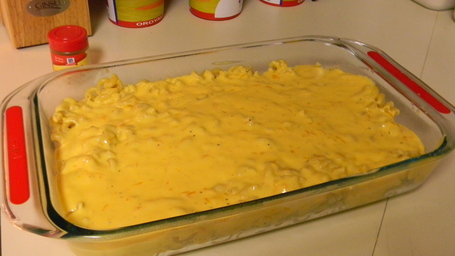 Then just bake it for 20 minutes until the cheese forms a nice layer of baked goodness. 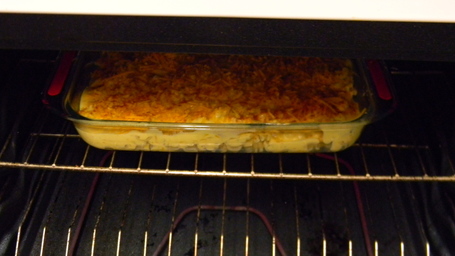 Partner up the mac and cheese with a nice chicken sausage and a salad, and enjoy! 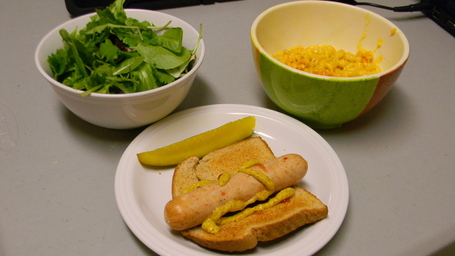 All in all, from prep to finish, this took about an hour. And it was well-worth it. Not only was it an excellent mac n' cheese, but it also sits well. (When I made this, it made enough for about ten meals worth.) So for those of you on a budget or a frequent flyer in the leftover department, consider adding this dish to your repertoire.

Again, thanks to Bubbasan for his contribution. It was fantastic. Join us next Thursday as we'll cook our second dish, Uglydog56's Sweet N' Spicy Meatloaf.

Don't forget that you too can have your dish featured right here on the front page at Corn Nation. Publish your recipe in the FanPosts section under the CN Cookbook title! We're always looking for new recipes to try.