Tim Miles On TV During The Postseason? Why Not?

Next year and the year after starts now, and putting Coach Miles on TV to both show his personality and get Nebrasketball on the rise for the open of the Pinnacle Bank Arena can't hurt.

Share All sharing options for: Tim Miles On TV During The Postseason? Why Not?

I have to admit that I'm not much of a NCAA Tourney guy at all. Maybe it's because Nebrasketball hasn't been much of anything for the Nebraska basketball program (well, more than Northwestern THAT'S RIGHT COME AT ME BRO). That being said, I am going to watch because it's much better than watching things like spring training baseball that needs to end so the season can get going already.

The slapfights we were subjected to on both CBS and ESPN all weekend before (and after) the brackets were announced have made me just wanna manscape my eyebrows with a grapefruit spoon. People like Tom Lunardi, Greg Anthony, Digger Phelps and Wally Szczerbiak are trying to tell me who's the last 4 in and on the bubble and such. Honestly, to me, TV like this is just boring as hell, which, oddly enough, I think of the same thing about the BCS show and "who should be in and out" rhetoric there too.

Lord, let's not forget the role of Doug Gottlieb in all of this. The less of Gottlieb there is, the better off a red blooded American is. I mean, this is good TV?

And then, a strange thought came to mind.... TIM MILES IN THE STUDIO. Follow me here...

Yes, Nebraska isn't a good program. We get that and have for a while THANKS FOR THE REMINDER DAN WOLKEN. However, Miles is all about getting this program on the front page of NCAA Basketball somehow, someway. CBS needs a extra guy? Miles can fill in well with banter. ESPN needs a NIT studio dude or even a color guy? Why not Tim? The tweets alone for doing it would be worth it in itself.

Not only could it help show that Miles is willing to do the extra to get himself out there, fans and potential recruits can get behind the honesty that Miles gives to everything he's done in the almost year he's been in the Hendricks Center. Let us all be very honest here, if there's anyone that can be a happy guy that his team won only five games in the B1G (because no one thought he'd get more than 2, unless you count his mom), it's Timmy Miles.

This program is going places, and I don't think you can find a guy who thinks Miles did a bad job at all in his first season in Lincoln. Having a record near .500 and making it to Friday in the Big Ten Tourney alone with the roster that was inherited from Doc Sadler, one could imagine what Tim can do with a real recruiting strategy and a spit shined new arena in Lincoln's Haymarket.

Well, I suppose there could be one guy who isn't impressed with what Miles did, I guess. 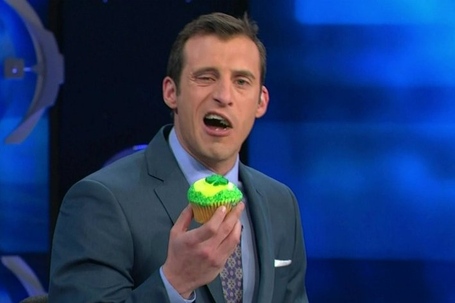