College Football Recruiting: Where Does the Huskers' Class Rank in the Big Ten?

is Nebraska part of the wheat or the chaff?

Share All sharing options for: College Football Recruiting: Where Does the Huskers' Class Rank in the Big Ten?

National Signing Day has come and gone. For many, that means taking a break from the recruiting roller coaster, kicking back and relaxing. Not me, though.

Not only am I going to review Nebraska's haul, but how the entire Big Ten conference made out to help paint a picture of the conference's future. Well, most of it anyway. Not everyone gets to stick around.

To eliminate as many biases and as much of the human element as possible, I'm going to use the laser microscope of team recruiting rankings produced by Dave Bartoo's College Football Matrix. He uses the four major services to determine a team's ranking. 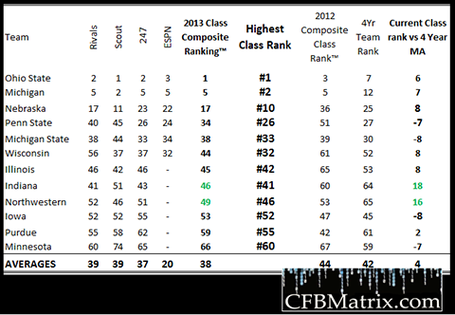 Let's go a step further with the Huskers and see where they stand during their short stay in the Big Ten. 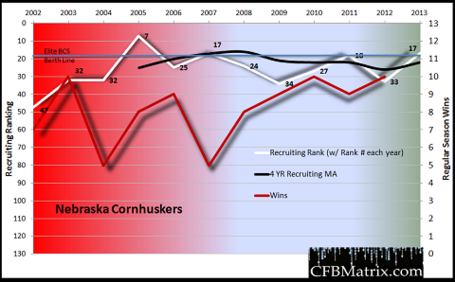 While the 2013 class is the best under Bo Pelini's watch, last year's crop is a potential issue if non-contributors aren't shown the door and classes of the same quality, if not better, aren't brought in.

The rating that stands out most is Penn State's. Raise your hand if you thought the Nittany Lions would be ranked in the top six Big Ten recruiting classes considering what the school's been through. If this isn't a testament to Bill O'Brien's abilities, I don't know what is.

Wisconsin sits somewhat low, but the difference between the Badgers and those ranked higher is they have traditionally been able to get the most out of their talent. With a brand new staff, we'll see if that carries over.

With essentially all major recruiting restrictions being repealed, this is when Pelini and his staff needs to be in close contact with new athletic director Shawn Eichorst regarding what they need to remain competitive in these rankings.

I guarantee you Urban Meyer and Brady Hoke are already prepping to determine how they're going to stiff arm the vast majority of competition for recruits they want.

Last Wednesday was a good step forward for Nebraska football. With one Junior Day already in the books as of last January, Husker fans should consider the Ross Els' proactive behavior to be a refreshing change of pace.

If such tenacity can be kept up staff-wide for the remainder of the 2014 cycle, there is no reason Nebraska shouldn't be eyeing a top ten finish next February.

What are your thoughts on where Nebraska's recruiting sits in the Big Ten?