Hitting And Pitching Both Fail - Nebraska In Early Season Struggle

Huskers start 0-7 for the first time since World War II, can they bounce back?

Share All sharing options for: Hitting And Pitching Both Fail - Nebraska In Early Season Struggle

Nebraska Head Coach Darin Erstad said Nebraska was going to play a hard schedule. In fact, he might've known that it was going to be tough going, but the Husker Baseball team's 0-7 start is the worst since World War II. 'The Huskers will need to see rapid improvement if they want to attain their goals for the season. 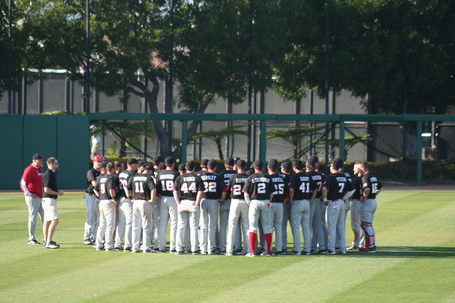 The schedule tilted the playing field since the start. With the sheer challenge of the lineup the Huskers were facing, a chance of an at-large spot in the NCAA tournament was slim at best. The Huskers 0-7 start makes that even less likely. But the Huskers still have the weak part of their schedule in conference play, and a chance to make noise there could still provide a successful season.

The Huskers have played seven games thus far, five of them coming against Top 25 teams. In those five games the Huskers lost by a combined score of 33-10. While that number looks crooked, Nebraska was more competitive than the lines made it appear. The final two losses came to Texas by a total of three runs, and the pitching seemed improved in Austin. Husker Hurlers only allowed 14 Texas runs in 3 games, and five of those came against two relievers in the final inning of Husker pitching in Friday's loss.

But statistics show a big drop-off from last year's surprisingly productive team. The pitching staff could certainly use staff ace sophomore Kyle Kubat, who was a Freshman All-American last season. Those are key innings that keep better pitchers on the mound for Nebraska. His return will be an instant improvement for the team, and should help lower the ERA.

Last season, Nebraska posted a 4.40 ERA and held opponents to a .291 hitting average. So far through seven games, Husker opponents have tagged Nebraska with a 7.90 ERA and have pounded the pitching to the tune of a .335 batting average and a .442 OBP.

But it's not just the pitching. The offense clearly misses junior outfielder Michael Pritchard. The First-Team All Big Ten player hit .387 last season and had a huge 25-game hitting streak to drive the Nebraska offense. Currently, only four Husker regulars are hitting over .300.

Even small things, like executing small ball, killed the offense in Austin. Nebraska attempted four sacrifice bunts in the 4-3 walk-off loss to Texas, two of those SAC bunts resulted in double plays. Unacceptable.

That said, the Huskers have faced an incredibly tough pitching lineup thus far. Both Texas and Cal State Fullerton rely on pitching as their team identities. Both schools managed to hold the Husker offense down. Nebraska's opening game against Cal State Bakersfield came against their ace, and the lone game against USC came against third-round draft pick Kyle Twomey.

The short-staffed Huskers took on a very tough lineup, and couldn't find a win. It won't last, and the Husker hitting should come around, and there does seem to be enough quality arms to get wins in a typical three-game weekend series.

But the damage to the team psyche and momentum is much harder to quantify. It calls into question Erstad's strategy of starting off with such a brutal schedule. Northern teams are already at a disadvantage, does it need to be that much more pronounced?

The Huskers have a great opportunity this weekend to right the ship. 2-4 New Mexico comes to the friendly confines of Hawks Field at Haymarket Park. The Lobos have already lost a game to B1G school Iowa (6-2 in 10 innings) but did notch a win against Oklahoma State. The Haymarket homestand and the big opportunity continues into the following week with two midweek games against Northern Colorado. The Huskers should be aiming to go 4-1 over the next week and get back to .333 with a 4-8 record.

As a competitor, Erstad won't want to admit he was wrong, or back down from the challenge of scheduling the best schools in college baseball. How much of that attitude has rubbed off on this team will be the key in seeing if they can bounce off the mat after an unimaginable start.