Darin Erstad wanted a strong schedule, he got more than his Huskers could handle in an 0-4 opening weekend.

Share All sharing options for: Nebraska Baseball Recap: Huskers Open season With a Thud in SoCal 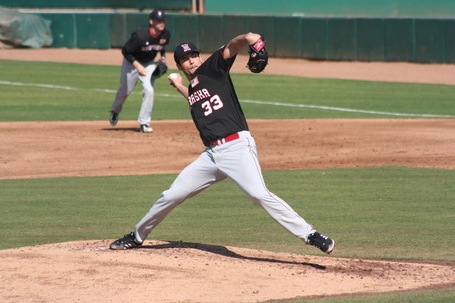 Nebraska finished a road trip to Southern California to open its 2013 baseball season without notching a win. Much like 2012, where the Huskers traveled to Phoenix and were swept in a three-game series by surprise team Gonzaga, Erstad's crew couldn't find a win in their opening weekend.

After Cal State Bakersfield pulled away in a 9-4 win, the Huskers dropped a double-header at #22 Cal State Fullerton, again lacking the pitching to hold down the Titans as they pulled away 10-5 in game one, and routed Nebraska 9-0 in game two.

USC, who had also played Cal State Bakersfield and Cal State Fullerton this weekend, also entered the game winless, and reeling after firing their head coach for NCAA violations relating to practice time. The Huskers offense was handcuffed early by true-freshman Kyle Twomey, a third-round draft pick who elected to go to school. After giving up a lead-off double to Pat Kelly, Twomey retired 12 of the next 13 Huskers he faced.

Nebraska finally broke open the game in the sixth inning, but also let Erstad reveal his youth in terms of coaching. Pat Kelly led off the sixth inning with a single to left field. The sacrifice bunt was laid down, but Sanguinetti earned a single when it wasn't fielded late, and still fair, by the catcher.

Then Erstad made a coaching mistake, with Chad Christensen, the team's best hitter and so far one of the top three hitters this season, got the bunt signal. He promptly popped the ball up to the catcher, and an errant throw to second prevented a sure doubling up of Pat Kelly. 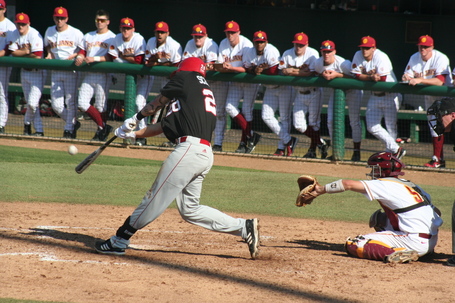 Erstad was bailed out, in some ways, by Kash Kalkowski's single, Josh Scheffert's sacrifice fly, and Tanner Lubach's single to drive in three runs. But the Huskers gave away an out with their best hitter against a laboring pitcher in his first collegiate game.

The second questionable call came later in the game. The Huskers entered the 9th inning nursing a 3-2 lead. Dylan Vogt, surely one of Nebraska's most reliable relievers, had pitched since the sixth inning and had only given up one run with three hits.

Nevertheless, juco transfer closer Josh Roeder was in the bullpen and warm, Erstad stuck with Vogt. Vogt delivered the first out, before allowing USC a single, a double, an intentional walk, a game-tying sacrifice fly, and a gaming winning walk-off single. Inexcusable with the guy you brought in to be the closer sitting in the bullpen.

Hindsight, of course, is 20/20, and Nebraska's skipper isn't totally to blame. The offensive output on the weekend was slow (as can be typical for Northern teams early in the season). The Huskers only average .241 as a team after four games. With only three regular starters, Kelly, Lubach and Christensen, hitting over .300 (all over .350).

The pitching staff left the most to be desired, ending the opening weekend with an 8.54 ERA, while the Huskers only averaged three earned runs a game on offense. That won't get it done. Still, there were some bright spots - Christian DeLeon pitched well against USC in his Husker debut, and staff ace Kyle Kubat didn't play this weekend, but is expected to return soon.

It's hard to know what to think or say exactly about this Nebraska team yet, just last year they opened the season without a win, before bouncing back strong in their second weekend. This time though the Huskers must travel to Austin to face Texas, so the second weekend may not be any easier than the first.