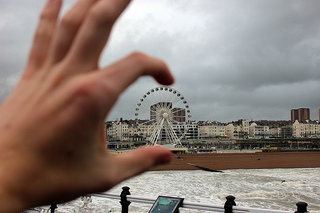 My grandfather used to put change in a small jar on top of his chest of drawers every single day. He'd have some leftover coins and he'd empty out his pocket into that jar for years. Being a small child, I never saw him do this...it wasn't until years later that I was able to understand what that jar was for and how it would affect me.

Fast forward to my high school graduation day. I walked into my dining room to look over the vast display of cake and ice cream to find a jar sitting on the table. I didn't recognize it as the same jar that sat atop my grandfather's chest of drawers and i had no idea if it had anything inside because I was quickly distracted into taking pictures with the family. Grandpa casually mentioned the jar on the table as being from him...and I had no idea what he had cooked up for me. My grandfather was a bit of a practical joker...he was an old corn farmer who had a million jokes and sayings. My mind raced at what it could be.

I started opening my gifts and cards after cake and ice cream had been ingested, finally resting my hand upon the mystery jar that I couldn't see inside. I opened the lid and peered in like a little kid opening up a gift from Santa on Christmas morning. Inside was 5 thousand dollars in rolled up $100 bills. Needless to say, I was flabbergasted.

I learned something that day...the lesson? Sometimes, you think you know something you don't. I thought the jar on the table was just a jar or a gag gift. It took me opening that jar up to remember what it was used for (my grandfather's loose change) and to appreciate what he had done for me. I had to change my perspective to see it for what it was...a massive undertaking he had started when I was just a small child.

I think Husker football can be the same. We sometimes forget why we're fans and get caught up in seeing things only a single way. We compare things unfairly and make mistakes in how we look at situations, wins and losses...when we should take a step back and look at things differently. Looking at things differently is often referred to as taking in a different perspective.

I've written about having the right perspective in the past when it comes to comparing Bo Pelini as a coach to other coaches here at Nebraska. It's important for fans to understand how to look at the tough job head coaches have when trying to win...but its also important to look at how the coaches get that job done when winning.

The Huskers are 8-4 right now and this year could have easily been much, much worse. The job the coaches have done to allow our players to succeed is nothing short of mind boggling. Don't believe me? Get a new perspective by looking at how Northwestern did this year...they lost 7 conference games before winning their last game at Illinois. What was the cause of this massive skid? Injuries.

After the Nebraska vs. Northwestern game, they had 20+ injuries to their team with 13 key players down for the count. Sound familiar? It should...Nebraska was playing the same song during this time with injuries. Somehow though, Nebraska kept winning while Northwestern did not. How is that?

The easy answer is that Nebraska has more overall athletic depth than Northwestern. This is something that I doubt many people would argue against just taking into account overall recruiting classes from the past 10 years. The hard answer is to admit to yourself that Nebraska had GOOD COACHING to thank for this success...no team that has poor coaching has depth behind starters that can step in and step up for the win. Whether we want to admit it or not, Nebraska's coaches prepared our backups and coached them splendidly for the task.

No matter how much you want to point your fingers at Nebraska's coaching, you cannot do it. They found ways to win and coached a decimated Husker offense all year long to a winning record. Nebraska could have just as easily had a year like Northwestern did...or completely folded after the UCLA or Minnesota losses...but they didn't. They continued to battle and continued to win.

To appreciate how far you've come, you have to look at how you got here. Nebraska is at 8-4 when they could have easily had 3 more losses and been sitting at 5-7. Our players play hard. They play with heart. They play with pride. They play for each other. This is because our coach teaches them how to do this. They wouldn't be able to win without him showing them HOW to win. There was another coach that taught this same concept. That coach was Tom Osborne.

If you want your Nebraska Cornhusker's to keep winning in seasons to come...it starts with you. It starts with the fan getting a different perspective and seeing how amazing it was that we didn't drop 3 more games than we did this year. It starts with the fans taking a step back and NOT holding Pelini's first 6 years to the same standard that TO's last 6 years set. It starts with fans realizing how much what they say and do reflects back on the players (listen here about that - at the 14:10 mark).

We need to give the players support so that when they are batter and broken, they have something larger than themselves to play for....and that is us and the state of Nebraska. I hope this post encourages you to stop and look at things with a different perspective.

This FanPost created by a registered user of Corn Nation.