The Big Ten needs bowl wins. Badly. The national image of the conference is one that was left behind years ago (70s, 80s, 90s, take your pick), and the only thing that's going to improve that image is coming up with non-conference wins.

Rather than doing a close examination of the teams (time for that later), I thought we'd use Massey's rating site to see what it predicts about the match ups. Massey's site is about statistics and probability (mathy stuff), but bowls games are won and lost based on emotion more than the rest of the season, i.e., who really wants to be there, which team will actually play to win instead of just being happy about being in a warm place with scantily clad young woman all over the place.

Massey's predictions and win probability are under each team's bowl game below. Of the seven bowls, only Minnesota, Wisconsin, and Ohio State are predicted to win, which would leave the Big Ten with a 3-4 record and sadness.

The good news is the Big Ten's payout of around $73.4M dollars, with $36M of that coming from the Rose Bowl. I guess that's why Jim Delany loves the place so much. Note that I used the NCAA's site for payout information.

This is a good match up for Minnesota, and Syracuse is just happy to be in this bowl game.
The Texas bowl is in Houston, though, and that... well, I wouldn't chose it. The best joke I ever heard about Houston came years ago when Houston made the Cotton Bowl, and the mayor of Dallas made the joke that "Half of those people from Houston will be eating at 7-11 and the other half will be robbing it." He had to apologize, of course.

Should Nebraska be here? Doesn't matter, does it? We're not.

The win probability on this one surprises me, but on second glance who knows what Michigan team will show up. You'd hope that this is one the Big Ten takes away.

I like this match up. A part of me would have liked to play an old Big 8/Big 12 foe, but there's nothing in it for Nebraska. If we won, everyone would have the attitude we should have. If we lost, it'd be disaster because OMG LOSE TO KANSAS STATE. Georgia at least is SEC.

Nebraska's low win probability percentage surprised me, but again, you're looking at Big Ten vs SEC. I'm not going to claim being a statistical wizard, but all ratings of this sort begin with some sort of seed, and that seed favors the SEC over everyone else. Maybe I'm just trying to make myself feel better.

Another Big Ten vs SEC matchup. Another one you'd like to think the Big Ten could steal, but again, Iowa's low win probability is a lot lower than I thought it would be.

Big Ten vs SEC again, but this time the Big Ten team is expected to win.

Count me amongst those that believe everyone has undervalued Michigan State's defense all season. Stanford is a strong opponent, and I still hate the idea that cold weather teams are traveling to a warm weather location to basically play a team on its home soil. The Rose Bowl is a joke, always has been. But, oh, there's a shitload of money involved!

Ohio State, one loss only when it counted most. Will they want to exact revenge on Clemson to make up for it, or will they just trudge into the game and add more disappointment to an already disappointing season. Right now, Ohio State carries the "name" of the conference more than anyone. Big Ten fans damned well better hope they show up. 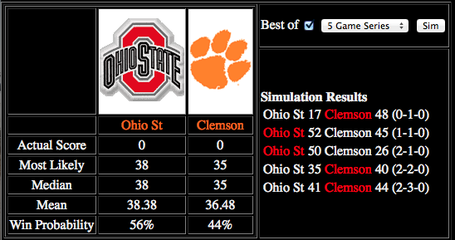