We take two beloved Nebraska dishes and combine them into one wonderful tribute to Nebraska.

Share All sharing options for: Cookin' Along the Ol' Salt Creek: Cinnamon Roll and Chili Bierock

Happy Thanksgiving! The staff here at CN would like to take a moment to thank you for helping make our community great. We know you have a lot of options for coverage of Nebraska sports and we're glad you stop by to share your time with us. As a thank you, I've got a special edition of "Cookin' Along the Ol' Salt Creek".

Today's dish was actually dreamed up during the Michigan State game, from an innocent conversation with Brandon Vogel of Hail Varsity.

@tamattes No, just a regular cinnamon roll, but that's genius. Been trying to think of a way to combine chili/cinn. roll into one dish.

But sometimes life is just funny. For instance, yesterday's Cornflakes discussed the wonders of cinnamon rolls and chili. Which gave us this tweet from Husker Mike:

I'm not sure why people from a state where the haute cuisine is loose ground beef served on a bun ridicules chili and cinnamon rolls.

I suspect he's talking about Iowa's Made Rite sandwiches, but you could make the same noise about Runzas.

Which brings us to today's food challenge: take the famous cinnamon roll and chili dish and combine them into a Runza-style sandwich.

But first, a confession: until recently, I was not aware that the cinnamon roll and chili dish was a thing. I will chalk this up to my naivete when it comes to all things Nebraska. (Next, I'm going to find out kilts are required wear at Carhenge.)

So after some brief Google-based research, I was ready to go.

Now, the typical bierock involves two components: the dough and the filling. I don't think it takes much to guess how we'll approach the food challenge.

So first we'll make the chili dough for the sandwich. KIDDING. Ha, had you going for a second there.

No, no. We want to make the chili first though. We need the chili to cool before we cook with it. Through the miracle of INTERNET MAGIC, my chili is already made.

But here's the recipe:

Start to cook the onions and mushrooms to remove the bitterness from the onions. I like to throw in some butter. Empty this into pot. Start browning your ground meat. Into the pot, add the remaining canned ingredients and mix. Add the browned meat. (Drain if you'd like.) Add seasonings and a tablespoon or so of honey to the mix. Heat over high heat to boiling, and then set to low for 10-20 minutes.

So now you let that cool down. Maybe have some for dinner, let it cool, refrigerate and we can make the dough tomorrow. We'll wait.

Is it cool now? GOOD. Let's move forward and make the dough!

I used the recipe posted by the Bumbling Chef. I left out the frosting as I understand that's not part of this dish.

I followed their directions to prepare the dough and the filling.

Filling: Make sure butter is softened well. Mix with brown sugar and cinnamon. 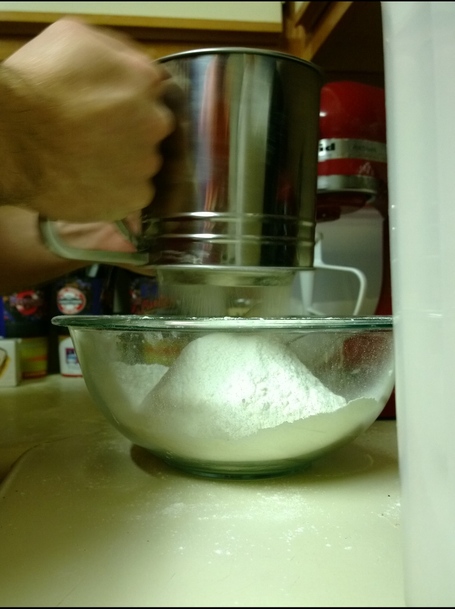 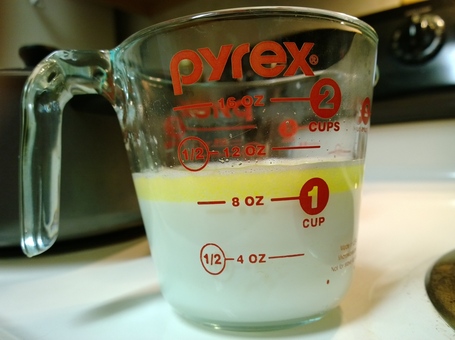 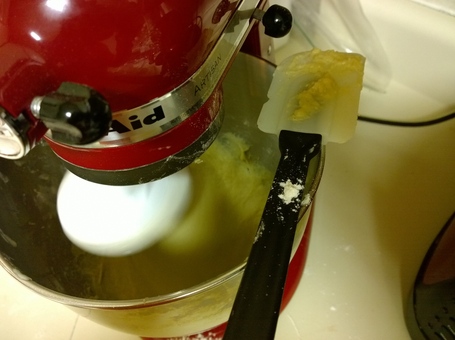 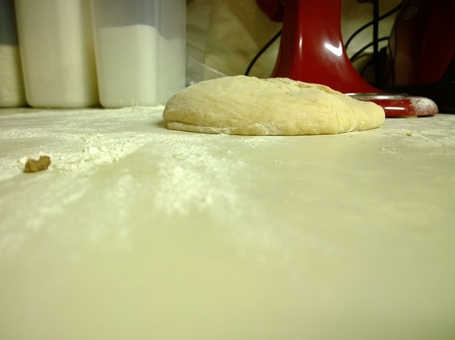 Alright, so let's build some sandwiches. First things first, roll out your kneaded dough. (Rolling pin, wine bottle, baseball bat...) You may have to divide it to make it easier to work with. My advice ends there. I'm incredibly terrible at this part. My bierocks always have different sizes. 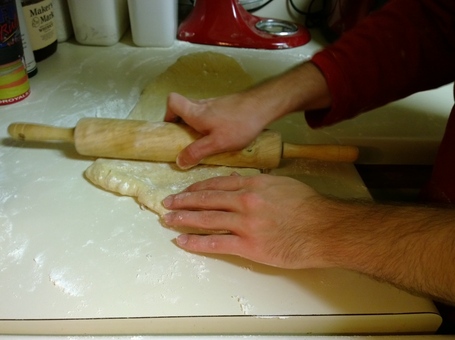 So once you have your dough rolled out, go ahead and cut them up. Again, don't trust my advice. (If you have suggestions, please share below!) Basically, you should aim for somewhat even-sized sandwiches that you can easily enclose the fillings.

To add the filling, first spread the cinnamon-sugar mixture on the dough and then add a spoonful of the chili. 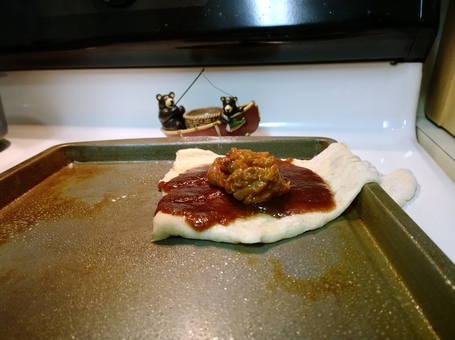 Then close up the sandwiches by either using a second piece of dough or by rolling half of the dough over the filling. Crimp the edges. 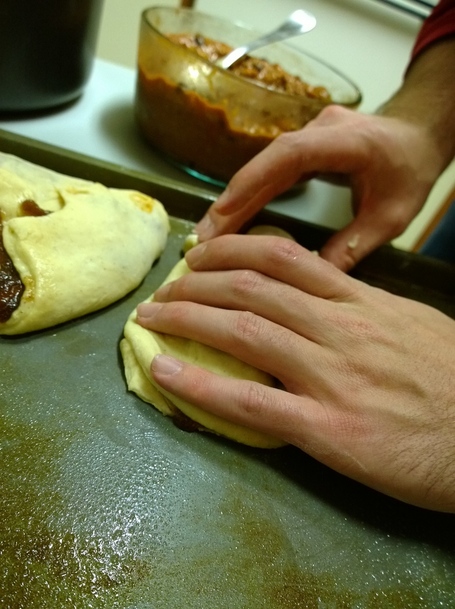 Anyways, finally take the dough and if you want, let them rise a little more. I've learned that this is probably not a good idea. 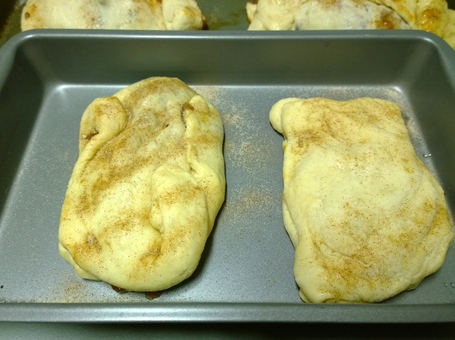 Toss them into the oven at 350 degrees Fahrenheit for about 15-20 minutes until sufficiently golden. 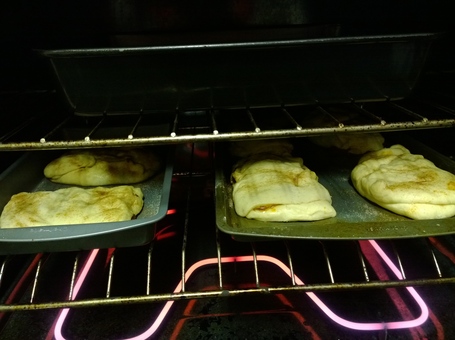 Pull out and plate and then enjoy! 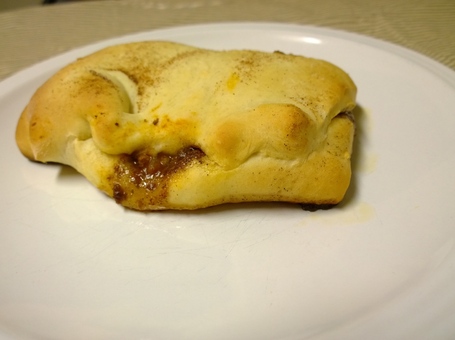 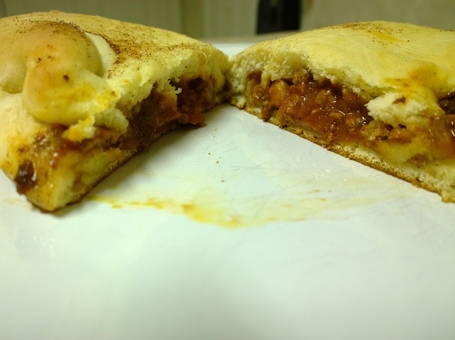 And I wasn't kidding - I'm really terrible at rolling out these sandwiches. Here are some normal bierocks I made from some simple bread dough. 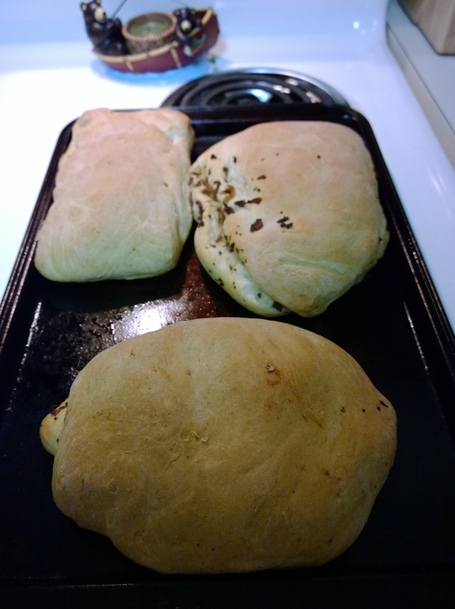 Now, an honest review of this dish: I am not a fan. Count me as one of those people who does not like this flavor combination. I found it overwhelmingly sweet. But if you like this combination? I imagine this may be something you'd like to try.

Have a happy Thanksgiving, everyone!