Nebraska plays Michigan State at 2:30 pm on ABC or ESPN2. The coverage map below will tell you on what channel you can find the game.

Most of the country will be getting the Nebraska - Michigan State game, shown in yellow. That's because most of the country loves this match up, and it will probably determine whomever wins the West Division in the Big Ten.

Michigan State leads the West Division with a 5-0 record. The Spartans are 8-1 overall, their sole loss on the season came early to Notre Dame. Nebraska comes in one game behind at 4-1, with an overall record of 7-2. The Huskers lost 41-21 to UCLA and 34-23 to Minnesota.

Michigan State has the number one defense in the nation.

The green area below will be getting the Syracuse vs Florida State game on ABC, while Nebraska vs Michigan State will be available on ESPN2. 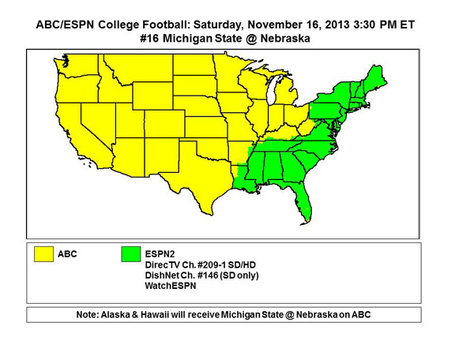