It's another Nebraska home game and another opportunity to complain about the student section. What are the problems and some possible solutions?

Share All sharing options for: Another Nebraska Home Game - Another Opportunity To Complain About The Student Section

Nebraska faces Northwestern in Lincoln this weekend. You know what that means? We can all complain about the Husker student section again. Nebraska media folks on twitter are good at trolling about the subject. Comments typically running like this - All those empty seats. All those tickets unused. That blank spot in the stadium. It's embarrassing. Those students don't know how good they got it.

Solutions to the problem typically involve some sort of beating:

- Take away their tickets completely, there are plenty of other fans who want them!

- They should sell or give their tickets to someone who wants them?

- They could institute a strikes policy for students who don't use their tickets. Georgia has this and basically, three strikes and you can't buy student season tickets for two years. The students can return tickets they don't use to not be penalized. The university then either gives those tickets to another student or sells them to the general public.

Complaining about the student section is a pet peeve of mine. I don't understand... well, yes, I do. It's easy to complain about students. They're young. They're stupid relative to the ways of the world. They don't know how good they got it. If they only realized what a prize they've been given, they're taking football for granted and on and on.

Student attendance at games is a problem all over the nation, not just at Nebraska. The Wall Street Journal recently did a piece about Georgia, where "Georgia students left empty 39% of their designated sections of Sanford Stadium over the last four seasons".

LSU had overall attendance problems for the Florida game, but an article about the student section said "LSU's student section had several almost empty sections. My sources (OK, my daughter who goes to LSU) said she and many of her friends skipped the game to study for midterms that started Monday." Imagine that, students being students.

Michigan, apparently tired of a nearly empty student section before kickoff, only this year implemented general admission seating for students. It hasn't helped.

Alabama's Nick Saban recently made an issue of fans staying throughout the game, and the University of Alabama responded by removing reserved section seating for many university student groups.

Student section attendance doesn't appear to be a problem at marquee games, which is illustrated in David McGee's photo from the UCLA game, the main photo for this article. Attendance at the South Dakota State game has those empty holes. This is where the "they should give their tickets away if they're not going to use them" argument comes in. 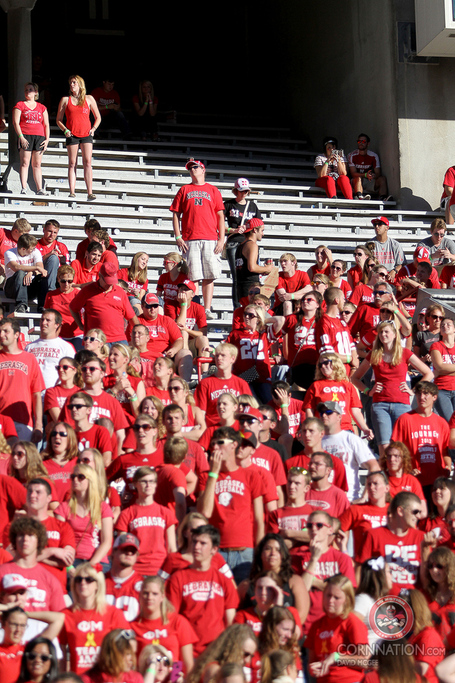 Unfortunately, it's not that easy to give away or sell a student ticket. When I was a student back in the 80s, we only needed a ticket stub and a student ID (maybe we didn't even need the ID). If there were students who were too drunk to go at a tailgate, we grabbed their ticket and gave them to someone else. If alums have the same issue, they do the same thing.

The problem today is that it's darned difficult to transfer a student ticket. I had a student send me the policy for transferring or selling a ticket, and it is included at the bottom of this article.

Another current student pointed out that because of general admission, they had to arrive at the stadium early to get good seats. They arrived seven hours early for the UCLA game, and there were already over 100 students in line and those students are typically holding spots for other students. The student also pointed out that in the nosebleed seats where the students sit in the South that the band cannot be heard. I heard from one alumni (a current season ticket holder) who indicated they did not care for the general admission policy for students and felt that since they were paying for tuition that the students should at least be allowed to have their own seat.

Compare that to other ticket holders, who can arrive when they want because they a guaranteed a seat. They can easily sell their tickets without the same constraints.

One more item to add about the student sections. The South student section is where the underclassmen sit. They typically stand throughout the game (which is the reason they were shoved into oblivion in the first place), and in doing so they pack themselves in like sardines at the bottom of the section. (We did the same thing when I was a student. I remember at the 1982 Nebraska Oklahoma game, there were so many people in our section that didn't belong, I took a pop and dumped it down a guy's back multiple times to get him and his girlfriends to leave.)

Paul Favela, Husker super fan sombrero guy(probably the only "TRUE FAN" among us) stated that he feels like regular ticket holders should be held to the same standard as students and pointed out how many people leave the games early, and sent photos of the stadium showing empty seats during the UCLA game.

Of the "I paid to be here" argument, Favela said both sides are guilty:

And then these same people accuse ESPN and ABC and the B1G and the Taxslayer.com bowl of making college football too much about money. And It shouldn't be about money. It should be about pride in your school, the state of nebraska, and supporting a group of young men that are helping contribute to the economy of the state, city, and school in exchange for 3-5 years of tuition and food. The moment the "I paid to be here argument" is used is the moment I know somebody has lost sight of what it means to be a Husker fan.

Nebraska recently expanded the stadium, and in doing so, depleted the waiting list for season tickets. Making decisions about the student section needs to be handled delicately and with the students concerns in mind. I don't have a lot of hope for that. Years ago my Mom told me (and Mom was always right) to remember that "institutions are run for those that run them, not for those that use them".

Beating on today's students will result in the loss of that sellout streak, one that Sipple points out in the article linked above as "being sacred". Losing the sell out streak won't be good for anyone.

Hello Husker!
As football season nears, we'd like to review the delivery of your student season ticket to your N card, its usage and some instructions on how to transfer your ticket in the event you are unable to attend a game.
• Students with a South Stadium ticket enter and exit at Gate 24 only.
• Students with an East Stadium ticket enter and exit at Gate 23 only.
• If you have your N Card replaced, you must notify the Ticket Office no later than 2 p.m. on the day preceding the next home football game.
• There will be no student admission to Memorial Stadium without an N Card.
• If your photo is unrecognizable, you must have another photo ID (driver's license) for verification.
• N Cards are not transferrable. ‘Borrowed' ID's will be confiscated and turned over to University officials.
If you wish to transfer your ticket, here's how:
1. Log in to your account on huskers.com the same way you did to purchase the tickets.
2. Click on My Account and select Transfer Tickets.
3. You will see the game of that week displayed. Select the seat.
4. Enter the recipient's name, email address and daytime phone and confirm. This has to be the person using the ticket, not a middle man.
5. You may cancel a transfer before the recipient accepts the transfer, but after acceptance it cannot be reversed.
6. It is your responsibility to advise the recipient of the following:
i) Tickets transferred to another UNL student will be sent to their N Card
ii) Tickets transferred to non-students will be sent to the recipient's email after they have paid the upgrade fee. They must print the ticket onto 8.5 x 11 paper and present to the ticket taker upon entry into Memorial Stadium.
iii) Please advise the recipient if the ticket is in South Stadium (enter Gate 24) or East Stadium (enter Gate 23).

Rules for Student Ticket Transfers
• Transfers will be available the Monday preceding a game for that week's game only. Future game tickets will not be available for transfer until the week of the game.
• If you have a student season ticket on your account, you cannot receive any other (transferred) tickets on your account.
• Ticket transfers must only go to UNL students that do not have a season ticket on their account (free of charge to their N card) or to a non-student, who will pay the upgrade fee with a credit card and receive a print at home ticket.
• Tickets can only be transferred one time. A transferred ticket cannot be transferred again. Please transfer only to the person that intends to use the ticket.
• Please be sure to log in to the student sign-in page on huskers.com any time you wish to manage your own account. You will login with your N card number. Also, be sure that you sign out of your account before anyone else uses that computer!
• You must process through the entire transfer process by clicking on Check Out and Submit, even if you are not paying a fee. If this is not done, the transfer is not valid.
• If you aren't sure your ticket transfer is going through properly, i.e., a student is being charged an additional fee or a non-student is not being charged the additional fee, please call the Ticket Office at 800-8-BIG RED before you accept the transfer. We will be happy to troubleshoot any issues and assist you through the process.
• If you have already processed a transfer to a non-student and the upgrade fee was not charged, you may have done this while the system was updating information. If the upgrade fee was not paid, that ticket will not be valid. Please contact the Ticket Office for further instructions.

If you purchased a spouse or dependent ticket, these will be printed to paper and may be picked up beginning Monday August 26 at the Ticket Office. You must present a marriage license (for a spouse ticket) or birth certificate (for a child ticket) for verification at the time of pick up.

As a reminder, if you wish to have your ticket refunded, requests must be sent by Wednesday August 28, in writing, to the Ticket Office. A credit of $184 will go back to the original form of payment.