Nebraska's game against Illinois left us feeling like we'd had the recommended single serving size of delicious mint chocolate chip ice cream when really we wanted the single serving size, in other words somewhat dissatisfied and wanting for that reason - here's five things we're still angry about from last week's game.

Given that attitude, here's five things from Saturday's game we're still angry about. Old man angry, too, you know that kind that's always there under the surface, just waiting...

Let's go back to last season. Nebraska 29, Northwestern 28. In a simplistic view, using simple math, we lose by one.

Nebraska 30, Wisconsin 27. Eschewing simple math and understanding the flow of the game, if Nebraska would have missed a PAT early in the game they would have been forced at some point to score a touchdown and go for two instead of being letting Brett Maher finish the game out by kicking 38 and 41 yard field goals.

PAT's ARE IMPORTANT. They're the details. We take them for granted and just like forgetting to buy your significant other flowers (or some beer, just sayin') on an anniversary/birthday/special day/just for the hell of it, when they're missing over time they add up and turn winners into losers.

I once took an Alfa Romeo into an offramp in Dallas at 90 mph. (I am exaggerating a bit because by the time we hit the curve I was only doing 70.) My future brother-in-law sitting next to me reached for the grab handle (why do you think it's there?) but the Alfa was fine. The rear never cut lose and the front end went exactly where I told it to go. Try that in an American car and you're flying off the end of the exit ramp like... well, like the difference between Imani Cross and Ameer Abdullah trying to a wide option/read near their own end zone.

You can argue all you want about whether or not Imani Cross being tackled in the end zone was a safety but in the end it doesn't matter, that's how the call was made. What does matter is why Cross is running that play in the first place. It's not so important if you try it in the middle of the field because if it fails it doesn't cost you nearly as much, but near the end zone, it's a pretty stupid play call. It's Tim Beck being unable to fight off his inner need for cuteness - "HAHAHAHA They'll never expect Imani to run wide on this play!"

You have to give credit to Beck for realizing his error, though, as the next series Nebraska started at its own one yard line, lined up in an I-formation and ran the ball straight ahead three times to end the half.

Or maybe not. The previous drive started at Nebraska's four with 3:16 left. Maybe Beck felt that extra three yards gave him a little more latitude for success just like the difference between 70 and 90 mph when you're heading into a cloverleaf exit ramp. Makes perfect sense to me.

(BTW, Jim if you read this, I want to remind you that you're the one that taught me about understeering and oversteering so that Alfa thing is all your fault. I'm still sorry about the BMW, though.)

"Taylor's earned it over a long period of time [so] when he's ready to go," coach Bo Pelini said Saturday, "he'll be the starting quarterback."

Sounds simple. But it never is.

Tommy Armstrong Jr. is putting on a show while Taylor Martinez recovers from an injury.
What happens when the offense sputters against Northwestern on Nov. 2, or more likely against Michigan State on Nov. 16? You know what will happen.

We need to get better at manufacturing narratives here at Corn Nation. We do. Like the "Angry Bo Pelini" narrative. We should be driving that like.. well, like an Alfa Romeo in Dallas, like you need the grab handle otherwise you're going to fly off into your death at any moment. If you can build narratives, real or imagined, more people will pay attention because there's something thrilling about flying off into death, especially if it's not really flying off into death, but something completely innocuous we can bitch about, then turn on Netflix and watch the english version of Sherlock Holmes.

Is there a quarterback controversy? I say yes. I agree with Mitch Sherman. I know that in doing that, it tugs at one of the core beliefs in all sports, that the backup quarterback is the greatest player in the history of all sports everywhere and he'd prove it if you only gave him a chance, you bastard head coach ______ (fill in name here).

Most of the CN staff says no. They say that Tommy Armstrong Jr has played two games against SDSU and Illinois and that those games don't count for much against the stats that Taylor Martinez has put over over the last three years.

I say "What happens if Taylor Martinez sputters..."

4. Bo Pelini and John Papuchis Yelling At Each Other In Front Of Everyone

I didn't want to use this one, but Husker Mike already covered the 12 men on the field stuff Sunday in his report card.

What was up with Bo Pelini and John Papuchis yelling at each other on the sideline?

Don't they know they're supposed to reserve that stuff for behing closed doors, keep it in the family and all that? Never mind that they might be a couple of competitive Italian guys on the same coaching staff, and everyone knows that Italians are good at explosions, not hiding their tempers, and great at coaching defense if they've got a NFL caliber defensive tackle to plug up the middle.

It doesn't look good (see below about appearances) and it's embarrassing. Tom Osborne never did that. Ever. Not even behind closed doors. He had Charlie McBride do it. Why can't John Papuchis be more like Charlie McBride?

*Note that I have no idea whether "Papuchis" is Italian or not, but it is for the purposes of this article. Searching the internets for Papuchis yields very little information, leading one to believe that John Papuchis isn't human, but alien, and probably changed his name, not wanting to be recognized as John Bigbooty.

Before every home game ever in the history of Memorial Stadium (or so it seems), Nebraska's media gets to the press box before the game and begins to complain about the student section not being full.

They're right. It's not full.

It's an eyesore because the entire rest of the stadium is completely full and there's that little blotch on an entirely full stadium up in the corner. Husker Mike says it looks bad on flyovers.

The students should be punished for this. They should know better than anyone that in today's world appearances are everything! Substance took a back seat to vanity back in the 1980s and there are no grab handles in the back seat (gut rolls don't equal grab handles in this case, get your mind out of the gutter), meaning appearance has been beating the holy crap out of substance for least a couple decades now.

Have Matt Davison call them out on the radio! (Done.)

They should take away their tickets!

They could institute a strikes policy for students who don't use their tickets. Georgia has this and basically, three strikes and you can't buy student season tickets for two years. The students can return tickets they don't use to not be penalized. The university then either gives those tickets to another student or sells them to the general public.

Make a tumbleweed prison, put those that don't show up in it and let it blow across the state of Nebraska as an example!

That last one is mine. I always favor public embarrassment mostly because I have no problems with embarrassing myself but for some reason other people do. I've never quite figure out that part about social behavior. That's probably why I don't get to go to nice places. 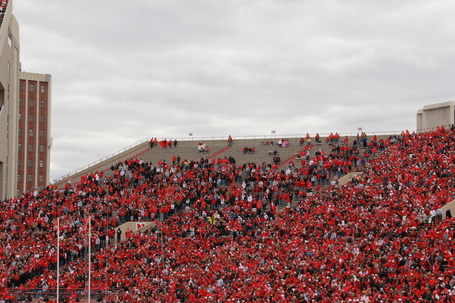 The student section in the third quarter. LOOK AT THOSE UNGRATEFUL BASTARDS!