Three Plays That Defined the Day

A brief breakdown of three plays in the second half of the Minnesota game that more or less defined the Huskers' woeful defensive outing that day.

Share All sharing options for: Three Plays That Defined the Day

So as I was watching the Nebraska game (well as much as I could stomach anyway. I volunteered to help my wife out with some errands after the Huskers started playing all asses and elbows.) I took to the interwebz to see if I could find some good pics (or hey, maybe even some video) of some of our defensive sets/formations and identify just what in the name of Poseidon happened out there. I put the word out and a couple of Husker faithful responded.  I didn't want the whole second half of the game, because when you've got a three month old son at home, it doesn't exactly leave one a lot of time for video editing.

I wanted to get this article out yesterday, but as mentioned above, my three month old son had other ideas.

First of all, I can't take credit for the play breakdowns. These were passed to me through an email that I received yesterday. I contacted the author of the email and asked if I could use them in a post. He reported back that the original author of this said "no problem." Sweet. I will add names of the players where I can ID them and try to explain more where I feel the author may have been overly brief.

So here are three plays that I feel really defined how the day went for us. You ready to get started? I know you are!!

An odd formation to be sure, especially since it's illegal (you can't have five in the backfield).  So Minny has no choice but to shift out of this formation. 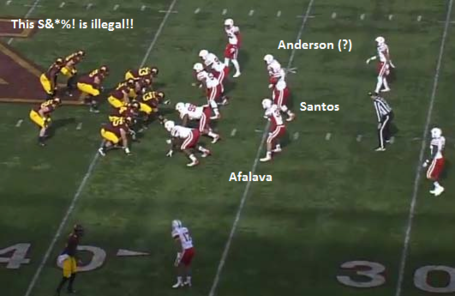 So what do they shift into?  Glad you asked.

They shift into an empty backfield, unbalanced right, with a devious wrinkle.  Eligible receivers are circled.  They take their RT and flex him out to the right.  They also have a TE that is lined up as an LT.  "WTF" you say?  "Yes indeed," I say. 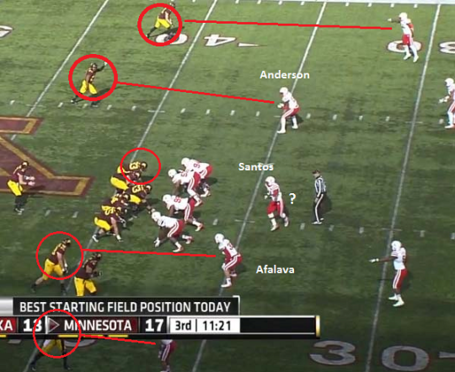 Nebraska was in 4-3, with two safeties about eight yards off the LOS before the shift.  After Minny shifts, we remain in our 4-3, go man coverage, move our safeties back 10-12 yards, sliding our OLBs out over their inside receivers.  Afalava is covering the inside receiver on the right, Anderson(?) is covering the left inside receiver, and Santos is well...wandering away from his assignment counting his toes or something.  He's left the TE (lined up as an LT) uncovered.

"So Mister Mike, what happens next?!"

I am glad you asked, dear reader. 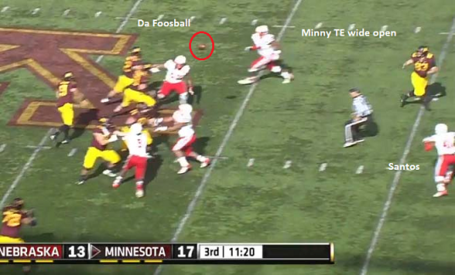 As you can see in the well formatted photo above, the flexed RT is faking the bubble screen and #83 (the TE) is wide open for a quick pass.  Santos realizes this as soon as the ball is thrown, but almost breaks an ankle doing one of those NCAA 14 like defensive back recoveries (you know the ones where you totally fake out the defender?  Yeah, like that...) and makes the tackle 21 yards down field later.  1st down Minnesota.

You want some more?  You bet you do.

Minny lines up in the shotgun in 11 personnel with the TE lined up as a wing to the QB's left.  Nebraska's rolling with their nickel defense. They moved Anderson out to cover the slot receiver on the right.  Gerry is playing DB and Santos is the other LB.  Nebraska's still playing what appears to be Bo's preferred 2-high safety look, with man coverage. 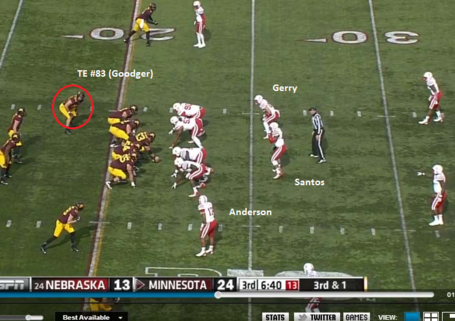 Before the snap, Minny motions their TE (#83, Drew Goodger) to the right, essentially creating a 3x1 formation or "Trips Right."  Gerry follows the motion (the TE). 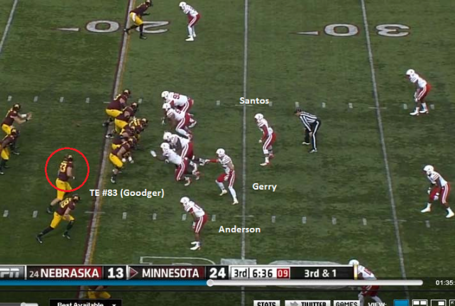 At the snap, the QB rolls out to the trips side.  The RB heads out of the backfield towards the flat.  The TE (#83 again) cracks back on #55 (Kevin Maurice, I think) who has lined up as a DE.  Santos flows play side, Gerry has outside leverage. 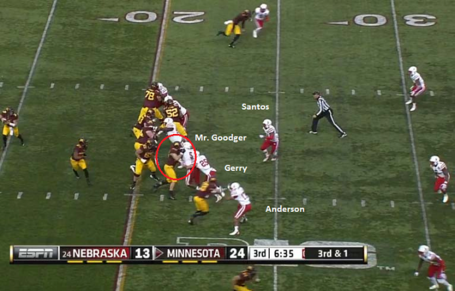 This is where things become fuster-clucked.  It appears the Gerry's eyes are on the RB or QB, and Santos is still flowing play side.  Gerry and Santos probably should've have switched coverages to contain the rollout by the QB.  Santos recognizes what's going on too late, and the TE comes off his crack and ends up behind Santos for an easy 16 yard completion.  Bazinga.

One more time folks?  Alrighty then...

This is a play that Jon had asked about, so this is in there for the fearless leader of Corn Nation.

Minnesota lines up under center in 12 personnel, with Twins to the right.  Take note of a few things: the unbalanced line, the fact that the LT is uncovered, the TE is convered, and that neither TE has their hands in the dirt.  This signals a likely shift.  Nebraska is again rolling with a 4-3, 2 safety look.

Sure as hell, the TE's flip to the left, the CB and S trade and the LB's shift over to the strong side of the formation (with the TEs).

Here comes the infamous "jet motion."  #14 runs like hell to the strong side.  No one on the defense moves an inch. 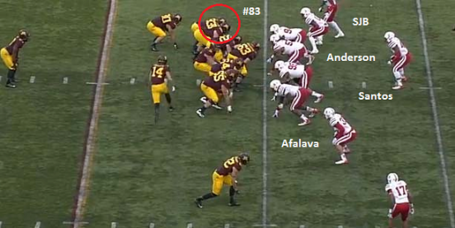 Play action.  Minny fakes the stretch play to the left.  Notice the TE's running counter action to the other side.  It appears one of our LB tries to get jam on one of the TEs.  Which one?  Yep #83...Mr. Uber Tight End Drew Goodger himself. 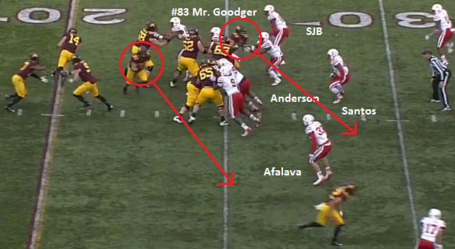 The play is a bootleg.  Afalava doesn't move, keeping his eyes on the TE running a shallow drag route.  Santos continues to press towards the LOS, and doesn't see Mr. Uber Drew sneaking out behind him, the jam not knocking him off his route hardly at all.

The TE's are able to establish separate drag routes over and under the LB's and since Santos doesn't see the TE, the pass is complete for a nice 31 yard gain.

Now these are just a few plays that have been noted, mainly because it was mentioned so prominently by the Minnesota players and their staff that their TE's (specifically number #83) haven't been active much at all this year.  Also because this was just a microcosm of what kind of shit-tacular day we had on the defensive side of the ball.  Well these were the plays where their TE roasted us like a Thanksgiving turkey.  Drew Goodger had just 3 catches for 33 yards coming into this game.  In this game alone he had 3 catches for a total of 68 yards.  He doubled his output and extended critical drives for Minnesota in the 3rd quarter.  Why were never able to adjust to their motion and the fact that they were able to get Goodger (HAH!) one-on-one with our LBs and Santos specifically over and over again is a confounded mystery.

Limebeck (Minnesota's OC) called a great game, and unlike our own play calling, was able to find a weakness and exploit it over and over and over again.

Guess what dear reader?  It worked.  And now you know why.