Oklahoma Joe's is a relative newcomer to the Kansas City barbeque scene.  Back in the 1990's, the Slaughterhouse Five competitive barbeque team started winning so many contests that people suggested they open a restaurant. Eventually they did.

In a gas station.

In the matter of a few years, they went from being relative unknowns to being widely regarded as one of Kansas City's best. People flock from all over the region, if not the entire nation, to the gas station/barbeque on west 47th Street.  They've opened two more locations, and that still hasn't satiated Kansas City's appetite for Joe's BBQ.  Just look at the people lined up OUTSIDE the restaurant on Saturday afternoon to eat in. 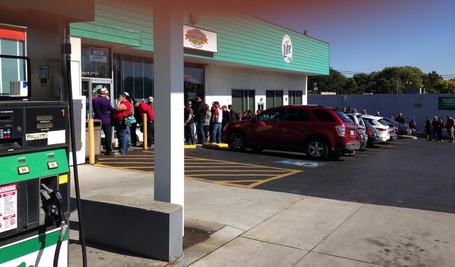 Even more are inside.  I suspect that the wait probably was 90 minutes at that point. I don't try to wait in line; I place my order over the phone and get it to carry-out.  My kids don't appreciate barbeque all that much, and besides that, the kids menu is pretty sparse.  So why fight it?  Place the order by phone, and pick it up when they tell you it's going to be ready.  (Yesterday, it was an hour wait...but I could run other errands in the meantime.)  Head back to the hotel, and then savored some of Kansas City's finest barbeque.

My wife usually orders their specialty, the Z-Man sandwich.  Named after a former radio host, the Z-Man consists of beef brisket, provolone cheese, and two onion rings.  It's a great sandwich, but if I'm going through all that effort, I want more.  This time, we chose the brisket dinners; I added a the smoked sausage.  Both were everything our Bryant's dinner lacked.  The brisket was savory and melted in your mouth.  Likewise with the sausage.  You didn't really need the sauce, but I still couldn't help myself.  Our sides were the red beans and rice and french fries.  The fries are highly seasoned and downright addictive.

So how did Joe's grade out?

Meat:  A+  Both the brisket and the sausage were tender, juicy, and flavorful.  This barbeque doesn't need sauce; it's a winner by itself.

Sauce: A  But you are doing yourself an injustice if you bypass the sauce.  It's a rich mixture of ketchup (yep), brown sugar, and spices that's probably the best I've ever tasted.  If you like yours with a little extra kick, they have the "Night of the Living BBQ" sauce with more heat, though jalapeno aficionados will undoubtedly find it lacking. I have to admit that I grabbed a little extra sauce to salvage my leftover brisket from Bryant's.

Sides:  A  The fries might be the best I've ever tasted, and a single order was enough for two people.  Love their red beans and rice as well.  I usually save some of it for leftovers, and usually add extra rice to stretch it even further. One of these trips, I'm going to have to try their baked beans.