The Corn Nation staff hands out their midseason awards for the best and worst of the Big Ten's college football season so far.

It seems like only yesterday "Blurred Lines" was in the midst of its summer long reign as Earworm Champion of the Universe, "The Daily Show" proved it could survive (and thrive) without Jon Stewart, and we were all eagerly anticipating the kickoff of the college football season and all its glory.

Well, believe it or not, we're already halfway through the 2013 edition of the greatest sport on earth. Instead of brooding at the thought we've already knocked out a good chunk of the season, we at Corn Nation thought it'd be a better use of our time to celebrate the best and worst of the Big Ten's year so far.

We present to you, Corn Nation's Midseason Awards...

Before Kevin Wilson's breakthrough win against the Nittany Lions, the Hoosiers were a sultry 0-16 all-time against Penn State. The result by itself would probably be enough to make this the runaway choice in this category, but the fact the much-maligned Hoosiers held Penn State to 70 yards on 31 rushing attempts made this selection a no-brainer.

It'll be interesting to see if the Hoosiers can carry this momentum into the second half of the year.

In terms of quarterback play, the Big Ten conference was like the Cleveland Browns of the college football world. The conference's signal-callers were either hurt, replaced, or flat-out bad.

The marquee quarterbacks - Taylor Martinez, Braxton Miller, and Kain Colter - all missed significant time due to injury. Minnesota's Phillip Nelson was injured and subsequently replaced by freshman Mitch Leidner. Purdue's Rob Henry performed so poorly they exiled him to defense and pulled the redshirt off of freshman Danny Etling. Devin Gardner was a turnover machine and is clearly uncomfortable with whatever Al Borges is doing up north. Michigan State's quarterback situation was like a game of hot potato. 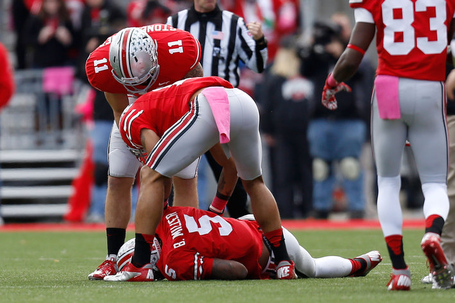 When the world was first introduced to this classy lady, I joked about what was going to be higher; Vodka Samm's .341 BAC level or Iowa's winning percentage at the end of the year.

Well, the Hawkeyes are 4-2 and only need to win one more game the rest of the year to top Svedka Sammie. NO PRESSURE.

Words don't do this one justice.

Man, how did Michigan NOT win this category?

Game of the ½ Year

Christian Hackenberg became a legend, kickers Brendan Gibbons and Sam Ficken tried to out-goat each other and Brady Hoke went into a shell. Like a Ninja-Turtles-fell-into-the-ooze-and-got-super-huge-sized shell.

We dare the college football gods to give us a better game this year than this four-overtime thriller.

The Urban - The Douchiest Person or Act

Former Nebraska standout Irving Fryar and his mother, Allene McGhee, were charged with conspiring to use fraudulent home equity loans to steal $690,000. Yes, this story is as odd as it sounds.

The Notre Dame - The Most Overrated

Fitz Touissant could probably fall down and gain more yardage than the Michigan offensive line could generate.

The Wolverines with the clean sweep! #HAIL

YES! We now have an excuse to post BERT's Hog Walk of Shame.

TIE: Michigan, for their fourth-quarter punt against Penn State - and - Iowa, for not wanting to field punts anymore

To Iowa's credit, at least they flat out admitted their strategy. Nebraska on the other hand...

Play of the ½ Year

The Eminem interview during the ND-Michigan game

Brent Musburger's reaction to Ohio St. covering on the last play of the game against Northwestern

What do you think of our selections? Let us know!