[The following was done by Paul A. Dalen and is being published per his permission. This is the first of three parts. Full data will be provided in a PDF attachment in Part 3 - Jon Johnston]

Which was the Most Impressive 5-Year Dynasty?

There are myriad ways to compare the five-year dynasties that Nebraska and Alabama have put together. Some indicate NU's was more impressive, others indicate that Bama's was moreso. This is my attempt to compare the two using defensible statistical analysis. It is not the final word on this issue; I'm doing it simply to attempt to get at the question of who accomplished more during their five-year run.

I'll look at four major comparisons; scoring versus opponents broken down by the opponents' end of season rank; and percent of average season offense and defense that NU/Bama produced or allowed in each game; Win/Loss Record; and strength of schedule.

Let's begin with the easy stuff.

Please note that NU's graphs are discontinuous at the 111-120 opponent rank category. NU played no opponents that finished with an end of season Congrove ranking of 111-120. All t-tests are evaluated at the alpha=.10 level of confidence.

Figure 1 illustrates the average points that NU/Bama scored when I categorize opponents by end of season ranking. For simplicity sake, I used the end of season Congrove Composite Index. Using the end of season ranking is better because it: 1. is actually available and 2. goes a long way towards to identifying teams that were ranked at one point in the season but should not have been or who were unranked or lower ranked but proved to be better that season.

As you would expect, as the opponents' rank goes down, the average score that NU/Bama hung on that team climbs. I put a red box around the first three points, the ‘red zone' if you will, to show the average points scored against teams that would have finished ranked in the polls. 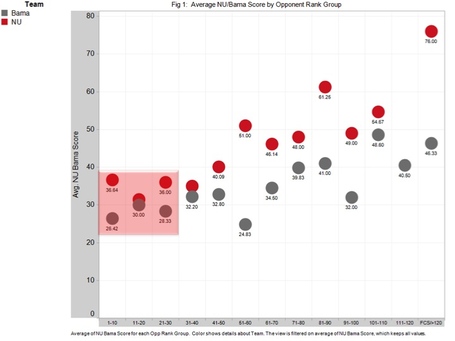 For opponents of all ranks, NU's average points scored is markedly higher. For all ranks, the average NU score is 42.82 and the average Bama score is 33.84. A standard t-test indicates that the difference in average score, regardless of opponent rank, is extremely statistically significant. More importantly, the same t-tests conducted by opponent rank category gives the same result for all opponents ranked between 30 and 100 and for opponents ranked >120 or FBS schools. The conclusion to be drawn from this is clear: for the five year period, NU's offense was superior to Bama's.

Figure 2 illustrates a very similar comparison, but it compares the defenses that NU and Bama put on the field by measuring the average opponent score, again broken down by end of season rank.

For teams ranked in the top-10, the difference in scoring defense is small. For NU, it's 18.2, for Bama it's 20.2. For most other opponent rank categories Bama has a slight performance advantage, ranging from about 3-7 points. 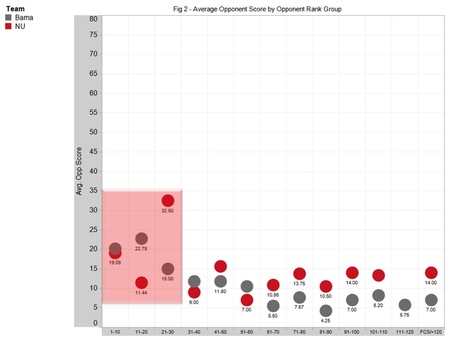 Interestingly, NU's scoring defense against teams ranked 21-30 seems out of place in what is otherwise a very consistent scoring defense. There are only two scores for NU in this opponent category: KSU in 1993 (W, 45-28) and Texas in 1996 (L, 37-27). The small sample size and high opponent scoring in those games accounts for this spike.

The average margin of victory by NU and Bama increases as their opponents' rank decreases. Both show a steady and reasonably linear relationship between average MOV and opponent rank. The exception is NU's average MOV against opponent's ranked 21-30. As I noted above, this is because there are only two games here, and NU lost one of them, leading to a much smaller average.

Generally, we can state that both teams did what great teams as supposed to do...they consistently beat other teams up. As their opponents' rank decreases, those beatings are more severe. In the ‘red zone', it's worth noting that NU's average margin of victory against teams ranked 1-10 was more than twice that of Bama's (14.4 vs 6.3). Against teams ranked 11-20, NU's average MOV was almost three times that of Bama, (20.0 vs 7.3). 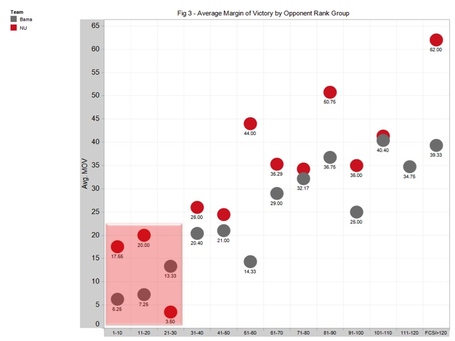