Hashtagging is a fad followed only by a select few and long since corrupted by the snarky. If Nebraska was going to paint something on the field, it would have been much smarter to post the @Huskers official Twitter address.

This weekend, Nebraska becomes the latest athletic program to join the latest "social media" fad by painting a "#HUSKERS" hashtag onto the Tom Osborne Field turf. Like bell-bottom jeans and the "Call Me Maybe" remakes, it's a fad that, frankly, hasn't made much traction other than with people who actually use the term "social media." 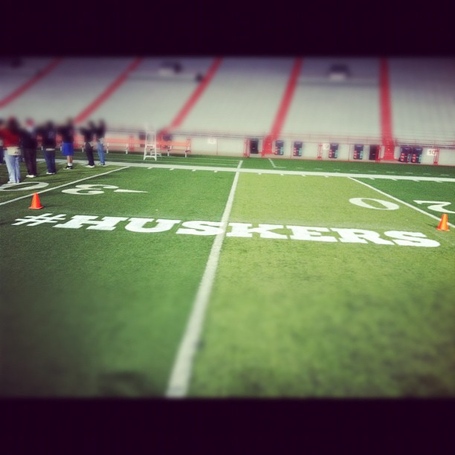 Nobody really uses hashtags the way they were originally designed.

Well, that's not completely accurate. Some people do use them, but they are a small minority in the grand scheme of Twitter users. (Kind of like when people say that "nobody cares about Nebraska basketball"; that's not precisely accurate, though it is safe to say that there are other things people are more interested in.) "Social media" experts probably will disagree with me, but I also point out that the only people who use the term "social media" are the practitioners and consultants about all the latest rage of web sites and internet apps that help us communicate. Nobody really outside of that overpriced "guru" world uses the term "social media"...and few use hashtags the way they were intended.

Nebraska tried to define hashtags for each game last year (#NUvsUW, for example) with almost no success. It had almost as much staying power as MySpace. So now the trend is to push the brand as a hashtag. If you watched Nebraska's game against Idaho State on BTN last week, you probably noticed #huskers under the BTN logo. Now it's on the field. So how will it work?

Probably not much better. People tweet in rapid fire bursts; it's typically off-the-cuff and frequently people aren't planning their Tweets. They typically do them on their phone and contain errors. And with a 140 character limit, wasting characters to hashtag something is something that can't be afforded much of the time.

And for the most part, it's pretty irrelevant. Recent updates to Twitter make it easier to search for hashtags, but it's still redundant. Search for huskers on Twitter and you'll find lots of mentions of the Huskers; some tag their Tweets this way...most don't.

So what's the big deal about putting a hashtag on the field? It's that it's a wasted opportunity. They shouldn't have hashtagged the field; it should have been @huskers to remind everybody where to go on Twitter to find out Husker information. CBS and Fox now identify many of their announcers by their Twitter handles; it's a good practice to get you in contact...and keep you in contact with their personalities.