Count Down to 2012: Battle for the NU Trophy

Share All sharing options for: Count Down to 2012: Battle for the NU Trophy

One less day than yesterday means we now have only nine days before football. Nine, as in the lives of a cat, a very important spirit animal here at Corn Nation. I imagine that soon we'll have a collection of cat pictures that we can point to and say "those cats won us a national championship". We're not going to talk about that today, however.

Today, we're going to talk about one specific cat that represents a lingering issue at Nebraska. The Northwestern Wildcats. Representatives of a small private university in Evanston, Illinois. A school which makes a claim to the two-letter moniker "NU".

Nebraska's entry into the Big Ten was frought with controversy over this moniker as Nebraska was also known to use "NU" to signify their sports teams. Even our fight song "There is No Place Like Nebraska" has a reference to Nebraska U (NU). So it was more or less decided that the winner of the game between Nebraska and Northwestern could claim the NU.

On paper, Northwestern had no shot at dethroning No. 9 Nebraska who had just dismantled Michigan State 24-3. As it usually goes, we were wrong as Northwestern cut Nebraska down to size and earned the 'NU' trophy, winning 28-25 on my birthday. 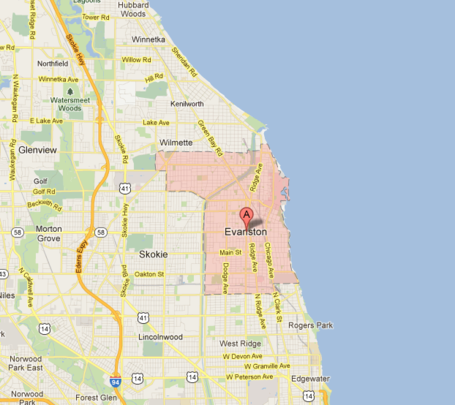 (More after the Jump.)

Of course, Northwestern wasn't satified with that one victory over Nebraska. Oh no. They would proceed to absolutely obliterate our men's sports, as I indicate in the table below. Their women's sports would also have good seasons, knocking off our excellent volleyball and basketball teams. (Nebraska did beat Northwestern at debate, so there is that.)

Battle for the "NU" Trophy

(Northwestern does not compete in men's cross country, track and field, or gymnastics.)

So where do we go from here? I think it's safe to say that we don't want to be Iowa and be ruled by Northwestern. So how do we take down Northwestern and win back the NU?

Because this countdown is for football, I'm going to concentrate there. I couldn't begin to tell you how we beat Northwestern at golf, baseball, tennis, wrestling or basketball. (Or football, really, but hey, let's pretend.)

I originally had written up nine things I quickly surmised from last year's game but decided that such things are best left for when we have a better idea of how both Nebraska and Northwestern behave this fall. As Husker Mike indicated yesterday, year to year comparisons are weak at best.

So instead, I simplified it down to three things to watch for this fall.

Nebraska's offensive line struggled mightily against Northwestern until late in the game when Beck called a bazillion pass plays. If we want to control time of possession, we'll need to establish a ground game early. (And it wouldn't hurt if Martinez could make some better reads against NU's defense.)

We're all guilty of that last year. Of course, I'm already guilty of that this year, having already called our loss last season "charity". But the truth is, Northwestern is one of those thorny teams that has a way of flying under the radar until it hits you in the balls.

Most of all, if the fans keep a level head, we'll keep the players who mistakenly read blogs from getting over-excited or cocky. We can't afford losing to Northwestern if our goal is a shot at the Big Ten championship and the Rose Bowl.

3. And for the love of all things good and holy, STOP USING "NU" FOR NEBRASKA.

We didn't earn it last season and it just makes things worse every time you use it. Think of it as a kitten being harmed every time you refer to Nebraska as NU.

Use UNL or NEB. Please. Think of the kitties. 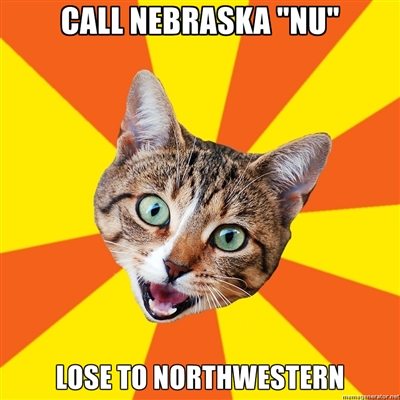