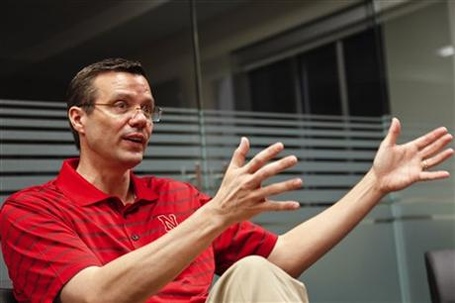 A month or so has passed since the Spring Game that wasn’t came and went. At the time all anybody could talk about was the incredible recruiting weekend that it was for new Nebraska basketball coach Tim Miles, and it was. Never before had a coach brought in a collection of talent to visit our fair campus. Within a few days the fervor died down, but that doesn’t mean coach Miles did. Here’s a rundown of what’s happened since then:

April 19: Deverell Biggs , former Omaha Central standout point guard, became the first player to sign a letter of intent for Coach Miles at Nebraska. He also became the first in-state recruit since 2002 when Barry Collier brought in Jason Dourisseau, Roy Enright and Wes Wilkinson. He was also a JUCO all-american and should bring a level of athleticism that has been missing at NU from the guard position since Nate Johnson graduated. There had been some discussion of Biggs redshirting next season to potentially give his former Central teammate and top NU recriting target, Akoy Agau, two years to play together. Agau has not committed to NU yet.

April 25: Miles announced the addition of Gregory Eaton and Craig Smith to his staff, both of which were on his staff at Colorado State.

April 27: After a meeting with Tim Miles, former NU star, Erick Strickland was informed that Miles would go a different direction to fill his final spot on his coaching staff.

May 3: Desperate for help inside, 7’ 1" center, Sergej Vucetic signed a letter of intent to play for Nebraska. The Serbia native had been playing at a prep school in Michigan where he averaged 19 points and 14 rebounds. He had been drawing interest from schools such as Illinois, Marquette and Vanderbildt.

May 11: Coach Miles finalized his staff by adding Chris Harriman who had previously been working for Rick Majerus at Saint Louis University. Harriman is an Australia native, so that whole thing about not recruiting foreign players might be out the window.

May 13: Former Texas Tech power forward Terran Petteway signed his letter of intent and will transfer to NU where he will have 3 years to play after sitting out the coming season. He didn’t do much in his freshman campaign for the Red Raiders but was a prolific scorer and rated as one of the top 10 players in the state of Texas coming out of high school averaging more than 27 points his senior year. What Petteway is really known for is this little scuffle with Connor Teahen of Kansas in January, for which he received a 1 game suspension. Miles calls Petteway "dynamic". Nebrasketball could use some of that.

May 14: Nebraska’s opponent for the 2012 Big Ten/ACC Challenge is announced. Wait for it…Nebraska will be traveling to…North Carolina…to play Wake Forest! Everybody celebrate! Nebrasketball will be out for vengeance, I’m certain. Winston-Salem is nice in November, right? Right?

May 17: Omaha Central standout forward, Akoy Agau received an offer from UCONN. The Huskies should be considered the favorite to land Agau who has been fairly open with the fact that he’s been a lifelong fan of the school. This will be a huge challenge for Miles to land the prospect.

May 18: Christopher Niemann was awarded a medical hardship. He will remain on scholarship, but it will not count towards NU’s scholarship limit of 13. He is on track to complete his degree. His playing days are finished.

So, that should bring you up to date with the happenings around Nebrasketball. Check back for another roundup sometime after the Fourth of July unless significant events warrant further discussion. Happy summer!