No doubt about it, the last few weeks have been trying times for Nebraska Running Backs Coach Ron Brown. Back in March, he appeared in front of the Omaha City Council to defend an employer's right to can a gay employee for making him or her feel creepy thus rising in defense of the Word of God. There were some biblical references, thundering on about Pontius Pilate, and vague promises of supernatural retribution from above, but, in the end, council members decided the risks of global flooding, strategic lightning strikes, etc. to be minimal at best and the ordinance passed.

There was some local furor, but Brown appeared to have skated nationally until Lincoln looked to adopt a similar measure. When speculation began as to whether he would put on a fire and brimstone sequel, the national pundits were ready.

Arguably best well-known of these was Rick Reilly. The ESPN columnist, who takes hissy-fit offense to things as strongly as anyone, fired a salvo in his column late last week. (It should be noted that Reilly, a Boulder, CO, native, somehow managed for years to not be offended by former Buff coach Bill McCartney's strong and public anti-gay views when they were in his back yard. However, now that they are coming from straight down his nose in backwards-ass Nebraska...well, you do the math.)

However, as much as it pains me, I agree with just about everything in that column. Reilly, as well as others without an anti-Nebraska axe to grind, have all made some pretty legitimate points.

Now when Brown and wild-eyed lunatics rail against homma-sex-shuls being afforded the same basic rights as anyone else - you know, get married, serve in the military, not be fired or not hired for no good reason, etc. - even the most dim-witted realize that when asked why they feel that way, "Because, eeeww!! I mean, it totally grosses me out, dude!" will not be a response well-received by others.

No, no, they instead swell with the power of Christ and belt out those oft-quoted verses from Leviticus that they believe provide the biblical justification for imposing 2nd class citizenship on these abominations.

20:13 If a man lies with a man as one lies with a woman, both of them have done what is detestable. They must be put to death; their blood will be on their own heads."

Good stuff! Not only are gay folks detestable, you're allowed to kill 'em! 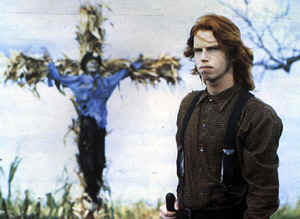 YESSSSS!!!
Okay, step away from the butcher knife, Malachai (1), that's just a joke. And therein lies the problem. Most folks who take the anti-gay stance selectively cherry-pick Quote #1 and stop short of Quote #2, realizing that your average person on the fence about gay rights will not 1) condone the murder of the gay community and 2) bother perusing the Old Testament to see just what other madcap "rules" were laid down from above.

However, laid down they were and it's safe to say that even the truest of true believers regard them as whacked out and loopy. But knowing this, they still hold fast to Quote #1. You know, because that's the one that God really meant.

However, Ron Brown is not a hypocrite. It's a little-known fact that he follows the rules of Leviticus and Exodus to the letter. However, while it cements his reputation as a straight arrow, Old Testament livin' makes for some dicey neighborhood relations, not to mention questionable legal activity.

While creeping about the Brown residence like a teenage stalker patiently waiting for a chance to perhaps ask Coach Brown about his views, I happened to witness this exchange (2) on Brown's front porch with a friendly neighbor who had a few questions:

"Coach Brown, how are you doing today?"

"Well, some of the kids were gonna toss the old pigskin around & they were wondering if you wanted to join in?"

"Sounds like fun, let me grab a long-sleeved shirt, my gloves and some rubbing alcohol."

"Well, touching the skin of a dead pig makes one unclean (Lev 11:6-8), you know. That's why I recommend that position players scrub profusely after practice & games. Rex slathers himself in anti-bacterial gel daily."

"Um, coach? Footballs aren't really made of pigskin - that's just an expression. Also, tell Rex that's pretty creepy and really unnecessary. But anyway, we're gonna toss the ball around a little and - what the - what's that smoke coming out of your back yard? And, ack, what's that smell??"

"Ah, Mr. Johnston, every now and then we like to burn a bull as a sacrifice. It creates a pleasing odor for the Lord (Lev 1:9)."

"Well, it creates a pretty shitty odor for the neighborhood. Is that really necessary????"

"The biblical path can be a difficult one..."

"Well, for those of us not walking it literally it is, that's for sure. Isn't there something else you can do?"

"How about this? You don't have to burn it all at once right? And for God's sake-"

"Sorry, my bad. But I was saying, I'm thinking you don't have to leave the hide and fur & all that crap on, right? How about you get some steaks? We'll take turns grilling, everyone can bring drinks and sides and we'll create an odor that's pleasing to the Lord and the local population."

"I'll even bring some shrimp over! We'll get a little surf and turf action going. How does that sound?"

"But the cookout itself sounds great. I'll get my slaves on it right away. Maurice can fetch the steaks from the market and I'll have Diego begin heating the grill."

"My slaves. Maurice and Diego."

"Their possession is perfectly sanctioned. They were purchased from neighboring nations. (Lev 25:44)"

"I'm pretty sure that's against the law?"

"I would be proud to go to jail for obeying God's laws!"

"You may get your chance on that one, chief. Well, anyway, my old lady's going to bring you over some tomatoes and cucumbers from our garden. We can't eat them all, so she's going to be handing some out up & down the street."

"You are planting two kinds of crops in the same field??"

"This is a violation of Leviticus 19:19. As is wearing a garment made from two different kinds of thread - that Husker hoodie! That's a cotton-polyester blend, is it not??"

"Please wait here, Mr. Johnston. I am going to fetch my daughter and gather some large stones. The bruises and cuts will heal and you will be a better man for your punishment."

"Of course I will. Wait a minute. I thought you had two daughters."

"I did. We sold our oldest into slavery to pay for the new rec room. OK, there's that look on your face again. Just stop it, Exodus 21:7 sanctioned the sale."

"Have a blessed day. I'll pray for your soul as well as the souls of all the doomed queers that Nebraska employers are forced to endure."

(1) - There may not be a better trove of unintended comedy on DVD that the original Children of the Corn. Do you think Linda Hamilton talks this one up when discussing her body of work? And can you help but watch it without thinking that John Connor's mom Hamilton from T2 would wade through those psychotic little shits like Willie Miller through a pack of teletubbies? And isn't Malachai one of the greatest movie icons from a completely crappy movie there is? Besides Jason Voorhees, I mean? OK, I'm babbling now.