Share All sharing options for: Nebraska Baseball: Getting To Know Purdue Baseball

Purdue baseball comes to Lincoln this weekend, leading the Big Ten Conference by 2.5 games. The Boilermakers are having a historic season, or at least I think so. Given that I'm not too familiar with Purdue's baseball history, I figured it was best to reach out to someone who is, so after the jump is a Q&A done with BoilerTMill of SB Nation's Purdue site Hammer and Rails.

It is definitely growing. Michigan and Penn State have excellent new facilities, and Purdue's brand new Alexander Field will be done soon (though, unfortunately, not in time to host a potential regional). I've noticed in my baseball coverage that Purdue fans are very excited about this team. Our home opener against Louisville was one of the first games in program history where both teams were ranked, and drew an excellent crowd.

Purdue is also in the position it is in because it has scheduled tough opponents. In two weeks we go to UCLA for three as out Big Ten bye, which is about as tough as they come. We also have nice wins this year at Missouri State, Connecticut, at Auburn, at East Carolina, Southern Miss, Western Carolina, and a four game split at Wichita State.

I think the problem in scheduling is that it is hard to get a Big Ten team to get a return series against a good opponent. The weather factor uses up the best home weekends, though the fact that the Big Ten has a built in by each week with 11 teams could help that with something like our UCLA series.

I know next to nothing of Purdue's baseball history. Can you give us some background?

It has been very unsuccessful. Purdue has one big Ten championship, coming in 1909, and one NCAA Tournament appearance, going 0-2 in 1987. Last year tied the 1986 team for the most wins in a single season with 37, so it is safe to say that this will likely be the most successful year in school history, and the program dates to 1888.

Are Purdue fans responding well to the team - attendance is up and fans are excited?

Most definitely. In fact, judging by the comments in an article I posted about hosting a regional earlier this week, there is a lot of frustration that the Alexander Field project was not completed sooner. It was originally supposed to be done for the first home game this year, but it now looks as if no games will be played there this season, putting us in a bind because our current home is not able to host a regional. We don't even have lights.

The fans are on board though. A recent game at Victory Field in Indianapolis had a very good crowd, but with only 18 home games it is hard to judge.

Purdue is building a new baseball stadium, tell us about what's happening there.

It is probably best to check out this article from Wednesday I wrote, as well as the construction updates. 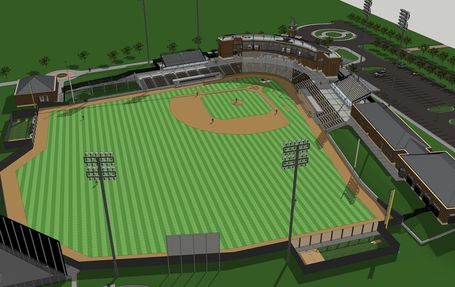 About the team - Purdue has one of the highest team batting averages in the nation. Is bashing teams into submission typical of coach Doug Schrieber's style, or is that just how it's worked out this season?

Generally we have been a decent hitting team, but this year's version has been fantastic in terms of pitching. Joe Haase and Lance breedlove have been lights out on Fridays and Saturdays, as they are unbeaten in conference play and Purdue is 9-0 when Haase starts. Both have multiple shutouts and Big Ten Pitcher of the Week Awards. Blake Mascarello has been an excellent stopper in the bullpen and has even earned six wins in relief, many from the starters keeping things at bay and our potent lineup bashing relievers relentlessly. Finally, at the end you have Nick Wittgren, who has already broken the program record for career saves and has pro scouts drooling over him.

Purdue has some pretty decent pitching depth with Lance Breedlove, Blake Mascarello, Joe Haase, and now freshman Connor Podkul has come on strong. Were there recent changes in the coaching staff that made this possible, or has pitching been one of Purdue's strong points for a while?

We've had some decent pitchers of late, but I think Haase and Breedlove have somehow just put it all together this year. We even have one projected starter Brad Schrieber (no relation to Doug), who is out for the season and he was projected to be No. 1. As you know, pitching is critical in the NCAAs, and with Haase and Breedlove at the top Purdue has a chance to make a lot of noise if they get a hosting opportunity.

What do you think about Nebraska joining the Big Ten from a baseball perspective?

I think it is a huge boost to the conference's profile. You guys instantly brought up our league's most recent CWS appearance by 17 years just by joining. My wife is a Miami Hurricane and a huge college baseball fan. The difference between elite programs like Miami and the Big Ten is night and day. Nebraska's success can only improve the conference as a whole as it tries to get out of the mid-major doldrums. The unbalanced weekly schedule can help too, as now teams have a chance to get a quality opponent full series later in the year, and maybe even at home!

Unfortunately, weather will always be a factor. Purdue played 20 games before playing a single home game, and most Big Ten schools are similar. if you don't have success on the road early like Purdue did it is very hard to earn an at large bid.