In this week's edition of miscellaneous stuff we found around the internets this week, we talk about the rumors of Corey Raymond leaving Nebraska for LSU, the pettiness of Omaha's Daily Newspaper, and the pettiness by Urban Meyer and Brady Hoke.

LSU eyeing Corey Raymond? (Lincoln Journal-Star via Rivals)
Corey Raymond could be a candidate for a secondary coach opening on the LSU staff, according to tigerbait.com, the LSU site for Rivals. This rumor may have some substance. By all accounts, the secondary underperformed in 2011 under Raymond, and it's noteworthy that Raymond was the only Husker assistant to not receive a raise after the season.

Belichick Headlines Nebraska Coaches Clinic
Bo Pelini pulled off a big name for his coaches clinic. Bill Belichick will be the headline speaker at the 2012 Nebraska Spring Football Coaches Clinic. Credit Rich Fisher for this one; Belichick's son played at the prep school that Fisher previously coached at. During his time as a golf instructor in Boston, he also tutored several New England Patriots. The rumor that every coach who attends will also receive a ratty old hoodie has not been confirmed.

N. Dakota St. AD confirmed Huskers inquired about 2012 - Sam McKewon via Twitter.
Sam McKewon of the Omaha World-Herald tweeted that "N. Dakota St. AD confirmed to me NU contacted NDSU about 2012 game, but NDSU declined because it already had Colorado State on the schedule." At this late date, it probably was tough finding an opponent to fit into Nebraska's schedule who will play only one game in Lincoln. Beggars can't be choosy, and I think we can feel assured that Nebraska tried to schedule better than Idaho State.

Steven M. Sipple: Strickland as NU head coach? Intriguing, but unlikely (Lincoln Journal-Star)
Sipple floats the name of Erick Strickland as a potential replacement for Doc Sadler after the season. I wouldn't put this past Tom Osborne, who went for the unconventional, untested Darin Erstad for Nebraska's baseball coach...but just the same, Strickland doesn't have any coaching experience. As a future NU assistant? Worth considering. Head coach? No way.

Bo Pelini won't fight ticket - Omaha.com
Bo Pelini paid a $75 fine plus $48 in court costs for running a stop sign. Not sure why the World-Herald found this one newsworthy, let alone Tweet-worthy. Or home-page worthy, as it was posted on their web site's home page most of the day yesterday. 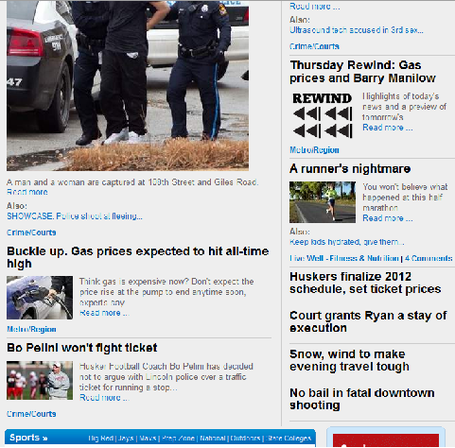 Last week, Jon wondered if some people at the World-Herald have it in for Pelini, after giving Creighton basketball coach Gregg McDermott a free pass for going nuts on the sideline while reading Pelini the riot act for similar acts. Now this. Things like this just make you say "hmmmmm...."

Carl Pelini seeking divorce (Omaha World-Herald)
Not exactly football related from the World-Herald again, but this seems to jive with some of the rumors that were floating around a year ago. Hope all works out for the best for Carl and Kelley going forward.

Big Ten Baseball Tournament Considering TD Ameritrade Park in Omaha (Husker Mike)
The Big Ten is looking for a new home for the baseball tournament, and two Omaha area ballparks submitted bids. Does anybody think that the Big XII would have ever considered holding their baseball tournament anywhere north of Tulsa? Me neither.

Change to BCS system likely to come by summer - latimes.com
Progress in evolving the BCS into the playoff system that most fans seem to be clamoring for is going to take time. It's hard for the administrators to change their tune, and there isn't any rush. Patience is in order, folks.

PHOTO: Buckeye poster lists Michigan's majors - CBSSports.com
...thus leading Urban Meyer to refer to the "Team Up North" on a new poster comparing the majors of Ohio State and Michigan players. Grab the popcorn as the Weasels and Bucknuts play like children...