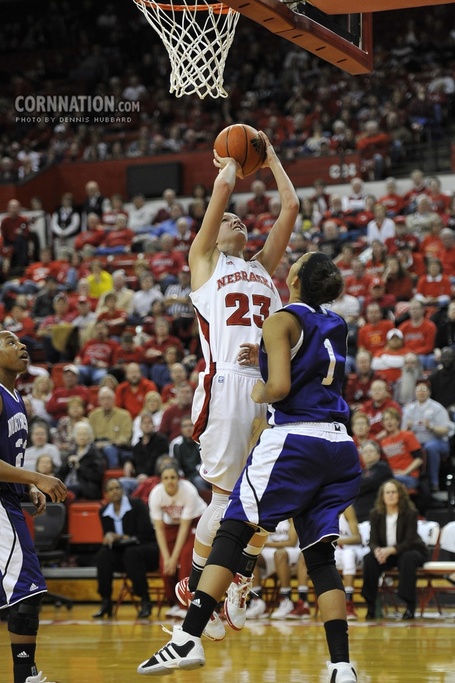 This marks the first time that the Huskers (8-5 in the Big 10, 19-6 overall) have lost more than two games in a row this season. A fall out of the top 25 in next week's rankings seems very possible.

As a side note, apparently Northwestern REALLY wants to own the rights to being abbreviated as "NU." They have now beaten Nebraska in football, volleyball, and now both men and women's basketball. With the exception of men's basketball, all of those wins would be considered major upsets. The most annoying part is that Northwestern is average at best in all of those. What's the deal? I want answers!

Back to women's basketball...

Just three games ago the Huskers beat Purdue in an epic triple overtime game, 93-89. Since that game, shot accuracy has become a major problem, and Nebraska is averaging only 54 points per game during the three game slide.

Winning the Big 10 title seemed possible before this losing streak started, but now some are questioning whether or not they will even qualify for the NCAA tournament. Will they be able to re-energize and turn things around before the season ends, or has this young team simply run out of gas?

The men's basketball team will likely be looking for a new coach at the end of the season, creating even more basketball apathy in a football-driven fan base. Some wonder if it's even possible to have a successful basketball team in Lincoln. The good news is that the answer is yes, and there already is one. The women's team probably won't be looking for a new head coach for a long time. Connie Yori has quietly built Nebraska women's basketball into a solid program. That 32-2 season from 2010 was not a fluke, but a sign of things to come.

Sure, last year was almost the exact opposite of 2010, but the 2011 squad was the epitome of a rebuilding year. There were injuries and inexperience everywhere, and the team just couldn't gain any positive momentum.

This year there is still inexperience, but it's extremely talented. Out of the starters and contributers from the bench, only one is a senior (Kaitlyn Burke), and only two are juniors (Lindsey Moore and Meghin Williams). The leading scorer and rebounder is sophomore Jordan Hooper with 19.8 ppg and 9.2 rpg. There are 6 freshman that either start or see significant playing time.

If that's not the definition of a young team, I don't know what is. Young teams usually struggle with consistency in any sport. Before this losing streak started, however, they were 19-3 and tied for first in the Big 10. Regardless of how this season ends up, it's clear that Yori has the right players to succeed.

But if this season is going to be saved, they need to end this losing streak now. Sunday is a great opportunity to get a win at home against an average Wisconsin team. The optimist in me believes that the missed shots from the past few games are going to start going in again, and this team will turn things around in time to make another NCAA tournament. Either way, Connie Yori has set this team up for a three or four year run of consistent success. For a fan base that largely goes into hibernation during the winter, the women's basketball team is definitely something to wake up and cheer for- this year and beyond.